Al Franken, the high-profile Minnesota senator, was outed for forcibly kissing and groping a radio host 11 years ago. His career is endangered. Accusations pile up against Roy Moore, the Republican Senate candidate in Alabama, for pursuing girls in their teens and allegedly assaulting one of them four decades ago. Former president George H.W. Bush faces new allegations from a Michigan woman who says he grabbed her buttocks during his presidency 25 years ago.

Two other congressmen, their names as yet undisclosed, face sexual harassment charges. Millions of dollars, it was revealed this week, have been paid out in settlements to victims of harassment on Capitol Hill in recent years. Speaker Paul Ryan says he will require all House members and staff to undergo anti-harassment training.

President Donald Trump, who makes it a common practice to fire off wrecking ball tweets, is so far steering clear of the Moore uproar engulfing his party, for obvious reasons. On an infamous Access Hollywood tape, he was caught boasting of aggressive sexual attacks. Former president Bill Clinton is lying low as well because victims of sexual harassment in the 1990s have come forward to revive their charges against him.

On Capitol Hill the tension is palpable among the country's lawmakers. Everyone is wondering: Who's next?

On abusive treatment of women, Hollywood was first to fall. Revelations have disgraced many in the entertainment industry. Now a reckoning and profound cultural shift are under way in Washington, driving off age-old attitudes that made light of sexual harassment. Women were once afraid to come forward.

But no longer. "The tide is turning," said Leeann Tweeden, the former model who has accused Mr. Franken.

The irony is that the change is taking place not under Barack Obama, who was admired for his highly principled, relatively scandal-free leadership, but in the moral vacuum of the Trump presidency.

While several U.S. presidents have been hit by sexual-abuse allegations, political leaders in Canada have generally avoided such opprobrium. In the 1984 federal election campaign, then-prime minister John Turner was criticized for patting women on the posterior. Some viewed it as a lark – others more seriously. Mr. Turner said he was a tactile politician and that people should lighten up. When a reporter suggested that women found it offensive, he responded, "I don't think they find it offensive at all."

Times have changed. Were he to say something like that today, he would be roundly condemned.

Mr. Franken's funny-guy image (he was once a regular on Saturday Night Live) has been shattered. He was touted by some as a contender for the Democratic nomination, but he can kiss that ambition goodbye. He will face a Senate ethics investigation. In recent months, Mr. Bush Sr. has faced charges from a half-dozen women for unwelcome touching. Because of his age, 94, the media have gone easy on him. But because the latest charge is from his presidential years, his image will suffer.

Mr. Trump is under considerable pressure to demand that Mr. Moore withdraw from the Senate race, thereby making way for a write-in candidate. Sarah Huckabee Sanders, the President's spokesperson, ruled that out Thursday, saying Mr. Trump will leave it to the people of Alabama to decide Mr. Moore's fate.

The President would look hypocritical in speaking out against Mr. Moore or anyone accused of sexual harassment, but the issue will dog him. If he can't make a strong condemnation of Mr. Moore, particularly in light of recent allegations, who can he censure? Mr. Moore is rabidly anti-gay, anti-Muslim and not a fan of African-Americans. He was removed twice from his position as Alabama's chief justice, the second time for his unconstitutional position against same-sex marriage. The number of women who say he sought them out in their teens makes it almost impossible to believe his denials.

As for Mr. Trump, a rare moment of tension was evident this week. Typically, he is all bluster and bravado. During a speech reviewing his Asia tour, he paused to drink some water. He couldn't find the bottle for a moment, and when he did his hand was so jittery that he had to hold the bottle in both hands to drink from it.

He looked vulnerable. In dealing with the sexual-abuse turmoil consuming Washington, he has reason to be. 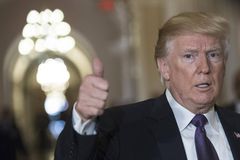 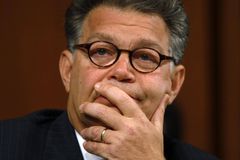 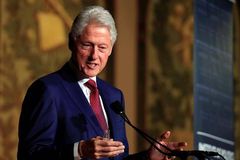