The weather has been awful in Quebec. Two weeks ago, a massive snowstorm left hundreds of people stranded on a highway overnight awaiting rescue. It was a mess. The mayor of Montreal blamed the Transport Ministry, and the Premier admitted that something had gone badly wrong.

Now another storm is raging, and this one is much worse. In a disgraceful show of spinelessness, McGill University, one of the most respected institutions in the country, effectively forced out a man who upset Quebec's political class because he wrote an opinion piece about the snowstorm that they didn't like. It would be absurd, if it weren't so awful.

Andrew Potter is a talented public intellectual who also writes opinion columns. Last year, he quit his job as editor-in-chief of the Ottawa Citizen to become director of McGill's prestigious Institute for the Study of Canada. He was good at it. Then, this week, he wrote a column about the snowstorm that was published online in Maclean's. It included a number of bilious and not very accurate comments about Quebec society. He called the traffic debacle a "mass breakdown in the social order" that was typical of the province's "essential malaise."

Within seconds, Quebec's politicians put aside their differences to unite against their common enemy – him. Premier Philippe Couillard denounced the piece, saying it was "of very poor quality" and based on "prejudices." François Legault, the head of the Coalition Avenir Québec, called it a "rag." Le Devoir published a letter comparing the column to the type of hate speech that led to the Rwandan genocide. Seriously.

It was all very tribal. About the only measured response came from La Presse's Patrick Lagacé. He reminded readers that Mr. Potter had been a highly capable editor, and had never been a Quebec-basher. He described him as "une bonne tête de journalism" who had bad day at the keyboard. In French they call it "un pet de cerveau" – a brain fart. It is a common journalistic misdemeanour.

Mr. Potter obviously realized he'd gone overboard. The day after his column was published, he posted a contrite apology on Facebook. "A political writer's first duty is to reflect his community back to itself. Quite obviously, I failed," he wrote.

The over-the-top reaction to Mr. Potter's bad day was silly. But McGill's reaction was stunning. The university basically repudiated him for expressing an unpopular opinion. "The views expressed by @JAndrewPotter in the @MacleansMag article do not represent those of #McGill," it said. It did not say who at McGill decided to issue this tweet, or why. By Thursday morning, Mr. Potter was out as head of the institute. (He'll stay on as a professor for the remainder of his term.) According to the official statement, the board had accepted his resignation, effective immediately.

Quebeckers are super-hyper-sensitive to Quebec-bashing, as we in the media know well. Maclean's faced the province's wrath before, when it published an infamous cover story calling Quebec the most corrupt province in Canada – complete with an illustration of Bonhomme, the jolly snowman, clutching a briefcase full of cash. (That was before the Charbonneau Commission, which made the piece seem prematurely accurate.)

Once upon a time the presidents of great universities were independent. They were respected for their moral leadership. Today they're functionaries, going along to get along. The current functionary at McGill is a woman named Suzanne Fortier. I do not know what kind of pressure was brought to bear on her or the other pooh-bahs at McGill by the politicians who hold the purse strings. One suspects it was ferocious. But they should be ashamed of themselves. The message they have sent the researchers and professors and students could not be more clear. We didn't stand up for him. So why should we stand up for you?

No wonder there's a chill in the air. 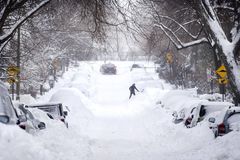