Robert Vineberg is a Senior Fellow at the Canada West Foundation. He was formerly Director General of Citizenship and Immigration Canada's Prairies and Northern Territories Region. He is also the author of the book Responding to Immigrants' Settlement Needs: The Canadian Response.

Would-be immigrants to Canada continue to face a series of bureaucratic impediments that either delay their status or reduce the effectiveness of integration once they arrive here. Fixing these problems is long overdue.

Last November, Immigration Minister Chris Alexander met with more than 400 people in Ottawa, mostly representatives of non-governmental organizations. These Service Provider Organizations contract with Citizenship and Immigration Canada (CIC) to deliver settlement services to immigrants. He told them, "You tell us what we need to get it right."

In this spirit, there are several significant weaknesses in the system that need to be addressed.

CIC must provide services to persons who are in transition from temporary to permanent status. Once these applicants receive approval in principle, only a tiny number of them are later refused. So let's treat them appropriately and give them early access to settlement services.

The same should apply to refugee claimants as soon as they are recognized as refugees by the Immigration and Refugee Board. They should not have to wait until their permanent residence papers come through several months later.

Would-be immigrants used to have to apply for immigration status from outside Canada, which often meant they would have to leave the country to do so – wasting both time and money. Now, two immigration categories, "provincial nominees" and the "Canadian experience class," allow temporary foreign workers and foreign graduates of Canadian post-secondary institutions to apply for permanent residence while remaining in Canada.

Despite these changes, the settlement program does not fund services for these people and their families until they complete the immigration process.

As a result, applicants can wait months, or even years, for the services that will help them to integrate into the work force and Canadian society. On this matter, the research is clear: Early intervention by settlement service providers makes integration easier.

It is also unfair to encourage immigrants to obtain Canadian citizenship and then tell them that they are no longer eligible for settlement services. CIC has long described the integration process as a continuum that begins before an immigrant's arrival in Canada and continues long after they obtain citizenship. So, if this is CIC's position, why does it deny so many applicants the settlement services that lead to successful integration? It just doesn't make sense to invite people to become citizens and then leave them without settlement support.

CIC also has to modernize its funding model. Service providers deliver $600-million in services annually, including orientation to Canada, language training, employment services and bridging programs to qualify to work in regulated occupations.

Many settlement service providers have been in business since the arrival of the Indochinese refugees 35 years ago. Many continuously deliver the same services, yet they receive their funding as if it were for a time-limited, one-off project. As a result, service providers often don't know if CIC funding will be forthcoming until April 1, and are forced to issue layoff notices to staff at Christmas time.

When funding is approved, service providers are paid monthly in arrears so they have to seek expensive lines of credit to cover their expenses. Do the property owners who lease millions of square feet of office space to the federal government have to wait every year to know if they will be paid? No!

Finally, most settlement service providers exist solely to deliver a government program. Yet the federal government refuses to recognize the need to provide for fixed costs beyond program-related costs. This means that service providers are constantly scrambling to make ends meet, which undermines the effectiveness of the overall system.

These defects in settlement funding are total lunacy. So let's be sensible about funding the Immigrant Settlement Program – a program that Cabinet recognized as a permanent program in 1974.

In updating the Immigrant Settlement Program, the federal government should provide services to those in transition to immigrant status, as well as to those who have become Canadian citizens if they are still in need. It must also develop a new funding model that recognizes the ongoing nature of Canada's Immigrant Settlement Program instead of treating it as something that could end tomorrow.

These changes will be 40 years late, but better late than never.

Artist photographs one Torontonian from every country in the world
April 18, 2014
Linguists struggling to preserve endangered immigrant languages
April 18, 2014 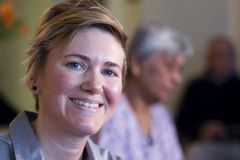