Ray Bassett is a former Irish ambassador to Canada

Irish society is beginning to wake up to the severe implications of Brexit. Important questions are being raised, including for the first time the possibility that Ireland might follow the United Kingdom out of the European Union. Such thoughts would not have been credible even a year ago.

While EU membership has greatly assisted the modernization of the Irish economy (especially the country's ability to attract U.S. foreign direct investment), the food and agriculture sector, tourism, as well as Irish SMEs (small and medium-sized enterprises) are still heavily dependent on the British market. These are employment-rich areas. The Irish Department of Finance has made pessimistic economic projections about the effect of Brexit, including 40,000 job losses, a 30-per-cent drop in Irish exports to the UK and a possible diminution of 4 per cent in Ireland's GDP.

Ireland and Britain operate a common travel area, allowing their citizens to travel to each other's country without passports; they can vote and access social supports freely in each other's jurisdictions. Both the British and Irish governments will work to hold onto this system, but it is by no means certain that the other EU countries will permit such cozy arrangements. With some European states calling for punishment of the Brits, the atmosphere is not conducive to sensible solutions.

There is also the possibility of a reinstatement of a physical border between the Republic in the south and Northern Ireland. That border had been effectively removed by the Good Friday Agreement in 1998. The reimposition of controls here could torpedo that agreement, which brought the Northern Ireland Troubles to an end. This is probably the most neuralgic point for Irish voters. Prime Minister Enda Kenny has already conceded that avoiding this will be difficult.

With so much at stake, the Irish government has kept its head down and rebuffed numerous pleas within Ireland to appoint a special minister for Brexit. This proposal has overwhelming support in opinion polls (74 per cent). The government has placed its trust in the EU to do the direct negotiations with the U.K. for the remaining 27 countries, including Ireland. There is widespread skepticism within the country that the same authorities, which inflicted a notorious bailout on Ireland, are now going to place the country at the forefront of their considerations.

As the implications of the forthcoming rupture between the U.K. and the EU becomes clearer, Irish public opinion has started to shift. In a recent poll in Ireland's leading business paper, the Sunday Business Post, 56 per cent of those polled believed that links with the U.K. are more important than with the rest of the EU. Support for an "Irexit" in the event of a hard Brexit was 28 per cent, but this would have barely registered any support a year ago.

Questions are being asked as to whether it is not more disruptive to break with Britain and Northern Ireland than with the remaining 26. Certainly, from a cultural, historical and family-ties point of view, Ireland and the U.K. are the closest of any two EU countries. Without the U.K., Ireland will be left with no natural allies inside the EU. It will be an island off the west coast of Europe, behind another larger island which is not part of the EU.

Given that it is so overwhelmingly in Ireland's interest to negotiate directly with Britain on Brexit, the obvious question must be asked as to why the Irish authorities are pursuing the current course. The answer lies in the way the European Union has worked with the political and bureaucratic elites there over the years. Constant meetings in Brussels involving ministers and officials have left them much more Eurocentric than the population at large.

They also need to be much more aware of the wider international environment. The U.K. is energetically seeking new trade agreements, and the prospect of an anglophone North Atlantic free-trade area, encompassing the U.S., Canada and Britain, is emerging as a strong possibility.

Given Ireland's geographic position, its trade links and its ethnic connections with these three countries, it would be very foolish of any Irish government not to have a Plan B in its sights should the Brexit discussions end in acrimony. However, this would require a much more independent line than the present course. 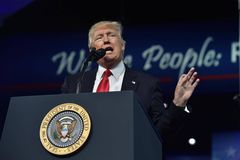 Globe editorial: The British Speaker needs to stop speaking
February 7, 2017
Opinion
When voters feel the world is broken, the Trumps rise
February 11, 2017
Follow us on Twitter @globedebate Opens in a new window
Report an error
Due to technical reasons, we have temporarily removed commenting from our articles. We hope to have this fixed soon. Thank you for your patience. If you are looking to give feedback on our new site, please send it along to feedback@globeandmail.com. If you want to write a letter to the editor, please forward to letters@globeandmail.com.
Comments