The head of the Kenyan counter-terrorism unit that abducted me and a colleague, and held us incommunicado for a day last August, tried to apologize. We had been working as advisers to Raila Odinga, Kenya's opposition leader. "Forgive us," he said, motioning to his group of guards. "We're a young country." We told him no. Kenya could do better.

You might question our optimism now, in the aftermath of Thursday's sham presidential election. Violent protests, poll workers threatened, judges attacked, brutal policing – these are the signs of a country on the brink, not on the move. Sara Hradecky, Canada's High Commissioner in Nairobi, was right to express "profound sadness" in the face of Kenya's political conflicts.

Kenya is so much better than the spectacle of the last few days. Its future should be bright. Nairobi is a vibrant city and an essential economic, financial and transportation hub for East and Central Africa. Kenya's market economy and free press are impressive when set against the dictatorships and failed states on its borders. Its entrepreneurs have created the world's leading system of mobile money. And if you think Canadians are educated and politically astute, try sitting in traffic with a Kenyan Uber driver.

At the moment, however, Kenya and its government are heading down a dark and regressive path. Sanctioned by its Supreme Court in September for "irregularities and illegalities" and ordered to re-run the vote, Kenya's election commission, with the same discredited leadership, rushed into a second election process that was indistinguishable from the first. President Uhuru Kenyatta called the judges "crooks" and promised to "fix" them. One commissioner fled to the United States, fearing for her safety. Even the electoral chairman acknowledged this week that he could not guarantee "credible" elections. It is no wonder that Mr. Odinga refused to participate.

Kenya is at war with itself, but not in the sense that many people imagine, a never-ending struggle among tribes, candidates or political parties. Kenya's internal conflict is instead between its better self, the liberal, open, law-abiding country so often apparent, and a more retrograde, corrupted version.

It is time for Canada and our allies to choose which Kenya we support.

Supporting a democratic Kenya will mean telling Mr. Kenyatta some painful truths: that his legitimacy depends upon a mandate from the Kenyan people that he has not yet won; that Kenya's democratic future is more important than one man or political party. In practice, this will mean wholescale reform of the election administration – new people and procedures that can earn the confidence of all Kenyans – and, yes, a new election. If the price is a few months of instability or financial uncertainty, it's a price worth paying. We can't ask Kenyans to accept a phony process we would never accept for ourselves.

None of this means we would try to tell Kenyans who should lead them. Western officials have offered repeated assurances that they have no preferred candidate. That is no surprise. Mr. Odinga is often tarred by his opponents as a radical. But, except for a promise to re-orient the government to serve the needs of the poor, he represents continuity more than rupture. Both contestants have said they will accept the results of a fair election.

In pushing for a new, genuinely democratic election, we would be making a longer-term investment in the Kenyan people, and indeed, in democrats and reformers across Africa. They are watching what we do now. Chief Justice David Maraga was lauded as a hero for overseeing the first court in Africa to overturn the election of an incumbent president. A few days ago he was reduced to sitting on the bench, alone, the Court unable to hear a pivotal case. Most other judges decided to stay away after the bodyguard of one was shot on a public street.

One of those talkative Uber drivers told me that, although he was from the President's Kikuyu tribe, he was planning to vote for Mr. Odinga, simply because he wanted his children to grow up in a country where presidents never forget that they could lose the next election. It's time that we matched his same courage and wisdom. 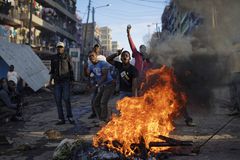