Peter Singer is professor of bioethics at Princeton University and Laureate Professor at the University of Melbourne.

If you used the term "business ethics" in the 1970s, when the field was just starting to develop, a common response was: "Isn't that an oxymoron?" That quip would often be followed by a recitation of Milton Friedman's famous dictum that corporate executives' only social responsibility is to make as much money for shareholders as is legally possible.

Over the next 40 years, however, business people stopped quoting Mr. Friedman and began to talk of their responsibilities to their companies' stakeholders, a group that includes not only shareholders, but also customers, employees and members of the communities in which they operate.

In 2009, an oath circulated among the first class of Harvard Business School to graduate after the global financial crisis. Those who took it – admittedly, a minority – swore to pursue their work "in an ethical manner" and to run their enterprises "in good faith, guarding against decisions and behaviour that advance my own narrow ambitions but harm the enterprise and the societies it serves."

Since then, the idea has spread, with students from more than 250 business schools taking a similar oath. This year, all Dutch bankers, 90,000 of them, are swearing that they will act with integrity, put the interests of customers ahead of others (including shareholders), and behave openly, transparently and in accordance with their responsibilities to society. Australia has a voluntary Banking and Finance Oath, which obliges those taking it (more than 300 people have so far) to, among other things, speak out against wrongdoing and encourage others to do the same.

In August, one executive, Véronique Laury, said her professional ambition is to have "a positive impact in the wider world." You might think she heads a charity, rather than Kingfisher, a British home-improvement retailer with some 1,200 stores across Europe and Asia.

In September, McDonald's Corp., the largest purchaser of eggs in the United States, showed that it, too, can contribute to ethical progress, by announcing that its U.S. and Canadian operations would phase out the use of eggs from caged hens. According to Paul Shapiro, the U.S. Humane Society's vice-president for farm animal protection, the move signals the beginning of the end for the cruel battery cages that have, until now, dominated the U.S. egg industry.

Then came the revelations that Volkswagen installed software on 11 million diesel cars that reduced emissions of nitrogen oxides only when the cars were undergoing emissions tests, enabling them to pass, even though in normal use their emissions levels greatly exceeded permitted levels.

In the wake of the ensuing scandal, The New York Times invited experts to comment on whether "the pervasiveness of cheating" has made moral behaviour passé. The newspaper published their responses under the heading: "Is Honesty for Suckers?"

Cynics would say that nothing has changed in the past 40 years, and nothing will change, because in business, all talk of ethics is intended only to camouflage the ultimate aim: profit maximization. Yet, Volkswagen's cheating is odd, because, even – or especially – by the standard of profit maximization, it was an extraordinarily reckless gamble. Anyone at Volkswagen who knew what the software was doing should have been able to predict the company was likely to lose.

Indeed, all that was required to lose the bet was an attempt to confirm the emissions results obtained when the vehicles were undergoing U.S. government emissions tests were similar to those resulting from normal driving. In 2014, the International Council on Clean Transportation commissioned West Virginia University's Center for Alternative Fuels, Engines and Emissions to do just that. The software ruse quickly unravelled.

Volkswagen's stock has lost more than one-third of its value since the scandal broke. The company will have to recall 11 million cars, and the fines it will have to pay in the United States alone could go as high as $18-billion (U.S.). Most costly of all, perhaps, will be the damage to the company's reputation.

The market is giving its own answer to the question, "Is honesty for suckers?" Its response is: "No, honesty is for those who want to maximize value over the long term." Of course, some companies will get away with cheating. But the risk is always there that they will be caught. And often – especially for corporations of which their brands' reputation is a major asset – the risk just isn't worth taking.

Honesty maximizes value over the long term, even if by "value" we mean only the monetary return to shareholders. It is even more obviously true if value includes the sense of satisfaction that all those involved take from their work.

So we have grounds to hope that as the millennials begin to outnumber those still running Volkswagen and other major companies, ethics will become more firmly established as an essential component of maximizing the kinds of value that really matter. At least among major corporations, scandals such as the one at Volkswagen would then become increasingly rare. 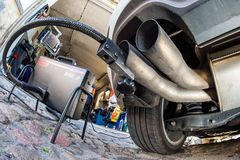