A tale of two provinces unfolded this week: Albertans were told how wonderful their province's future will be, Ontarians how difficult theirs will be.

Alberta, if the Conservatives' budget can be believed, is rolling in dough. Government spending increased everywhere. Restraint was a word banished from the province's vocabulary; spending will be up by almost 10 per cent in the next two years.

The Sustainability Fund was raided again: $1-billion over the past two fiscal years to help reduce the deficit. A budget surplus is forecast of almost $1-billion in 2013-2014, and more than $5-billion in 2014-2015. Amidst this cornucopia of spending and revenue, the Heritage Fund got a puny increase, further evidence of the province's refusal to save for the future.

The munificence is built on only one product: non-renewable resource revenues. This year, about 25 per cent of government revenues will come from this source; in two years, if the budget forecasts are correct, the share will be about 30 per cent. By far the biggest revenue source among the non-renewables: the oil sands (or tar sands, if you wish). Royalties from bitumen in two years will raise almost $10-billion, just a shade below revenue from personal income taxes.

So when Alberta touts its low personal and corporate tax rates, and the lack of a sales tax – the Alberta Advantage – there's only one reason: bitumen royalties, followed far behind by royalties from crude oil and natural gas, and sales of Crown land for exploration. No wonder it's the abiding purpose of the Alberta government to do nothing that the oil industry doesn't want, a position echoed by the Harper government in Ottawa.

Alberta's good fortune and bright future contrasted with the scenarios for Ontario painted by economist Don Drummond and his fellow commissioners. Whereas Alberta's budgets balloon courtesy of bitumen royalties, Mr. Drummond warned Ontarians that "we cannot count on robust economic growth to resolve our fiscal challenge." Alberta thinks its economy might grow at 4 per cent a year; Mr. Drummond forecasts Ontario might grow at half that rate.

Alberta's government will get bigger in spending and personnel; Mr. Drummond said Ontario's must shrink. Alberta is heading for big surpluses, Ontario for large deficits – $30-billion in 2017-2018, Mr. Drummond reckons, if nothing is done. Alberta has no provincial debt; Ontario's debt has reached a ratio of 35 per cent of the provincial economy and is going higher. Alberta has the highest bond rating; Moody's Investor Service just knocked down Ontario's from stable to negative.

Alberta's spending per capita on government will go up; Ontario's must decline an average 2.5 per cent a year for seven years – "a drop that is almost certainly unprecedented," Mr. Drummond wrote.

Of course, no Ontario government will be that draconian, certainly not a minority Liberal government that has presided over years of big spending increases. Instead, Ontario will be raising more revenues from higher fees and taxes, thus widening the tax gap with Alberta.

Alberta, courtesy of its booming economy, is attracting a greater share of skilled immigrants; Ontario is getting a higher share of family-class immigrants and refugees, meaning it'll take much longer to reach average Canadian wages.

Of course, Alberta pays into the country's equalization scheme, as Ontario did for decades. Now, Ontario receives equalization payments. The way the system works, however, means Ontario gets a small amount from Ottawa, but Ontario taxpayers are actually sending more money to Ottawa than their government gets back in payments.

The drift of people and money to Alberta has been going on since the 1970s, but, for much of that period, Ontario held its own. With Alberta, it was the paymaster of equalization and, together, they were the country's two golden geese.

All this changed in the past decade. Apart from a couple of drops in the price of oil, Alberta has boomed, whereas the hollowing out of manufacturing has stunted Ontario's prospects. Alberta will see big government spending with low tax rates; Ontario will face government spending but higher tax rates. 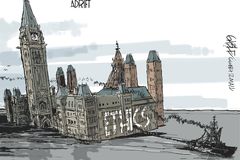