Since taking over in September, Jim Prentice has generally made the job of running Alberta look easy. Suddenly, however, the skies over his province have grown dark and ominous and there are few who envy the choices confronting the new Premier.

When oil revenues account for 21 per cent of your incoming revenue, a precipitous drop in the selling price is going to shake the foundation of a provincial economy. And so, as the cost of a barrel of crude has plunged in recent weeks, the reverberations have been felt most acutely in Canada's oil capital.

Mr. Prentice is talking about the hard conversation the government is going to have to have with the Alberta public. He's warning about grim consequences that will be felt by everyone. It was only a couple of weeks ago that his finance minister was painting a relatively rosy picture of the state of the treasury. Now, it sounds like all hell is about to break loose.

The math is inexorable. Every $1 (U.S.) drop in the price of a barrel of oil costs Alberta $215-million. The province's current provincial budget originally forecast oil at $98 a barrel. That price has fallen as low as $60 recently, and there is no one predicting it to return to traditional levels any time soon. Morgan Stanley has outlined a scenario where the price falls as low as $43 a barrel by the second quarter of next year.

Regardless, we're talking about a situation that will cost the Alberta treasury billions of dollars.

The predicament the province finds itself in is exacerbated by other realities. It could cost as much as $30-billion over the next five years to address the infrastructure shortfall that exists, the Premier told me recently. There are not enough schools and hospitals to handle the influx of immigrants arriving annually from across Canada and around the world, including thousands of school-aged children. Only a couple of months ago, Mr. Prentice promised that construction would soon start on a dozen new schools.

That pledge may have to be revisited – as may others.

Mr. Prentice has promised to continue balancing the budget, which, in the face of rapidly declining oil revenues, leaves him with a couple of options: massive spending cuts and/or tax increases.

Alberta could largely address its dilemma with one fairly simple move: the introduction of a consumer tax. It remains the only province in the country without one, an achievement that forms the basis of what is known as the Alberta Advantage – the economic benefit derived from having the lowest taxes in the country.

Besides having no sales tax, the province has just a 10-per-cent flat tax on income – something that certainly makes the rich extremely happy.

Economists have been saying for years that Alberta's tax regime is unsustainable. And some of the more notable economic thinkers, such as the University of Calgary's Jack Mintz, have long argued for a harmonized sales tax (with the federal GST). The provincial government won't hear of it, of course, because it believes introducing a sales tax would be its political death knell. It's the sacred cow that will never be slain.

By his calculations, Mr. Mintz estimates that for every percentage point of a new provincial sales tax, the treasury would get an injection of $1-billion. A 1-per-cent increase in the flat tax would add nearly $300-million to the government's coffers.

So the options are there for Mr. Prentice if he's looking for a quick and effective way to address Alberta's shortfall. If he decides to try and solve his problem through massive spending cuts, I wish him well. People won't be any less angry about that.

If the priority is keeping the tax structure the way it is now, then the Premier is not going to get a lot of sympathy from me or anyone else elsewhere in Canada. When you need high oil prices to fund your operating costs, then your fiscal structure is malfunctioning. And that's something Alberta is going to have to do something about sooner or later.

Alberta car dealers still on a roll despite drop in oil prices
December 11, 2014 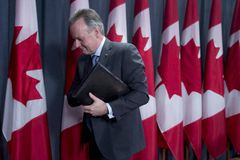