There are more than 25,000 elected municipal officials in Canada, compared to 757 elected provincial and territorial officials and 308 elected federal officials.

Large urban municipalities such as Toronto, Montreal, and Calgary have larger populations than six of the provinces. And yet, in several important ways, the development and needs of municipal governments receive much less academic, media and public attention than deserved.

Most of Canada's public-policy think tanks and political science departments are far more focused on federal, provincial and international issues than municipal issues. Municipal government is most often seen as the "third" level of government rather than as the first level, closest to the people. It is becoming increasingly difficult to persuade qualified citizens to run for municipal office and to create truly competitive races at the municipal level. And municipal government structures and practices – usually defined by provincial statutes – have generally failed to keep pace with the country's urbanization.

Political and administrative weakness at the municipal level has contributed to corruption in Montreal, reputational damage to Toronto and chronically low voter turnouts in municipal elections all over the country.

So what can be done to strengthen municipal politics and governance in Canada?

First, think tanks and academic institutions engaged in generating intellectual capital for participants in our democratic processes should devote more of their resources to the municipal level. For example, prior to the last municipal elections in Calgary, our Manning Foundation for Democratic Education conducted a large, city-wide public opinion survey identifying municipal issues of most importance to Calgarians. These turned out to be traffic congestion, cost of living, accountability, and crime at Calgary's C-train stations. We then produced 10 policy papers on these and related issues, all of which were put in the public domain for any candidate to view, use or criticize.

Of particular interest and use to voters was a tracking system developed by researchers David Seymour and Jeromy Farkas for tracking City Council performance on everything from councillor attendance, to time spent on particular subjects, to votes and voting patterns on key issues. Their system is described in a paper titled The Democratic Tool Box and has application to tracking the performance, for accountability purposes, of any municipal council where there is relatively free voting.

Second, in most major cities where it does not yet exist, we are probably moving toward a "municipal party system." But the transition process needs to be very carefully thought through if it is to be accepted as a positive development.

In Calgary, where most candidates present themselves as "independents," our polling showed strong opposition to the municipal involvement of federal or provincial parties, as well as opposition to independent municipal parties or even "slates" run by interest groups.

At the same time, our analysis of voting patterns on Calgary City Council – who votes with whom on what issues – showed the existence of clearly identifiable coalitions of councillors who increasingly vote together on particular issues and who therefore constitute "shadow slates" or "shadow parties" that eventually may coalesce in a more concrete form.

It is these shadow slates and coalitions that could transition into loosely organized "municipal parties" in the future. But this transition will be a positive development only if we address head-on the general public antipathy to political parties – the highly prevalent view that political parties are self-centred, ideologically or emotionally blind to positions other than their own, authoritarian rather than democratic, adversarial rather than co-operative and prone to unethical conduct.

On the optimistic side, however, the evolution of new municipal parties may provide a once-in-a-lifetime opportunity to reinvent "the political party" – to create new forms of political organization less prone to the deficiencies of the past and better suited to practising the democratic politics of the future.

In undertaking such a venture, it's worth remembering that democracy itself was an invention of the city-state politics of ancient Greece. It should not surprise us therefore if its reformation for the 21st century in a form more capable of inspiring citizen support should occur at the municipal level.

Preston Manning is founder of the Manning Centre for Building Democracy.

Opinion
As a populist, Harper is no Chrétien
November 5, 2013 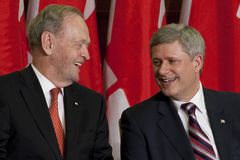 Opinion
A fast-food lesson: Voting should be by residency, not citizenship
November 2, 2013