In November of 1986, the Arizona Republican Party held an election night celebration at a Phoenix hotel to toast its victorious candidates. The marquee attraction was a two-term congressman named John McCain, who won the Senate seat vacated by GOP icon Barry Goldwater.

Mr. McCain delivered a rousing speech and then retired to his suite at the hotel, where he watched a replay of the address on television. But someone had failed to erect the speaking platform high enough for the 5-foot-9 senator, so only part of his face was visible on TV.

That unfortunate someone was Robert Wexler, the 20-something head of Arizona's Young Republicans and the chief choreographer of the evening's events. A livid McCain went back downstairs to look for Mr. Wexler, confronting him in the hotel ballroom.

"I told you we needed a stage," Mr. McCain screamed at the young man, jabbing a finger in Mr. Wexler's chest. "You incompetent little [expletive] When I tell you to do something, you do it."

John McCain's biography is full of episodes like this. As far back as high school, peers nicknamed him "McNasty." He's been known to fling f-bombs at fellow lawmakers when he doesn't get his way. And in a 2006 poll, Capitol Hill staffers ranked him as the Senator with the "second hottest temper," after Alaska's Ted Stevens.

Should we care? I think we should. The most important measure of a human being is the way he or she treats other people, especially those under his or her power. By many accounts, Mr. McCain degrades and demeans them. And there's no excuse for it.

He's not the only one, of course. In Congress, abusive behaviour toward underlings is eminently bipartisan. Remember Cynthia McKinney, the ultra-liberal Georgia representative who allegedly struck a Capitol police officer when he tried to stop her at a security checkpoint?

Ms. McKinney eventually got voted out of office, but most of Congress's bullies are still going strong. Consider four-term representative Anthony Weiner, a rising Democratic star and a leading candidate to replace Michael Bloomberg next year as mayor of New York. When staffers don't measure up to his standards, Mr. Weiner reportedly throws telephones and kicks furniture.

No wonder Mr. Weiner has experienced more office turnover than any other representative in his state's delegation. Since early 2007 alone, Weiner has had three different chiefs of staff. Roughly half of his 20-odd employees have served for less than a year.

We've all met people like Anthony Weiner; some of us have worked for people like them, too. You don't want a boss who degrades, harangues and humiliates you. So why would you vote for one?

Here you might reply that public officials are elected to, well, serve the public. So if their arrogant and domineering style gets staffers to work harder, it's good for all of us.

Let's leave aside the question of whether this style actually produces better results. Even if it did - and I have my doubts - it would still be wrong. Our lawmakers do more than simply make laws; they're supposed to represent us, in every sense of the word. By electing officials who demean employees, we also demean ourselves.

How much does personal virtue matter in a public office? During the impeachment of U.S. president Bill Clinton, some of my liberal friends told me that it didn't matter at all. The president's extramarital affairs bore no relation to his public duties, so the public should just butt out.

Really? Let's suppose, then, that a president struck his wife instead of simply cheating on her. Would one still deem his personal behaviour irrelevant?

I don't think one would. And that's because our leaders - more than anybody else - serve as symbols of all of us; they embody our deepest beliefs, values and principles. We would never elect people who did physical harm to those under their charge. But we continue to elect verbal and emotional bullies, who can do just as much damage.

And that brings us back to John McCain. During the 2000 GOP primaries, operatives for George W. Bush whispered that Mr. McCain's notorious temper made him a dangerous choice for president: After all, no one wants a madman with his finger on the nuclear button.

That's absurd. There is no reason to question Mr. McCain's good judgment, which he has honed over many years of public service. But there is every reason to question his behaviour, especially toward subordinates, which speaks badly of his basic values - and of the voters'. If Americans don't want bullies in their schools and workplaces, then they shouldn't vote to put one in the White House.

Opinion
The spy who came in from the PTA meeting
July 6, 2010 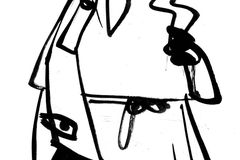