Last week was a tipping point for the United States. After the racial massacre in Charleston, people hauled down the Confederate battle flag across the South. Then, on Friday, the Supreme Court legalized same-sex marriage in all 50 states. "Love wins," tweeted Barack Obama. The White House lit up in the colours of the rainbow flag.

"I think it's a transformational moment," said Lindsey Graham, the Republican senator from South Carolina. He happened to be speaking about gay marriage, but he could just as easily have meant the Confederate flag. Public support for tearing down the flag was both bipartisan and vocal. And now, even social conservatives are conceding that the battle against same-sex marriage is over. Plenty of Republican politicians realize they would do best to surrender gracefully. Presidential candidate Jeb Bush (who once described same-sex relationships as "sodomy") now says people should "show respect" for same-sex couples, and should accept the Supreme Court ruling.

On social issues, American public opinion has galloped ahead of conservative political rhetoric. A recent Gallup poll shows just how mainstream liberal values have become. Sixty-three per cent of Americans now believe same-sex relationships are morally acceptable – a jump of 23 percentage points since 2001. Almost the same number – 61 per cent – think that having a baby outside marriage is okay, too. (In 2001, it was 45 per cent.) Even the abortion wars have cooled down. Forty-five per cent still oppose abortion, but a lot of them don't want to fight about it any more.

What's happened? Americans have been turning more Canadian. Put another way, they've been catching up with the rest of the developed democracies, where the values of individual autonomy and expressiveness have swamped the old notions of tradition, patriarchy and social order. Today, even Christian evangelicals are struggling to come to terms with marriage equality. When Bruce Jenner came out as a woman, most people responded with mild curiosity and a collective shrug. As one person put it, "I don't get it, but whatever."

The shift on marriage rights has been perhaps the swiftest social change in history. Back in 1989, the year Andrew Sullivan wrote his hugely influential essay in favour of gay marriage, it was a radical idea. The lone poll that asked Americans about gay marriage found that only 12 per cent supported it, according to the pollster Nate Silver. That's lower than the support for legalized polygamy today. In 2008, neither Barack Obama nor Hillary Clinton endorsed gay marriage. But by 2014, more than seven in 10 people living in developed countries said they supported some sort of legal recognition of same-sex couples.

Surprising as it may have seemed, the Supreme Court ruling didn't break new ground. It simply affirmed the voice of American public opinion. As Mr. Silver points out, the rising support for marriage equality wasn't simply a generational matter. What happened was that society changed its mind. People came to believe that sexual orientation wasn't a matter of choice. Therefore, gay couples shouldn't be excluded from our central social institution or from the happiness and other benefits it confers. As Justice Anthony Kennedy so poignantly wrote, "Marriage responds to the universal fear that a lonely person might call out only to find no one there."

Paradoxically – as The New York Times's Ross Douthat has observed – straight people are giving up on marriage just as gay people are embracing it. In other news last week, the still-unwed Bristol Palin (remember her?) announced that she's pregnant with her second child and she doesn't want anybody lecturing her about it. Judging by the widening acceptance of out-of-wedlock childbearing, she's pretty safe.

The pendulum has swung toward tolerance on other issues, too. Support for marijuana-law reform is spreading fast. There is also bipartisan agreement that U.S. incarceration rates are disastrously high and need to be radically reduced. Among the few reactionary stereotypes with any remaining basis in reality is Americans' infatuation with guns – which is really all of a piece with Americans' embrace of liberty, individuality and freedom.

As the Confederate battle flag disappears and the rainbow flag flies proud, the redneck nation we thought we knew so well has changed beyond recognition. The culture wars are all but over, and the liberals won. Which poses an existential question for Canadians: Without the Americans to kick around, who are we going to look down our noses at? 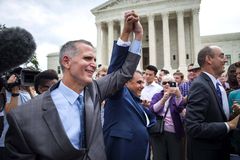 Opinion
Gay marriage another step on the U.S. road to social justice
June 26, 2015