Mary Simon is a former Canadian ambassador for circumpolar affairs and represented Canada on the Arctic Council.

As the two leaders acknowledged, our shared Arctic rests on the territories of indigenous peoples who possess a wealth of knowledge and cultural diversity. From Nunatsiavut (northern Labrador) in the East to the Bering Sea in the West, 52 Inuit communities in Canada and many more in Alaska are built directly on the shore of the Arctic Ocean. These same communities are on the front lines of climate change and are ready to apply their knowledge, inventiveness and adaptability. But we need help.

Canada and the United States, through the Arctic Council, have already done much in terms of study and advancing scientific research on the impact of climate change in polar regions, and we have worked well with the other six states of the Arctic Council.

Speaking as an Inuk and as a Canadian, our government should be seen as a global leader in resolving the challenges of climate change. We need strategic investments that put Canada at the forefront of learning from what is already happening in dramatic fashion in our Arctic communities. We have a unique opportunity to become known for our investments in technologies to adapt to the changing conditions, to gather knowledge and monitoring data from the Inuit in the communities hardest hit by climate change and to be the hub for international scientific and traditional Inuit knowledge to understand the extreme changes that are occurring.

Along the way, we need to secure the basis of our relationship with and use of the land, ice and ocean that produce our traditional food. The government's pledge to protect 10 per cent of our Arctic Ocean by 2020 is an opportunity to protect the special places we live near and travel to that are biologically productive and culturally significant. Based on traditional knowledge built up over the generations, Inuit have identified for government researchers many ecologically significant areas such as Lancaster Sound in Nunavut, Prince Albert Sound in the Northwest Territories and the Torngat fjords in Labrador, as well as other Inuit regions.

These areas should be at the top of the government's list for protection. The best way to ensure this happens is to create a place for Inuit leaders during the selection of candidate areas – instead of asking our opinion afterwards. Together, we can define the most important ocean places and policies to safeguard our Arctic home and our future.

There needs to be a balance struck between sustained economic growth and climate change mitigation and adaptation measures. Inuit can help achieve this balance by being included in discussions about where and how Arctic shipping, offshore oil and gas exploration and commercial fishing should proceed. Arctic-specific standards are still needed in many cases and should be built on the best available science and our traditional knowledge of what works in the Arctic.

We already face daunting challenges that include education, housing and health in the North. This week, Mr. Obama and Mr. Trudeau recognized that success in responding to climate change in the Arctic means that our communities and people continue not just to survive, but to thrive. Wonderful words. Now let's put them into action. 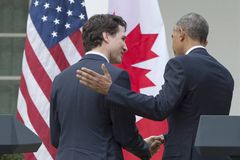