After the Syrian revolution erupted in 2011, having begun as a sectarian revolt, Western countries stood on the sidelines.

As the revolution became bloodier, more factionalized and religious, and attracted money and fighters from other countries in the region, the call went up in certain Western circles for sending arms to certain groups.

At international meetings, Prime Minister Stephen Harper was hesitant, according to officials familiar with the deliberations. How do we tell friend from foe in such chaos, he asked? How could we be sure that weapons sent to one group might not fall into the hands of another?

From that skepticism about sending weapons, the Prime Minister has shifted to wanting Canada to be a combatant in Syria, just as it is in Iraq. On Monday, the Conservative majority pushed through the Commons a resolution authorizing war in Syria. The reason for the shift is the arrival of the Islamic State, and its control of swaths of territory in both Iraq and Syria.

Having insisted that Canada would contain its military engagement to Iraq, the Prime Minister followed the inescapable logic of initial commitment. If the strategic objective of the military mission is the degrading and destruction of the Islamic State, then it cannot be achieved in Iraq alone.

Suppose the objective of eliminating IS in Iraq and Syria were somehow to be achieved, what would be left in Syria? To guess at that unanswerable question, we have to know what is there now and who would benefit from the vacuum created by the movement's defeat.

Myriad groups are fighting in Syria, some very small, others quite large. Although the government is run by President Bashar al-Assad, he is more figurehead than operational leader. Intelligence reports suggest that his regime is more horizontal than vertical, with constellations of individuals within the system who have raised troops, control portions of territory and money, make their own decisions and act as warlords.

If Mr. Assad were to be removed, who knows which warlord or warlords would emerge as Syria's kingpin? A fight within the regime for power, territory and money would ensue, with the Alawite minority, which has run the country under Mr. Assad and his late father, fighting to maintain its grip or to defend itself from slaughter by Sunni militants.

So there is a nasty, dysfunctional, decentralized Syrian government. Then there is a multiplicity of religiously inspired groups, the largest of which is the al-Nusra Front, which is linked to the Islamic Front that has ties with al-Qaeda. These groups, in turn, either work with or fight against other extremist Salafist groups, some of which are financed by Saudi Arabia, others by Gulf states such as Qatar, and still others by Iran, which also supports the Assad regime.

The Islamic State, the target of Canadian and U.S. bombs, is also the target of some of these other militant groups in Syria that resent its presence, contest its religious theories and disagree with its strategy of forming a caliphate that disregards existing state boundaries.

It is also a target for the Assad regime, since an IS victory would by definition mean the end of Syria as the Assad regime (and everybody else) knows it. Anything done to weaken the movement, including by Canadian and U.S. bombs, directly and indirectly helps the Assad regime, which both Canada and the U.S. have declared must go.

The enemy (Assad) of our enemy (IS), while not being our friend, is not really therefore an enemy after all, in a situation where every realistic political option is bad, at least by our standards.

Which is another way of saying that an IS defeat in Syria would lead to territorial and political vacuums that other groups engaged in the Syrian conflicts – and we should use the plural of the word since there are many conflicts – would rush to fill.

There is, of course, an option: that somehow, however improbably, the Free Syrian Army, now divided and militarily enfeebled, could somehow be reconstituted, re-equipped, retrained and reinvigorated to become an effective military force to fight simultaneously and victoriously against the Assad regime, Syria's many Islamic factions and the Islamic State.

This option hovers between hope and fantasy for a country ripped apart, desperately poor, profoundly corrupt, and riven by religious and ethnic factions that will defy easy stitching together again – even if the Islamic State were defeated. 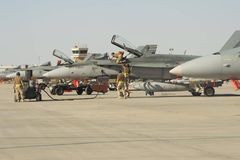 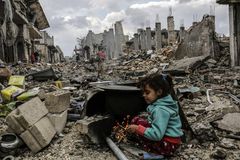