In the north end of High Park in Toronto, not far from the traffic of Bloor Street, there’s a dark-timbered pavilion among the oaks and maples. It’s noticeably cooler there among the trees on a blazing summer day and the partly enclosed space provides a curious sensation of being both inside and outside.

Though the High Park Nature Centre now gives shelter to bird sketching workshops, summer camps and yoga classes, the structure was built in 1932 to accommodate the High Park Forest School, which held its very first class in 1914. The school was part of a larger movement where chalkboards and desks were set up in meadows and forests and classroom windows were kept open even in winter.

Open-air learning, once used as a way to combat the spread of tuberculosis in the early 20th century, is worth turning to again amid the coronavirus crisis. There is no reason that our leaders can’t be as forward-looking as health and education officials were more than 100 years ago, and use outdoor education to safely reopen schools.

In the late 19th century, tuberculosis was a major killer and medical experts believed fresh air had curative powers. The ill recuperated in sanatoriums set in forests and mountains, spending the bulk of their day in the open air.

Open-air schools were designed to provide children with access to fresh air, though designs varied widely, from rooms with massive windows open in all weather, to spring-to-fall forest schools that were quite literally among the trees. Or the classroom might exist somewhere between outside and in – a partly sheltered space atop a roof, for instance, or an open-sided structure without walls.

The first forest school opened outside of Berlin in 1904. Architects in France designed school pavilions with glass folding doors and radiant heating in the floors. Kids bundled up with their books in Chicago, Rhode Island and New York. There were more than 150 open-air schools in Britain and Scotland before the start of the Second World War.

The Toronto Board of Education opened the Victoria Park Forest School in 1912 in Scarborough and the High Park school a couple of summers later. Tents and pavilions were the only shelter from rain, wind and cold. The forest schools ran from May to late October, but some regular schools, such as downtown’s Orde Street School, were equipped with rooftop classes and heavy winter coats with hoods for year-round learning. In the 1910s and 1920s, newspapers carried calls for tenders to revamp current schools to allow for more open-air possibilities. Open-air schools ran for decades with the longest holdout, the High Park Forest School, closing in 1964.

Public health officials typically selected candidates for outdoor learning during school checkups in September, though the programs also took referrals from family doctors. The children were often underweight, anemic and suffered from respiratory issues that officials worried could eventually lead to tuberculosis. Open-air learning tended to be deeply regimented. Learning and play were wedged around hot meals, toothbrush drills, “sun baths” and afternoon rest periods, where naps under trees or by windows could last as long as two hours. Students were weighed regularly.

Early 20th century open-air learning was driven by immediate health concerns, but it was also seen as a way of boosting long-term prosperity. In his how-to guide, education advocate Hugh Broughton described the response of London officials after opening four outdoor schools in 1907 and 1908: “From the beginning the Board of Education has been very sympathetic … and approval has been shown by increased grants. Nor is this to be wondered at, for at length governments are beginning to see that the basis of commercial prosperity is a healthy people.”

Over this past summer, large numbers of parents have called for bolder moves from their provincial governments, such as reducing class sizes, to protect children and their families from the virus. They’ve also been calling for outdoor learning, which makes sense given that one of the few things we know for sure about the virus is that it is harder to transmit outdoors.

Many schools across the country are already struggling with infrastructure issues such as windowless rooms and broken ventilation systems. In a recent Quebec report, 54 per cent of schools in the province were classified as in “poor condition.” Ontario is currently grappling with a $16.3-billion school repair backlog. Couldn’t students be safe – and perhaps more comfortable – if provinces took outdoor schooling more seriously?

Nazeem Muhajarine, professor and chair of community health and epidemiology at the University of Saskatchewan, points to the fact that many First Nations-run schools already hold classes outdoors with a focus on land-based education. Amid milder weather, “moving classrooms outdoors in a practical sense is a safer alternative to crowded classrooms during this pandemic,” he said. “There is opportunity to physically distance, have plenty of fresh air circulation, and if this option is combined with mask wearing and observing good hand-hygiene, the risk exposure to the virus can be greatly minimized.”

Schools have started experimenting with outdoor learning in the United States and Europe. In San Mateo County, Calif., school boards are working with volunteer landscape architects to find nearby spots for outdoor classrooms.

Efforts aren’t limited to warm climates. Denmark’s reopening of schools in April has been called a success. Photos show sparse rooms with children sitting far apart or in public parks closed for their use.

In Vermont, the White River Valley Middle School is planning to teach students in tents outside the school two days a week with at-home learning making up the rest of the week until November. New York’s mayor, faced with growing pressure from parents and officials, is now encouraging principals to work with the Department of Education to use schoolyards, public parks and school streets for classes.

There have been scattershot examples of Canadian school boards encouraging teachers to take classes outside. The City of Toronto is offering schools the use of park spaces without permits and the Toronto District School Board has created a map listing parks within 100 metres of every school, according to David Hawker-Budlovsky, who runs the school board’s outdoor education programs.

Indigenous educators are hoping to see more learning on the land as well. And the Upper Grand District School Board, Muskoka and Orillia school boards in Ontario as well as the North Vancouver school boards are all promoting more outdoor time as aspects of their reopening plans.

Though most provinces reference outdoor learning in their back-to-school plans, actual ideas on how this might work tend to be vague. Doug Ford, the Premier of Ontario, has signalled he is open to the idea, but his government has largely passed off the specifics of the reopening plans to school boards. Nova Scotia is a bit more direct than most provinces in its back-to-school guide, suggesting that preprimary educators work toward spending at least 40 per cent of the day outside when able to do so. For primary to Grade 12, “teachers are also encouraged to hold classes outside as much as possible. Priority for outdoor classes should be given to physical education.” But some parents and teachers are baffled at how, exactly, that might happen, given that the plan doesn’t include examples of how these outdoor classes would work.

This absence of a co-ordinated and detailed vision from the top has left school boards, teachers, principals and even individual community members working to fill in the gap and come up with their own solutions. In Gatineau, the principal of Pierre Elliott Trudeau Elementary School purchased tents and logs for outdoor classes that can be booked by teachers in 50-minute increments. A couple near Grandora, Sask., is turning their land into an outdoor classroom that they’re hoping will be used by local educators.

Early 20th century Toronto, with its forest and open-air schools, is a far cry from the big city today: There are nearly 600 schools in the Toronto District School Board, plus several hundred more operated by Catholic and francophone school boards. Toronto is different from Truro and Tofino so it’s obvious there is no one-size solution for running open-air classes. There are bureaucracies and liabilities to navigate as well. But it’s not for nothing that the pandemic is being compared with the Second World War. It requires a mobilization of bright minds, funding and a lot of nitty-gritty logistical work.

It’s easy to speculate that cash-strapped governments and school boards are reluctant to pay for tents or picnic tables now in part because everyone is hoping that a vaccine or some form of treatment will stop the coronavirus fast. But stacks and stacks of research papers argue kids are happier and do better in school with more outdoor time. Couldn’t outdoor learning just become a part of regular school life when the pandemic ends? Even if the virus is eradicated soon, there wouldn’t be a need to rush back inside.

Explainer
Canada’s back-to-school plans: The latest news, and resources on COVID-19 and your kids
October 6, 2020 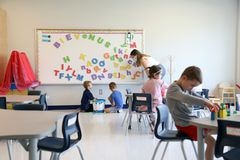 How safe is school? It depends on your neighbourhood
October 22, 2020 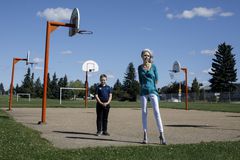 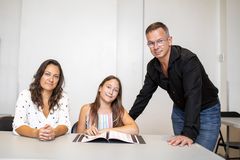