Evidently stung by the passage of the Hong Kong Human Rights and Democracy Act in the United States, the Hong Kong government issued a multipronged response: It denied that human rights had been eroded, granted permission for a mass rally on Sunday and castigated political figures for urging foreign governments to interfere in Hong Kong’s affairs.

The Sunday rally was organized by Civil Human Rights Front, the same organization that had co-ordinated two massive marches in June, when a million or more people took part. It was the first time police had given the group permission to hold a protest since Aug. 18.

Much was riding on the outcome of this demonstration, the first since pro-establishment parties were badly trounced in district council elections last month. There was much trepidation that the peaceful march would end in violence, as so many demonstrations had in recent months. The Civil Human Rights Front assigned 200 marshals to ensure that protesters adhered to the route agreed upon with the police and to maintain order.

In the end, it was a victory for both sides – the protesters and the police. Organizers said 800,000 people had taken part, and a government statement issued Sunday night agreed.

“It was in general peaceful and orderly,” the government said, adding, “Today’s procession, as well as the 50,000 public assemblies and processions held in Hong Kong over the past five years, are testimony to the freedom of peaceful assembly, of procession, of demonstration and of speech enjoyed by the people.”

The organizers ended the rally early and asked marchers to go home. Some who were prepared for combat were also persuaded to leave.

On Friday, the government issued a highly unusual statement denouncing legislators and other political figures who had “urged foreign governments or legislatures to interfere with the affairs” of Hong Kong.

“Some politicians in Hong Kong openly supported the United States' 'Hong Kong Human Rights and Democracy Act,' and suggested similar legislation in other countries or regions with the intent to demand foreign intervention in Hong Kong affairs,” the statement asserted. “This only conveys the wrong message to violent protesters and misleads them into thinking they have gained the support from other countries or regions. These politicians must bear the responsibility for society descending into chaos.”

No individuals were identified, but several pro-democracy activists recently flew to Australia and met with politicians there.

One of them, legislator Jeremy Tam, who spent his teenage and university years in Australia, said it was up to that country to create legislation to support the pro-democracy movement in Hong Kong – that all he and his group could do was “present a case.”

Hong Kong Chief Executive Carrie Lam continues her hardline position of offering no concessions to the protesters, but her supporters appear to be deserting her.

Felix Chung, leader of the pro-establishment Liberal Party, has thrown his party’s weight behind some of the protesters’ demands.

On RTHK, the public broadcaster, he called for three actions, "The first being the establishment of an independent inquiry which I see as the bare minimum. The second being the restructuring of the government in order to direct accountability for those responsible for the crisis. The third action is to think about starting the conversation of political reform.”

Starry Lee, chair of the main pro-establishment party, the Democratic Alliance for the Betterment and Progress of Hong Kong, castigated senior members of the Lam administration during a motion debate on whether to start impeachment proceedings against her. However, her party voted against the motion.

In calling on Sunday’s marchers to disperse, Jimmy Sham of the Civil Human Rights Front also called on Ms. Lam to respond to their demands, in particular one that calls for an independent commission of inquiry into the role of the police in the protests over the past six months. Despite the peaceful march, she again refused to respond.

This calls to mind a remark made by Jasper Tsang, a former president of the legislature and a staunch member of the pro-establishment camp. In a recently published interview, he said the Lam government “is unwilling to do anything until it is too late.” 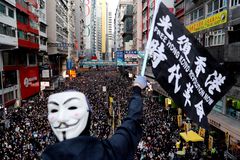 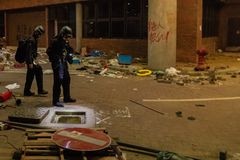