Last Wednesday, Jonathan Marchand rolled up onto the lawn of Quebec’s National Assembly and parked his wheelchair in a three-by-three metre cage.

He has vowed to stay there until he is “freed” from the long-term care facility where he has lived for almost a decade, and can return home.

Mr. Marchand, a 43-year-old computer engineer, lives with muscular dystrophy, a condition in which muscles progressively weaken. In 2010, he underwent a tracheostomy and since then has used a ventilator to help him breathe. Mr. Marchand spent two years in hospital before being transferred to a CHSLD (Centre d’hébergement et de soins de longue durée), or long-term care facility, where he has lived since 2012.

Technically, he requires 24-hour-a-day care but said that, like anyone else, he has the right to live independently in the community.

“In the CHSLD, I’m a prisoner of the state,” Mr. Marchand said. “I’m trapped and I want to get out.”

During the COVID-19 pandemic, a lot has been written about the living conditions of elders in institutional care, but little attention has been focused on younger people with disabilities who also live in long-term care.

“We don’t know how many young people are living in LTC homes. What we do know is there are far too many,” said Shelley Fletcher, executive director of People First of Canada, a group that promotes deinstitutionalization of people with disabilities.

Mr. Marchand said there is no reason for him to be living in an institution populated principally by octogenarians with dementia who are dying. The care he requires can just as easily – and more humanely – be provided at home.

Specifically, Mr. Marchand wants Quebec to create a self-directed care program. He has even created a not-for-profit group, Coop ASSIST, to pilot the idea.

Self-directed or self-managed care programs exist all over Europe and in several Canadian provinces. They are designed so people with long-term medical and personal assistance needs (principally people with physical disabilities) can purchase the care they need to live independently.

The care, as it would be in long-term care or home care programs, is paid in part by the recipient and, depending on a person’s income, subsidized by the state. Self-directed care, however, requires significant commitment by the recipient, who essentially has to set up a business and hire staff such as support workers, nurses and physiotherapists to care for them.

But bureaucracy is something people who live with physical, developmental and psychiatric disabilities know all too well. In Quebec alone, there are 247 programs for people with disabilities spread over 19 ministries and para-governmental institutions.

Manitoba, Saskatchewan, Alberta and Nova Scotia all have well-established self-directed care programs. British Columbia has one of the most expansive programs, Choice in Supports for Independent Living.

Ontario’s previous Liberal government had an ambitious plan, creating a stand-alone agency called Self-Directed Personal Support Services Ontario. But the new Conservative government shut it down before it even got going and replaced it with a more modest program, Family Managed Care, that is directed largely at families of children with severe disabilities.

Marguerite Blais, Quebec’s Minister Responsible for Seniors and Informal Caregivers, visited Mr. Marchand in his cage last week and said the province is studying some of those models as it works to improve home care. The minister said she hoped Mr. Marchand could be back home within two years.

He said that isn’t good enough. Inclusion of people with disabilities in mainstream society needs to be supported not only in theory, but in practice.

Mr. Marchand said his living situation was not great to begin with, but the lockdown of long-term care homes because of COVID-19 made it even worse. Among other things, he could not see his partner, who had visited every day for a decade, for almost five months.

“Living in long-term care is no life,” Mr. Marchand said. “I’ve got no future. Nothing to look forward to.”

The common assumption, Mr. Marchand said, is that institutional care is cost-effective and self-directed care is too expensive. But that’s not true.

The other concern is that there would be an overwhelming demand, again with the worry being cost. But Mr. Marchand estimates that only about 30 to 70 people in the province would have the interest and ability to use self-directed care.

“The obstacle is not money, it’s political will.”

On Monday night, Mr. Marchand took down his cage after the province promised to get him out of long-term care as soon as possible and fund a pilot project on self-directed care. “It’s hard to cry victory but they heard me – and people with disabilities aren’t heard very often,” he said.

Opinion
Looking back at my time in government, I’m haunted by our handling of senior care
July 31, 2020 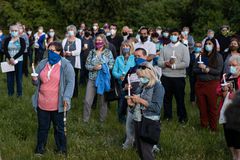 Opinion
Ontario seems to have its priorities out of whack
Subscriber content
July 15, 2020 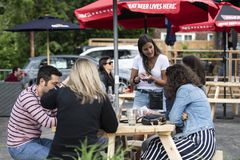