Aisha J. Silim is a former journalist and graduate of the London School of Economics. She is also a founder of the Toronto-based network Foodies of Colour.

When they immigrated to Canada and opened up what would become a popular Syrian restaurant in Toronto, the Al-Soufi family became a quintessential Canadian success story.

In 2017, as debate continued to swirl about Syrian refugee resettlement, Husam and Shahnaz Al-Soufi launched Soufi’s, which served Syrian street food specialties. They employed refugees who literally wore their culture on their sleeves: Their signature yellow shirts were emblazoned with the motto “From Syria with Love.”

For its efforts, the local community and even the New York Times held the restaurant up as a testament to Canada’s embrace of immigration and multiculturalism.

But that success abruptly unravelled this week: two years after opening, the family shut down the restaurant.

“As a result of numerous hate messages and death threats we’ve received over the past week, we’ve decided to permanently close our shop," its statement read. “Our decision is made with a heavy heart in [an] effort to maintain our family and staff’s safety.”

Those threats began after a widely shared video showed their son Alaa Al-Soufi protesting a People’s Party of Canada event in Hamilton, wearing a face mask as he stood among people shouting and blocking the path of an elderly woman and her husband trying to attend. The Al-Soufis issued an apology, and acknowledged that he should have handled it differently.

But that wasn’t the end of the matter. According to the family, people revealed their son’s identity online, published his personal information and sent them threats. He was physically assaulted in Toronto over the weekend, prompting the family to shutter the restaurant. It looked like their Canadian success story had come to an end.

I imagine the family watched with concern as racist bullying and rhetoric rose south of the border, never thinking that a movement that trafficked in anti-migrant sentiment would focus on Soufi’s as the target of their vitriol.

But we shouldn’t kid ourselves. Canada is not immune – and much like the spread of Trumpism, anti-migrant rhetoric and sentiment is on the rise in our political discourse.

The seeds of this sentiment have always been present here. Just ask the Indigenous peoples of this land, the racialized people disproportionately incarcerated in our jails and the traumatized families of victims of 2017′s mosque shooting in Quebec City.

Here, as much as in the United States, rhetoric against refugees and immigrants is premised on the false belief that they are expensive drains on society, rather than productive citizens. They are burdened with the need to prove their humanity and economic worth in their host country.

The Al-Soufis didn’t just meet this unfair standard – they exceeded it. Through their family-run business, they contributed their history, culture and entrepreneurial spirit, while creating a space for Syrian refugees to make a living in their new country.

As a food journalist, I have seen immigrants use food as a safe harbour. Food is a language that bridges the gap between them and their host countries, and they open restaurants to showcase their culture in ways that reassure society that they are here to serve the community and be industrious in apolitical ways.

So what was the Al-Soufis’ cardinal sin, in the eyes of a racist and anti-migrant movement? Straying away from an ideology that says migrants should be eternally thankful to their host country. The Al-Soufis dared to try to live the full range of the Canadian experience, including freedom of dissent; they weren’t afforded this privilege.

This sense of expected gratitude is at the core of the disdain for migrants in the United States and Canada, especially refugees. “There were unspoken conditions to our acceptance, and that was the secret we were meant to glean on our own: we had to be grateful,” wrote Dina Nayeri in the Guardian, about her family’s experience fleeing Iran for asylum in Oklahoma and then London. “[The refugee] must stay in his place. That’s the only way gratitude will be accepted.”

As much as we’d like to believe otherwise, these sentiments are as Canadian as our embrace of multiculturalism and diversity. The question is which one will win out – but the speed and strength by which this movement is spreading, as evinced by the hatred-fuelled collapse of Soufi’s, should alarm us.

What should give us some optimism is the outpouring of support for the family, from federal party leaders to Mohamad Fakih, a prominent Lebanese-Canadian restaurant owner who announced that his staff would assist in re-opening Soufi’s on Friday. Let’s hope this is the side that Canada lands on in this debate. 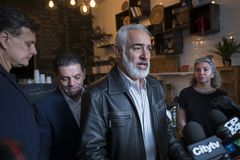 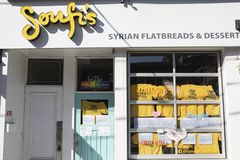