Jean-Pierre Gorkynian is a Montreal-based writer.

My cousin Gio weaves between cars to the beat of electro music. Outside, the streets are crowded. The sidewalks are swarming with people, too. Street vendors, taxis and motorcyclists all rub shoulders The roads are lined with cafés and terraces filled with backgammon players and hookah smokers. We are in Aziziyeh, one of the most upscale areas of Aleppo.

Last month, I returned to the city, for the second summer in a row, to finish work on my novel. Things had changed, ostensibly for the better: There was a decrease in bombings in the northern suburbs of the city; a noticeable disappearance of roadblocks, especially in West Aleppo, where they once stood every two or three blocks. There were people outside – shopping, hanging out and relaxing without any fear of getting bombed. The Russian soldier, formerly parked on the asphalt below my aunt's apartment, roasting under the blazing midday sun, outfitted in his massive military arsenal, had been replaced by a Syrian policeman, his shirt unbuttoned, playing aimlessly with his baton under the shade of a tree. The city was, from my outsider's perspective, returning to normal while, nearly 50 kilometres to the west, Idlib would soon be preparing for battle.

Since my last visit, which dates back to around this time last year, the Syrian regime, with crucial support from Russia and Iran, had succeeded in winning several decisive battles: Raqqa and Hama in October, 2017, Eastern Ghouta in May, 2018, and most recently, in late July, Deraa, birthplace of the Syrian uprising. This week, the Norwegian Refugee Council warned that as many as 700,000 civilians could be displaced following an expected Syrian regime offensive against opposition factions in Idlib, a (mostly) rebel-controlled province west of Aleppo where up to three million people are crammed. With the Islamic State reduced to its last entrenchments, and the rebellion broken up into myriad small groups scattered all over the country, plagued by internal wars, Syrian President Bashar al-Assad has sworn to recapture every inch of Syria. A three-way summit between Russia, Turkey and Iran was held in Tehran on Friday to “avoid a massacre” in northwestern Syria; at the summit, Iran and Russia rejected Turkey's calls for a ceasefire.

Numbers are hard to pin down, but seven years of war has resulted in approximately 500,000 deaths and 11 million displaced persons. My cousin Gio was barely 16 years old when the conflict started in the spring of 2011 (he is now 24). From a bourgeois Christian family, he quickly positioned himself in favour of the regime and denounced an international conspiracy against his homeland. Strongly politicized, he used Facebook to praise the Assad clan and the Syrian army victories. Many of his friends died in combat, but he was able to pay the US$8,000 fee to avoid mandatory military service. Fear or family responsibilities? The subject is too much of a taboo to dig further. However, his remorse is palpable. He now lives in Beirut, in neighbouring Lebanon, where he works as a salesman alongside his father; what they earn must cover both their subsistence and that of family members who remain in Syria.

On my arrival in Beirut, I find my cousin accompanied by a girl about his age. Her name is Mariebelle. Originally from Aleppo, she fled the war with her family in 2013 to live in Sweden, on the outskirts of Stockholm, where her uncle lives. She tells me she will be travelling with us. Her motives? In spite of her parents, she wants to return to Aleppo to finish her studies, get a job and make a living there. Or at least, give it a try. Why? I ask. Sweden did not suit her? No, she said. It's "a boring country." In her pockets, she has US$5,000 of savings to embark on the adventure, which she believes should be enough to cover her expenses for about a year and a half, provided of course she lives with her aunt, who still lives there.

Like last year, I get my visa in a few minutes, thanks to my parents’ papers – both are Christians from Aleppo, as is clearly indicated on their passports, which I took with me. However, the Syrian taxi company responsible for linking Aleppo and Beirut assures us that they are overwhelmed, even telling us that we must wait two or three days before they can prepare us a car among its fleet of 30. After negotiations, we manage to charter a vehicle and a driver for the next day.

We leave Beirut and head toward the border at Dabousieh, which serves mainly as a transit for goods and migrants in a regular situation. Further south, towards Ersal, there are tens of thousands of refugees, massed in the camps, attempting a return to areas under the Syrian government’s control, following local agreements, according to the latest briefing from the United Nations High Commissioner for Refugees.

Which is not the case for Gio or Mariebelle, anyway. They are upper-class Christians from Aleppo. When the rebellion took the country’s economic capital, an event they perceived from their own confessions as a "rush of savage peasants" from the surrounding countryside, their families did what they thought was necessary to do: empty their bank accounts, keep the cash at home, in order to stay ready to leave, one day or another.

Strangely, when all of this started, I had never asked Gio’s opinion about the war. There was indeed a language barrier, but for me as a Canadian, there was no foreseeable compromise on the democratic future of that country, even if I was powerlessly witnessing his family’s decline. For four years, Aleppo remained divided between its western part, held by the regime, and the area to the east, controlled by a multitude of rebel groups, each side seeking to encircle the other. The war ravaged many businesses and industries while inflicting heavy damage to infrastructure – a real disaster for Gio’s father, a supplier of hydraulic parts and equipment, whose four warehouses scattered throughout the city have been destroyed.

"At first, we were sure that the rebellion wouldn’t last," Gio confesses. But when the fierce fighting destroyed his father’s businesses one after the other, his family quickly found itself without work. "My father spent his days playing solitaire. He was going crazy. We had to find something to keep us busy. That's how we got into pastry." Betting on my aunt's culinary reputation, they started making snack balls of different flavours: coconut, apricots, white and dark chocolate, dates. "We were working under the light of an LED lamp plugged into a telephone jack. My mother prepared the mix, my sister made the balls, my brother decorated them and my father put them in gift boxes and wrapped them up. We went out to sell them at church, markets, cafés and restaurants. It lasted 10 months."

But quickly, raw materials became scarce. "We had no electricity, no water, no gas to sell our products abroad. The chocolate and the coconut had become untraceable. And I had to cross a sniper’s line to get the gift boxes!" It became obvious that this business was no longer viable. Without a source of income, the family fortune and life savings began to disappear before their very eyes. This is how Gio and his father decided to try their luck in Beirut.

In its latest report, the World Bank estimates the cumulative losses of Syrian GDP at around US$226-billion for the years 2011-16. The organization also estimates that more than 25 per cent of housing in the country was severely damaged and destroyed. However, when you are there on the ground, this figure seems less than the extent of the apparent damages. Jdeideh, for example, a centuries-old suburb of the old city of Aleppo, full of vestiges of the Mamluk era, was a commercial centre of the city, in addition to sheltering many churches, minarets and hammams around which a whole popular neighbourhood was built. Today, to see the white stone turned into rubble, one has the impression that it is a field of ruins as far as the eye can see.

“I swear to God," says Gio’s best friend, HG, waving his cigarette, "there was a time where the whole planet was fighting here, in the streets of Aleppo.”

Not quite, but not too far from the truth. More than 80 countries have been directly and indirectly involved in this war.

Back in Montreal this week, I've thought a lot about how a conflict that started with legitimate claims for freedom and democracy descended into such bloodshed – bloodshed that could soon grow much, much worse, depending on what happens in Idlib. I remembered something HG said to me back in Aleppo.

Because of the war in Syria, the balance of power in the region has been destabilized. And it has become a proxy war involving many of the world's major players: the United States, still reeling from the Iraq fiasco; Russia, a country looking to cement its influence; China, which has reportedly offered to help the Syrian army retake Idlib.

Although there have been few Western casualties in this conflict, I hope our historians will consider it as the Third World War. Will they? And what will they say? One thing is sure: It is the great powers that pull the strings of this world. Although I am writing a book about Syria, they are the ones who will ultimately decide which story is told. 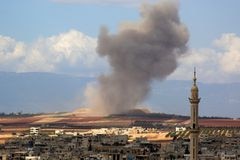 Trump says he did not discuss assassinating Syria’s Assad
September 5, 2018 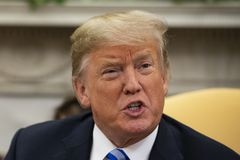 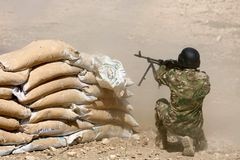