The sight of a political convention surrounded by protesters has a rich history in this country. And often those on the inside have little time or sympathy for those on the outside.

Following suit, Alberta Premier Jason Kenney received a hero’s welcome indoors at the United Conservative Party convention this past weekend, even as placard-waving demonstrators took his name in vain outside the hall, angry over his government’s proposed budget cuts.

We are witnessing the opening stage of a war Mr. Kenney has declared on profligacy in Alberta’s public sector. It’s a campaign that should have been waged by the government long before now, but no one’s had the courage to face the unionized blowback such a move was always going to incite.

And yet, as belt-tightening exercises go, Mr. Kenney’s program is relatively modest. In the early 1990s, then-Alberta premier Ralph Klein chopped public-sector spending by 20 per cent, reducing salaries along with it. However, the gold standard of restraint in recent history belongs to British Columbia’s Social Credit government of Bill Bennett.

In 1983, Mr. Bennett’s government introduced 26 pieces of legislation that slashed funding for core services across the board. Two of the bills were particularly grievous, as they gave government the power to gut contracts, gave employers the right to fire without cause and extended wage controls indefinitely.

Mr. Kenney’s government, by comparison, recently tabled a budget that will trim spending in the coming years and reduce the size of the public sector, although he says much of that will happen through attrition. Union officials say the cuts could affect as many as 7,000 jobs by 2023. His government’s first budget lowered operating spending by less than 3 per cent over the next several years. Hardly draconian stuff.

There have been many studies done in recent years that have shown just how far out of whack public-sector spending in Alberta has become compared with the rest of the country. One recent analysis estimated that if Alberta reduced its per capita public-sector spending to the average of Ontario, Quebec and British Columbia, it could save $10-billion annually.

This extravagance has appeared especially incongruous in a province genuinely suffering as a result of the precipitous drop in the price of oil.

So the fight is on.

Major labour organizations in Alberta have put the Premier on notice that they will fight his plans to the end. About 1,000 protesters showed up at the UCP’s convention this past weekend to serve notice that public-sector workers are now engaged in the struggle to save jobs. This showing was variously described in news stories as “huge” and “massive.”

Not really. “Huge” and “massive” were the 60,000 that marched outside a Social Credit party convention in 1983 to protest the government’s restraint plans. Or the 40,000 who took to the streets the week before that. Or the 25,000 that amassed on the lawn of the B.C. Legislature a week before that.

I don’t think the sight of a thousand protesters is going to scare Mr. Kenney into abdicating the responsibility he feels to get his province’s fiscal house in order.

He knows he not only has his party on his side, but much of the province, which includes tens of thousands of out-of-work oil and gas industry workers. There are many in Alberta who would kill to have a government job with all the perks that come with it, including an indexed pension.

Alberta’s public-sector workers need to look around and see how lucky they’ve been. Their counterparts in B.C. took years of 0-per-cent wage settlements when the economy in the province was not in the greatest shape. Only in recent years have they begun receiving modest increases that are tied to GDP growth.

Not surprisingly, union leaders in Alberta are already warning of calamity if the government insists on moving ahead with its agenda. Gil McGowan, head of the Alberta Federation of Labour, has even allowed the words “general strike” to pass his lips – two words far easier to say than act on.

A general strike would be disastrous for the province and would pit Albertans against one another. Suddenly, the enemy would no longer be Ottawa – but greedy public-sector unions that believe they should be immune from the consequences of a sour economy and soaring provincial debt.

Mr. Kenney has lots on his plate these days, including now a potentially ugly confrontation with the province’s public-sector workers. However, I’d say he’s got a far better chance of winning that fight than some of the other ones he’s started. 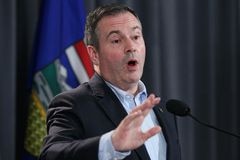 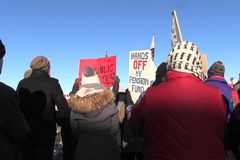