It began with tens of thousands of people protesting, most of them peacefully, on the Palestinian side of the Israel-Gaza border barrier on Friday, and it culminated in 18 deaths, and hundreds of injuries, caused by Israeli military bullets – and in the aftermath, an international response that drew stark attention to U.S. President Donald Trump’s ineffective approach to Middle East conflict and the increasing isolation of the Palestinians.

The events on Friday, as Jews prepared to mark Passover, were the biggest outbreak of Israeli-Palestinian violence since 2014. The changed international circumstances around the conflict were apparent by Monday: Prime Minister Benjamin Netanyahu’s right-wing government was unapologetic and even expressed pride in the incident; Saudi Arabia and the United States declined to speak up against the shooting of unarmed civilians; a United Nations Security Council attempt to inquire into the incident was quashed by Washington.

The protests, known as the “March of Return” to mark the anniversary of Israel’s 1976 seizure of Arab-owned land, were organized by Hamas, the Palestinian militant organization deemed a terrorist group by many countries, including Canada.

Their larger intent, Hamas officials told reporters, was to confront both Mr. Netanyahu and Mr. Trump over their neglect of the Palestinian plight and the decision by Mr. Trump to recognize Jerusalem as the capital of Israel and move the U.S. embassy there – a move seen by many in the region as an abandonment of Middle East peace efforts. By removing the promise of a Jerusalem capital from its scanty collection of bargaining chips, Washington no longer appears to have much leverage to bring Mr. Netanyahu to compromise with the Palestinians – and his response on the weekend made that abundantly clear.

After soldiers opened fire on the protesters with live ammunition as well as plastic bullets and other non-lethal ammunition, Israeli officials acknowledged that none of the protesters had attempted to cross the border barrier, and video of the incident did not show any armed protesters (some threw rocks, rolled burning tires and used slingshots, but the great majority were simply marching). While Israeli officials claimed that some protesters appeared poised to fire weapons or charge the border, video of the incident showed several protesters shot in the back while fleeing.

Given the lack of clear-cut cause for their use of lethal violence, the Israeli official response was remarkably defensive and even provocative. Avigdor Lieberman, Mr. Netanyahu’s defence minister, said on Sunday that “I think all of our troops deserve a medal” for the shooting. The Prime Minister wrote “Well done to our soldiers” and declared that “Israel acts vigorously and with determination to protect its sovereignty and the security of its citizens.”

The Israel Defence Forces Arabic-language website posted a video showing one of the unarmed protesters falling as a rifle bullet struck him in the leg, under the caption “This is what will happen to you if you try to get close to our border.”

And the IDF’s social-media team posted a tweet on Saturday (and later deleted it) seemingly defending the shooting of fleeing protesters: “Nothing was carried out uncontrolled,” it read. “Everything was accurate and measured, and we know where every bullet landed.”

Hamas, for its part, acknowledged that some of those killed had been its fighters, albeit unarmed. Indeed, the immediate motive of the protests may have been to draw a disproportionate response from the Israeli military without the use of force or terrorism by Hamas militants.

Last week, Hamas leaders repeatedly told protesters to avoid violence and not to cross or challenge the border, and instead to march and pitch tents close to the border (Israel made it clear in advance that it would deploy snipers). In the wake of the killings, Hamas pledged to continue the protests, which on Friday drew an estimated 30,000 people, until May 15, when Washington intends to move its embassy and Israel marks the anniversary of its independence.

Most significant may have been the confused response from Washington. United Nations Secretary-General Antonio Guterres called for an independent investigation into the killings. The UN Security Council drafted a statement denouncing the killings and calling for an inquiry but the United States blocked its release.

Initially, Washington appeared to respond as it would have done in previous years – by condemning violence and calling for a return to a peace plan. State Department spokeswoman Heather Nauert urged Israel and the Palestinians on Friday to “take steps to lower tensions” and cautioned that “violence furthers neither of these goals.”

But that message was undermined by Jason Greenblatt, Mr. Trump’s Mideast peace envoy, who in advance of the protests blamed Hamas unilaterally for a “hostile march” and for “inciting violence against Israel.”

It was Mr. Greenblatt’s message that appeared to dominate, as the White House and other senior administration officials were silent on the shootings. Also conspicuously silent was Mr. Trump’s favoured Mideast ally, Saudi Arabia, which refused a request by Palestinian president Mahmoud Abbas to hold an emergency summit to investigate the killings. Likewise, neither Saudi Arabia nor Egypt appear to be protesting Mr. Trump’s Jerusalem embassy move.

On the weekend, White House officials told reporters that they are still pursuing an Israeli-Palestinian peace process, and have a proposed deal in the works. But the response to Friday’s violence showed that Washington currently possesses neither the tools for, nor the interest in, a lasting reconciliation or an end to violence. Under those circumstances, the escalating Gaza protests, if they are able to minimize violence on the Palestinian side, may be a carefully considered strategy to draw international sympathy and embarrass the Trump-Netanyahu alliance. 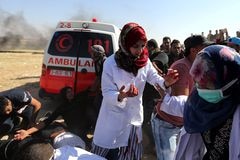 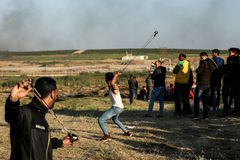 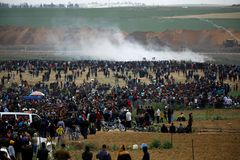