This weekend Canadians were horrified by the news of a gunman opening fire at the Tree of Life Synagogue in Pittsburgh. It has been called the deadliest attack on Jewish people ever to take place on American soil.

As we try to come to terms with this senseless anti-Semitic attack, some Canadians might try to explain away their grief by telling themselves that this is an American problem.

But the truth is that anti-Semitism, hate and intolerance are not confined by borders. The threads of hatred and intolerance that brought a gunman to open fire on people in their place of worship are also woven into the fabric of Canadian society.

Anti-Semitism continues to be a real and disturbing part of life for Jewish people living in Canada.

In 2018, anti-Semitic incidents are still a regular part of the news cycle – a swastika painted on a door, a tombstone defaced, a racist flyer posted on the street or online. Some might try to downplay these as the actions of a misguided few, not to be taken seriously. But the fact is that those who publicly call out this kind of hate and intolerance in Canada often face intimidation and death threats. Clearly, this is not a game.

With the rise of populism around the world, and the internet connecting us like never before, we are witnessing a growing callousness and intolerance for newcomers and minority groups.

Anti-immigrant rhetoric and protests on our streets and online are getting louder. As these sentiments are stoked, it could become an issue that sows division among us during elections.

This is a disturbing trend for a country built on multiculturalism, inclusion, acceptance and diversity.

The last time Parliament conducted a broad study on hate was in 1965. The Cohen Committee found that: “However small the actors may be in number, the individuals and groups promoting hate in Canada constitute ‘a clear and present danger’ to the functioning of a democratic society.”

More than 50 years later, Canada is a far different place. Canadians see human rights as the central pillar of the Canadian identity. Yet despite years of progress toward equality, hate remains a clear and present danger. We are seeing more and more hate and intolerance toward people simply for who they are, including Indigenous peoples, Muslims, women, members of the LGBTQ community and people of colour.

Nobody is immune to the damage inflicted by hate. Hate creates division. Hate focuses on our differences. Hate dehumanizes people and slowly erodes our sense of empathy and compassion toward fellow human beings.

Hate is a precursor to violence. It inspired a gunman to open fire in a Quebec City mosque. It encouraged a man to drive a van down a busy sidewalk in Toronto.

Canada should take another look at hate. The world has changed. Everyone has the power to be a broadcaster now. People can be louder than ever before and influence more people than ever before; the threat posed by hate is amplified. We need to take a close look at how it spreads and how to hold accountable the people who spread it.

No form of hate should go unchecked in Canada. It harms our friends and our neighbours. It is a cancer that attacks the health and the prosperity of our society. Whether it’s a slur, a poster, an online meme or a violent incident, it hurts us all.

In recent times, we have seen Canadians from all walks of life coming together in the streets and online to reject racism, sexism and other forms of hate in society. More people will hopefully follow their example. Complacency is complicity. 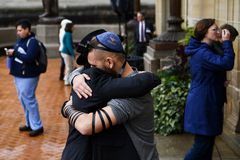 One of Pittsburgh synagogue shooting victims grew up in Toronto, rabbi says
October 28, 2018 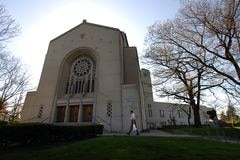 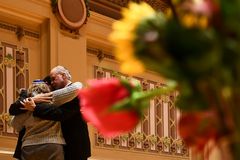