The donnybrook that was the Las Vegas debate furnished further evidence of a remarkable who’d-have-thunk-it trend in the Democratic Party: Social democrats, a group akin to Canada’s New Democrats, are taking command, with Bernie Sanders at the forefront.

The Vegas barnburner saw the Democrats give Mr. Trump a free pass, while torching their own house instead – all except its pink-shaded wing.

With a stunning performance in which she relentlessly bombarded opponents in a blitzkrieg unlike any on the debate stage to date, Elizabeth Warren revived her flagging candidacy.

Though she doesn’t describe herself as a democratic socialist, she is a policy soulmate of Mr. Sanders. He put up a formidable showing at the debate while the great new hope of the party’s moderates, Michael Bloomberg, was bludgeoned, having brought a toothbrush to a firefight.

Pete Buttigieg and Amy Klobuchar, two other centrists, beat up on one another. Joe Biden, showing passion that’s been missing for so long, had a strong night but was overshadowed, as was most everyone else, by Ms. Warren.

If she takes flight as a result of her performance, she could bite into Mr. Sanders’s lead. But there are not as many candidates on the left to divvy up the Democratic primary vote as there is in the middle, where no favourite has emerged.

The U.S. media establishment tends to fall in line with the conventional wisdom that says Mr. Sanders would be a disastrous choice for the party. But they forget that he is backed by a unflinchingly loyal base; that he has the youth of the party behind him; that he has authenticity, having held to the same credo for decades; that the country with its burgeoning minority populations is moving leftward; that he leads Mr. Trump in hypothetical head-to-head polls.

The Vegas debate doesn’t kill the Bloomberg candidacy. Millions more Americans will see one of his staggering number of TV ads than they did that single debate. And there will be be another debate in South Carolina next week where he will have a chance to recover.

But Vegas was a huge test for him, his first appearance from behind the curtain – and he blew it. Since he was not on the ballot in Nevada, he shouldn’t have even taken part, as former nomination contender Andrew Yang argued on CNN. Having decided to do so, he should have had well-rehearsed answers for the attacks that he knew were coming. He didn’t.

In her prosecutorial role, Ms. Warren was unchallenged. No one fired back. Six women of colour left her Nevada campaign complaining of racial insensitivity, but that wasn’t mentioned – nor were her misleading comments about her supposed Native American heritage, which prompted Mr. Trump to label her Pocahontas.

Mr. Bloomberg, who was less anemic in the second half of the debate, got off one good applause line against Mr. Sanders’s radicalism. “It’s ridiculous,” he said. “We’re not going to throw out capitalism. We tried that. Other countries tried. That was called communism, and it just didn’t work.” But the communism reference took it too far, allowing Mr. Sanders to smack back with “Cheap shot!”

Mr. Sanders’s impassioned plea for change from the bottom-up has big appeal to Democrats. He and Ms. Warren want bigger change (on health care, taxation of the wealthy, college accessibility, forgiveness of student debt, etc.) than others in the race.

Mr. Sanders will likely win Nevada and place high in South Carolina, where Mr. Biden could come out on top. Then it’s on to Super Tuesday, where California’s large number of delegates are up for grabs, with Mr. Sanders holding an imposing lead.

After Super Tuesday, he will likely be well ahead in the delegate count, and it’s quite possible Ms. Warren will be second. That makes for a left-side juggernaut ready to seize the Democratic Party’s reins. 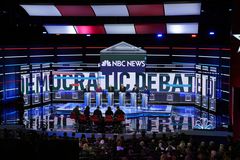 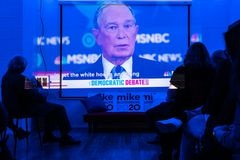