J. Michael Cole is a Taipei-based senior fellow with the China Policy Institute and Taiwan Studies Programme at the University of Nottingham, U.K., and an associate researcher with the French Centre for Research on Contemporary China.

In the months since China began to bring pressure on international airlines to remove all references from their websites, apps and booking services to Taiwan as anything other than part of China, I, along with many other Canadians living in Asia, had taken great pride in the fact that Air Canada had refused to be cowed by the authoritarian giant.

Sadly, that is no more. Joining a growing list of airlines including Qantas, Delta, British Airways and Lufthansa, that have yielded to pressure, Air Canada now uses a designation – “Taipei, CN” – that does not reflect reality, but can only please the leadership in Beijing, which refuses to acknowledge the existence of Taiwan as a sovereign entity.

Despite only having 19 official diplomatic allies, Taiwan −a vibrant democracy of 23.5 million people that shares many of the values we as Canadian cherish − entertains constructive ties with many countries around the world. An important economic partner of Canada, Taiwan is also home to as many as 60,000 Canadians. Taiwan has its own passport, its own elected government, military, currency and enjoys many advantages, such as visa-free entry, the Chinese people are denied.

China, meanwhile, has shed constitutional limits to the presidency, and in recent years has done much to undo a lot of the limited progress it had made in the past two decades or so – some of that with Canadian assistance – in terms of civil liberties. Freedom of expression, of belief, have been eroded; repression in the Xinjiang region has reached levels which border on conditions in a prison camp; activists, lawyers, academics, in and outside China, have been threatened, denied visas and taken to court merely for exposing the transgressions of a regime that brooks no criticism. Under President Xi Jinping, China has become worryingly aggressive in its territorial claims, going as far as to militarize the South China Sea, and is now seen as a threat to several smaller countries in the region. Under Mr. Xi’s guidance, China has also launched a series of initiatives, known as “sharp power”, to undermine democracies worldwide.

Beijing has also exploited Ottawa’s desire to sign a free-trade agreement with the world’s second-largest economy, to compel it to look the other way whenever it has violated the beliefs and values that define us as Canadians.

For Taiwan, Ottawa has been a solid partner, supporting Taipei’s efforts to join multilateral institutions such as the International Civil Aviation Organization and the World Health Assembly, which Beijing has prevented for political reasons. This Ottawa does because it understands the values of inclusion. And even though it “took note” of Beijing’s claims that Taiwan is part of China upon establishing diplomatic ties with the People’s Republic of China in October, 1970, Ottawa’s multifaceted engagement of Taiwan is guided by the recognition of its value as a distinct polity and partner.

We may be critical of Donald Trump’s White House for many things, but it spoke for many of us earlier this month when it referred to Beijing’s pressure on international airlines as “Orwellian nonsense”.

Understandably, Prime Minister Justin Trudeau’s government looks to China as an important economic partner to ensure our own prosperity, but we cannot afford to compromise the values, beliefs and traditions that make us who we are in the process. Canadian companies need not give in to bullying and blackmail for access to the Chinese market. Instead, we need to make it clear that this is a relationship of equals, one in which we have our own red lines.

Democracy, liberty and freedom should be areas of no-compromise in our negotiations with Chinese authorities. When we yield to Beijing’s preposterous demands, the way Air Canada did on how it refers to Taiwan, we display our weakness and our willingness to compromise what we believe in. A revisionist regime that seeks to undermine and alter the international system can only see such weakness as an invitation to demand more – and in doing so, we sow the seeds of our own misfortune.

I speak for many Canadians today in feeling ashamed for the decision by Air Canada, a company we can be proud of, to give in to Beijing’s coercion. Surely we can do better than this.

Opinion
China, the United States and the high stakes ahead
April 30, 2018 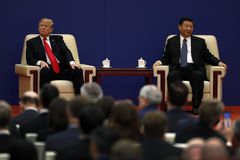 Opinion
A successful Trump-Kim summit would be a thorn in China’s side
April 2, 2018