Federal politicians have a summer election call hanging over their heads. But more than any other Canadian politician, Jason Kenney needs a return to more-normal life in the months ahead – even though so much is completely out of his control.

Alberta has an aggressive reopening plan starting Thursday, and it has to go relatively well to make the province’s voters less pessimistic about the economy and to ease voter anger at unpopular government decisions. Beyond provincial politics, the Alberta Premier also needs the wider world to get back to some level of busyness so predictions of higher prices for oil in the second half of 2021 come true.

Oil is still the province’s blessing, and curse. What has created great wealth also creates a never-ending cycle of wild swings – impossible to predict – in Alberta budgets. That was clear once again in Wednesday’s fiscal update, where the final report on last year’s budget wasn’t as bad as it might have been, in large part thanks to recent higher-than-predicted oil prices.

The 2020-21 budget year ended with a deficit of $17-billion, which is high. It’s much higher than the now-fantastical deficit projection of $6.8-billion, made by the government in its February, 2020, budget.

But it’s slightly more palatable than the $20-billion deficit forecasted just a few months ago, at third quarter. And it’s despite more than $5-billion in COVID-19 spending, including money from Ottawa, and a West Texas intermediate price for a barrel of oil averaging US$42.32 in the 2020-21 fiscal year – the lowest annual average price the Alberta government has recorded in 15 years.

“The pandemic, the global economic contraction, and the energy price collapse has created an incredible fiscal challenge for our province,” Finance Minister Travis Toews told reporters on Wednesday.

Now could be the turning point for the province’s finances this year. As the world reopens and making-up-for-lost-time emotional responses spill out, spending and consumption patterns among the world’s vaccinated people will change. There will be more flights and new vehicle purchases. The demand for activities that require fuel consumption could be high, quickly draining crude stocks from the past year and driving prices higher. WTI has stayed above US$70 for most of this month.

In the fiscal update, the government boasted that non-COVID-19-related operating expenses decreased, and that oil prices went higher in recent months.

“I am generally optimistic about the last half of 2021. And the reason for that optimism is what I’ve seen in the first half of 2021,” said Mr. Toews, citing strengthening commodity prices, improved energy company balance sheets, record oil sands production in some recent months, and an influx of new tech investment.

Still, Mr. Toews was circumspect about what the rest of 2021 will look like, saying more about the government’s outlook will be revealed in an August fiscal update. Any economic optimism must be balanced with the worrying spread of the Delta variant cases in countries from Malaysia to Britain, and the extension to global lockdowns and health restrictions. “I’m not making any predictions right now,” said the Alberta Finance Minister. “There’s a whole lot of uncertainty that remains.”

There are also the much bigger, longer-term fiscal questions for a province that has long prided itself for having no sales tax. On Wednesday, the Parliamentary Budget Officer released a report on the state of Canadian government finances and said plainly Alberta’s current fiscal policies are not sustainable.

“Permanent tax increases or spending reductions amounting to 3.1 per cent of GDP ($9.5-billion in current dollars, growing in line with GDP thereafter) would be required to stabilize government net debt” as a share of the economy in the decades to come, said the report.

The Alberta government says as it steadies the ship – with the hope the most consequential economic hits of COVID-19 are in the past – difficult fiscal decisions are still months away. Mr. Toews said Wednesday he hopes that by budget 2022 time, early next year, his government will be able to lay out a new plan for eliminating the deficit.

He reiterated the government’s emphasis on reducing per capita costs and delivering government services more effectively. But he suggested any panel examination of more steady sources of revenue, such as new taxes, isn’t likely to go ahead until closer to the next provincial election, scheduled for 2023.

Other longer-term issues still weigh on the province, including the pressure for some investors to divest from private-sector fossil fuels, and for Alberta to green its economy. Oil development is not only an economic benefit, but also a cost – including tens of billions of dollars that it will take to clean up old oil wells and facilities. At this moment, the NDP is breathing down the United Conservative Party’s neck in the polls, and Opposition Leader Rachel Notley is using her party’s plan to create a net-zero electricity grid by 2035 as a key talking point.

There are no easy solutions to a government so dependent on natural resources. The fiscal update also provided more details on a number of problematic energy project investments, including the government’s $1.3-billion cost for the now-cancelled Keystone XL project, major losses in the process of unloading crude-by-rail contracts signed by the previous NDP government, and the billions of dollars the government is contractually obligated to pay, no matter what, to support the one refinery to be built in Canada this century.

They are all projects Alberta governments signed on to in an effort to add value to natural resources, and to try to manage a small degree of self-determination as a lower-rung oil producer. While the contract on the Sturgeon Refinery was inked long before Mr. Kenney entered provincial politics, Alberta’s UCP government bears the responsibility for the pipeline investment.

Mr. Toews maintained Wednesday his government’s direct stake in the TC Energy Corp. Keystone XL project – a pipeline designed to provide direct access to U.S. Gulf Coast markets – had so much potential upside it was worth the high risk to Alberta’s finances.

Even staid government documents from the fiscal update are frank about the province’s unusually risky fiscal position: “Alberta relies heavily on revenue that is volatile and unpredictable, including non-renewable resources, corporate income tax and investment income.”

Another Alberta fiscal update, and another reminder that so much of the province’s economic fate is still tied to outside, uncontrollable forces. 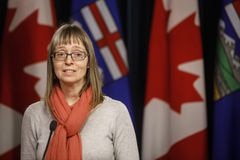