Another day, another photo-op focused on jobs and the economy without a woman. This week it was an agri-food exports announcement in Spruce Grove, which featured three men: Alberta Premier Jason Kenney, the Agriculture Minister, and the local MLA.

Yes, these three people were key to the particulars of the day. And there have been Alberta government news conferences as of late prominently featuring women, including one focused on cutting methane emissions last week. But too many United Conservative Party employment-themed media events, and in-house produced videos, are populated with Jasons – and also Ricks and Dans. They are not representative of 50 per cent of the population.

And lest you peg the complaint as superficial, it’s more than just visuals.

On Thursday, a new analysis from the University of Calgary’s School of Public Policy said the Alberta government’s decision to spend $10-billion on infrastructure-led job creation as the main pillar of its economic recovery strategy prioritizes work done by men.

“As it stands, women and men will not share equally in the benefits, as most jobs created by capital projects are in male-dominated sectors like manufacturing and construction,” say authors Anna Cameron and Vanessa Morin, and economist Lindsay Tedds.

Alberta is in tough financial straits, and the United Conservative Party government is sanely looking for ways to keep the economy moving. Its $10-billion pledge is a massive infusion of cash in the space of one year for one province. By comparison, the federal government’s similar scheme to spend an equivalent amount on broadband, energy retrofits, and agricultural infrastructure across the country through the Canada Infrastructure Bank will roll out over three years.

Women are less likely to benefit from the infrastructure cash, even though the pandemic has likely hit women workers in Alberta at least as hard as the men – and especially as some mothers leave the workforce or stop searching for jobs in order to take care of children at home. Despite increases in labour force participation over the past several decades, women continue to face low rates of representation in the trades, which will surely benefit with infrastructure spending.

“Historic” as the $10-billion might be, the authors argue, “the approach leaves women behind.”

There are caveats. Any $10-billion spend will trickle down to other sectors, even those not targeted by the government dollars. And as the authors of the study point out, there have been positive steps, including a recent $10-million government grant to get more women into solid-paying trades where they are traditionally underrepresented.

It’s becoming increasingly clear that the economic hit from the pandemic is not affecting all jobs, and people, equally. Lower-paid, younger and racialized workers have been particularly likely to lose work. The travel sector and Alberta’s oil and gas sector are now taking, and will take, a particular beating.

However, those who work in public-facing service jobs – including in restaurants, hotels, and hair salons – are also suffering. These are women-strong fields. The Kenney government is a clear ally to oil and gas, pipeline companies and infrastructure projects, but hasn’t been shy to tussle with public sector unions, school boards, or nurses' unions, where women have an outsized presence.

It might be that the UCP has determined that the province’s NDP, led by former premier Rachel Notley, so thoroughly dominates this public-sector space that it’s better for Mr. Kenney to focus his political messaging on parts of Calgary, rural Alberta, and other pieces of the electorate that tend to be more conservative, and male.

It is never to be underestimated that Mr. Kenney is facing massive pressure from the political right – a constituency that wants far less government intrusion, more Alberta autonomy, is open to separation, and doesn’t believe the Premier has been tough enough in his dealings with Ottawa. This political realm, too, is dominated by men.

Right now, it doesn’t win Mr. Kenney much support to talk extensively about “she-cession,” child care policy, or how the pandemic has been particularly devastating to the economic autonomy of working mothers with school-aged children. From a political gamesmanship point of view, the Premier and his advisers must know they’re unlikely to make major gains with women voters. They will be lucky to hold onto what they’ve got.

While Mr. Kenney is certainly no fan of the “identity” politics of the left – he has said it’s undermining social cohesion in liberal democracies – he has acknowledged that representation is important. Three years ago, before he was Premier, Mr. Kenney inherited a caucus – made up of the newly merged Wildrose and Progressive Conservative parties – with 25 men and two women. He identified this as a problem, and promised to pound the pavement to broaden his party’s support and recruit a “diverse” group of candidates, including LGBTQ-community members and women.

He was semi-successful in terms of increasing some representation in his caucus. He does have women in high-profile cabinet portfolios, including Sonya Savage in Energy (although she is a cabinet minister who easily, and logically, could be seen and heard from more often). No one in his caucus is openly gay. While the caucus includes some high-profile MLAs from diverse backgrounds, it’s more than three-quarters male.

The Alberta Premier still has difficulty appealing to women voters, and presenting an economic worldview that includes women, front-and-centre. And now that he has been governing for near 18 months, it’s becoming clear it might be less a blind spot and more a political strategy.

‘Only had so much fight in me left’: Two family doctors explain why they’re leaving Alberta
October 2, 2020 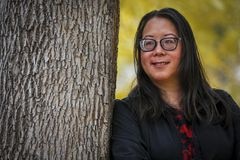 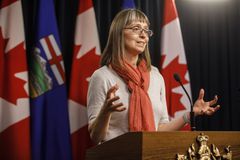