He met her on a bus in Shawinigan, Que., in 1951. Jean Chrétien was 17, Aline Chaîné 15. She lived two blocks away, and Jean’s older brother Guy had pointed her out to him.

She was from a working-class family, but there was an air about her that set her apart – a sense of refinement. “I used to see this lovely girl passing by our house,” Guy recalled to me in an interview for my two-volume biography of Mr. Chrétien. “I noticed she was probably the prettiest in town. I didn’t think in terms of Jean going out with her.'”

Jean hadn’t had any close girlfriends. With girls, he said he was "shy and an awkward dancer.” But with her, he took his chances at the dances after that day on the bus. It worked. She quickly became smitten, as did he.

When Jean’s mother, Marie Boisvert, met Aline, she was thrilled. She recognized this was the girl who could tame his wild instincts, get him out of the brawls and the pool halls, and make the rascal responsible.

She was so determined to make their relationship work that when Jean, who’d been kicked out of a couple of other schools, went off to seminary college in Trois-Rivières where the boys were forbidden to see girls, she would take Aline for secret visits. She would get permission from the principal to take her son outside the cloistered confines, and there she would hand him off to Aline. The authorities were none the wiser. “Mom would not have seen me for 10 minutes,” Mr. Chrétien recalled.

The bond was formed. From then on, said friend Laurent Déry, Jean was no fun anymore. It was all business. It was all Aline. They were “like two fingers on the same hand.”

She did for him exactly what his mother had hoped. No more school expulsions; no more boozing. She worked on his wardrobe, his presentation, his English. He had no choice but to change his ways, he recalled. If he didn’t, he knew he would lose her.

His raging ambition and fierce drive to succeed were not what impressed her so much as his sense of equality, his working-class values, his blunt-spoken candour. She referred people to a column about him that made the point that there wasn’t a phony bone in his body.

She also shared his resentment toward the intellectual snobs of Quebec, many of them separatists who looked down on him as peasant stock. He was never that, thanks in part to the cultural impact she had on him.

For her part, she preferred privacy. “I like people, but I don’t like to be out front,” she said. While tending to their household and their children, she became an accomplished pianist and learned English, Italian and Spanish.

Among wives of other leaders, she brings to mind Mikhail Gorbachev’s late spouse, Raisa Gorbachev, who had elegance, poise and intellect. She met the rural Mikhail at law school, when he owned one suitcase of clothes. She brought him sophistication and steeled him for the enormous challenges he’d face.

Like Ms. Gorbachev, Aline Chrétien played more than a background role. There were moments where she had a profound influence on the course of national affairs; when caucus rebels were hounding her husband to end his career in 2000, she convinced him to stay on and fight for a third term. “They are not going to push you out,” she told him. Her view, he recalled, was the turning point.

Not to be forgotten is the terrifying moment after the 1995 Quebec referendum, when a knife-wielding intruder made his way into 24 Sussex and all the way to the Chrétiens' bedroom door. While the prime minister was sound asleep, Aline got to the doors in time to lock them. Who knows what would have happened had she not?

As prime minister, Mr. Chrétien would interrupt his duties most every day to return to 24 Sussex, to see her and receive her counsel.

On the golf course recently, he’d said Aline wasn’t well. But his eyes suddenly brightened as he recalled the day he got a phone call from her while at a cabinet meeting. What could be so important? “I just scored a hole in one,” she said.

She scored many of those for him. It’s commonplace to hear leaders say they couldn’t have made it without the enduring support of their wives. With this prime minister, we can surely believe it. 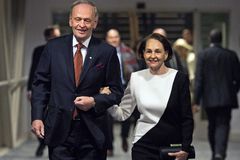