Avis Lang is the co-author, with Neil deGrasse Tyson, of Accessory to War: The Unspoken Alliance Between Astrophysics and the Military.

Among this year’s cascades of off-the-cuff pronouncements by the 45th U.S. President is one you may have missed: Donald Trump’s demand that the United States establish a separate new branch of the Defence Department devoted wholly to space. Predictably, this demand, issued on June 18 to the military’s top general, has been drowned out by coverage of his more outrageous bon mots and multiple distractions, of which the list lengthens almost daily.

Rather than being a sub-unit of the Air Force, the Space Force would be “separate but equal.” Its purpose would be “American dominance in space.” Simply being present in space is insufficient for defence of the nation, President Trump asserted. Dominance must be the goal. “So important,” he repeated. Primacy, supremacy, superiority, command, control, leadership, unilateralism: These were to be valued. Sharing, co-operation, collaboration, interdependency, multilateralism: These were implicitly to be rejected.

In early August, U.S. Vice-President Mike Pence, again stressing the goal of dominance, announced that planning has begun. No matter your country of residence, if you want a de-escalation of dangers to planet Earth, you should probably track this story.

Space is not a war-fighting domain. It could be turned into one, but it isn’t one yet. Space war is not foreordained.

Only Congress has the power to authorize the creation of a distinct new branch of the military – although there are ways to sidestep that requirement, as has happened with Congress’s power to declare war, which it has not exercised since 1942. Now Congress authorizes funds for war rather than declaring it. And now the Pentagon has proposed a gradual approach to achieving a full-fledged U.S. Space Force by starting with beta-version components that would consolidate space personnel and functions currently distributed across the military’s multiple commands. Some members of Congress, from both sides of the aisle, are enthusiastic.

But not all top-ranking Pentagon staff favour reorganization. Initially, some gave it a thumbs-down. Among them was Secretary of Defence Jim Mattis who, half a year before Mr. Trump first gave voice to his vision of a sixth military force, wrote that he opposed the creation of “additional organizational layers at a time when we are focused on reducing overhead and integrating joint war-fighting functions.” Now he says that space “is becoming a contested war-fighting domain, and we have to adapt to that reality.”

In May of last year, the day after her swearing-in, Secretary of the Air Force Heather Wilson declared that space “is a war-fighting domain just like land, air, and sea.” Two months later, she described the call for an independent Space Force as “add[ing] more boxes to the organizational chart” and said that if her budget were bigger, she would prioritize “lethality and not bureaucracy.”

Somebody needs to remind America’s would-be space warriors that the United States, along with more than a hundred other countries, has signed and ratified the historic Outer Space Treaty of 1967 which, though not rich in detail, rejects hierarchy and the seeking of dominance. Defence, yes. Outright aggression, no. Alas, the boundary between the two is muddy, and in the middle of the mud is a military presence in space.

No matter who struck the first blow, actual space war would pose a greater threat to the United States and its 800-hundred-plus operating satellites – almost half the world’s total, according to the Union of Concerned Scientists – than to any other country on the planet. (Canada operates three dozen satellites, or about 2 per cent of the world’s total.) But harm to anybody’s non-military satellites, whether the harm be intended or unintended, passing or permanent, whether by cyber sabotage, a laser weapon, or one of the millions of chunks and shards of pre-existing orbital debris, could send daily life back to the days of the typewriter and the traveling salesman. Every modernized country needs to help keep things calm up there in near-Earth space. One obvious way to do so is by working together.

Consider the International Space Station (ISS), publicly proposed by former president Ronald Reagan in 1984 and launched in stages beginning in the late 1990s. Whirling around Earth about 400 kilometres above our heads at a velocity of eight kilometres per second, it is primarily a technological, physiological, psychological, sociological and agricultural trial run for human survival in deep space. Today’s ISS is a far cry from the weaponized, strictly national space platform imagined in the early 1950s by Wernher von Braun, the Third Reich’s rocket pioneer who metamorphosed postwar into a top U.S. space maven. Early Soviet ideas for a space station were similarly weaponized. Soon, though, more welcoming alternatives seemed preferable. Hence Mir, the USSR’s (and the world’s) first modular space station, whose name translates as “Peace” or “World” and whose core module was launched in 1986.

What Mr. Reagan proposed was an American-run platform for research, communications, peace, prosperity and freedom, with input from selected subordinates. It was not to be a partnership of equals. The final ISS is a collaboration among 15 countries, represented by the space agencies of Canada, the European Union, Japan and Russia, with the United States as official manager. (Note the absence of China, which, having resigned itself to being excluded, has embarked on the assemblage of its own modular space station, Tiangong, an undertaking that may well supersede the ISS in the 2020s as a venue for international endeavours.)

Presidents come and go. Plans fall through. Unforeseen competitors achieve breakthroughs. Further militarization of space creeps into outright weaponization of space. Whether to establish a U.S. Space Force or not is mostly a logistical, bureaucratic question; the deeper issue is America’s persistent official emphasis on dominance and primacy. As invoked by presidents John F. Kennedy and Lyndon B. Johnson during the 1960s space race, being “first in space” and gaining “control of space” may have sounded like attractive or even necessary goals. President George W. Bush’s belligerent secretary of defence proclaimed “space superiority” the goal.

Two decades into the 21st century, to reiterate the demand for U.S. dominance is to ignore reality. Sixty years after Sputnik, four dozen countries operate satellites, and more than a dozen have their own launch facilities. While the United States does the lion’s share of military space spending, the rest of the world does two-thirds of the space launches. But as we see almost daily, ignoring reality is a predilection of the current President and his enablers. 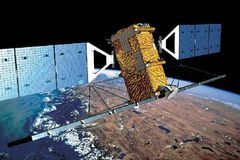 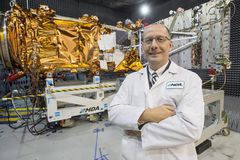 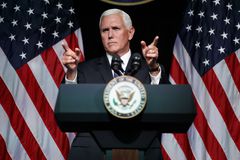