K.B. Thors is a poet and translator from Red Deer, Alberta.

Angered by the killing of George Floyd by Minneapolis police officers, people around the world have gathered to protest the anti-Black discrimination and racist violence they see in their communities. In Alberta, there were vigils in Calgary’s Olympic Plaza, demonstrations outside the provincial legislature in Edmonton, and solidarity events in smaller communities around the province. This is our right as Canadians: Free assembly and association on such public land is enshrined by the Charter.

Yet, amid such remarkable expressions of community spirit, Alberta’s legislature has just passed a bill that, if it receives royal assent and becomes law, could effectively make them illegal – a blatant attack on democratic rights that the Alberta Federation of Labour’s executive council has called a “step toward a police state.”

Bill 1, or the Critical Infrastructure Defence Act, aims to "protect essential infrastructure from damage or interference caused by blockades, protests or similar activities, which can cause significant public safety, social, economic and environmental consequences.” The phrasing is vague about what counts as “essential infrastructure” – that’s up to the provincial cabinet to decide, whether it be pipeline projects or highways or roads.

Under the terms of the bill, those exercising our constitutional rights could face hefty costs and jail time. The minimum fine for the offence of mere presence on public land is $1,000, with a maximum fine for a first offence at $10,000 and up to $25,000, as well as up to six months in prison, for subsequent “offences." So even as people protest against discriminatory laws, this sweeping legislation aims to codify discriminatory punishment in the name of “lawful” business.

The consequences of such actions can feel blunted right now, especially since governments around the world have effectively nixed public gatherings because of the pandemic. But Premier Jason Kenney’s UCP government introduced this bill months ago, when protesters blocked rail lines in solidarity with Wet’suwet’en hereditary elders, who opposed the Coastal GasLink pipeline being built across their traditional territories in British Columbia.

The effects of this law will also extend well beyond the medical crisis. Mr. Kenney has often criticized the federal government for overreaching with its gun legislation and carbon tax, but as NDP MLA for Calgary-Mountain View Kathleen Ganley put it, the removal of “peaceful gathering and communication among citizens was often a first step” in histories of government overreach.

Bill 1 affects Indigenous people in Alberta directly, even beyond the context of protests. As Ms. Ganley explained, “some people on First Nations tend to walk along the highway to get between point A and point B," and such activity could now be deemed illegal, as “highways” are listed among the infrastructure covered by the bill. This is beyond worrying, as Canadian law enforcement has a long history of subjecting Indigenous people to violence even when nothing unlawful has occurred. The bill risks trapping citizens in potentially life-altering or life-threatening situations that have proven ripe for exactly the kind of violence that current civic action is looking to end.

This kind of democracy-assailing legislation is not a one-off for this UCP government, either. In April, the Justice Centre for Constitutional Freedoms expressed concerns about Bill 10, which gives the government broad new powers, enabling any single government minister to create and enforce new laws without Legislative Assembly approval. The Alberta Medical Association, meanwhile, is suing the government for allegedly breaching Charter rights during the COVID-19 health crisis, asserting that it denied access to arbitration when it passed legislation that gives political leaders the power to unilaterally end worker deals. This flies in the face of the Supreme Court of Canada’s recognition that essential workers must either have the right to take job action or have access to a third-party arbitrator to settle disputes.

Bill 1 emerges at a crucial time for the UCP. According to June 3 polling by Research Co., Mr. Kenney has a disapproval rating of 56 per cent, the highest of any premier. After his Energy Minister’s comments that the pandemic is a “great time” to forge ahead on contested pipeline construction “because you can’t have protests of more than 15 people,” along with the suspension of environmental reporting requirements, it is easy to see what his government would have to gain from quashing dissent as confidence in his leadership wanes.

Canada’s court system remains a route by which the bill can be challenged if it becomes law, but that will take years. In the meantime, said Alberta Liberal Leader David Khan, it will put "a dangerous chill on Albertans’ rights to express themselves.”

Protests may be inconvenient and can sometimes cause damage to property, but inconvenience is the point of this enshrined right: The public needs a way to communicate to those responsible for representing us. Even at the best of times, it’s difficult for civilians – particularly Black people, Indigenous people and other people of colour – to be heard and seek justice under the law. Bill 1 saps that power, and exposes the Alberta government’s priorities: commerce over human life. Such a law would undermine peace in any country – and it’s happening right here, in Canada. 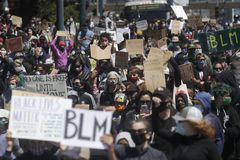 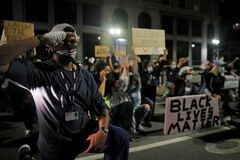 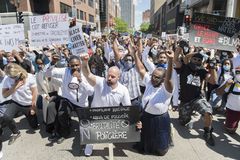