For the first time since the country descended into its Brexit adventure three years ago, parliamentary democracy returned to Britain on Tuesday night, and in force.

Brexit, until this month, had largely evaded the test of Britain’s democratic institutions. Prime Minister Theresa May had done everything in her power to prevent a parliamentary vote on her minority government’s plan to withdraw Britain from the European Union, and then to prevent MPs from setting the terms of that vote and the meaning of its outcome.

On Tuesday night, all of those efforts came to naught as the sovereignty of Parliament reared its head and Ms. May’s Brexit deal was defeated in the House of Commons by a staggering 432 votes to 202 – described by many observers as the largest parliamentary defeat any British government has faced in modern history.

The vote united a bizarre coalition of anti-Brexit and ultra-pro-Brexit MPs from all parties, including 118 of Ms. May’s 317 Tories, against legislation that would enact her 585-page withdrawal treaty, which was painstakingly negotiated over months with the other 27 EU member countries and would have allowed Britain to maintain a trading relationship with Europe after it officially leaves the bloc on March 29.

At least some part of this vote’s strength came from a mood of vengeance and frustration among MPs, who felt that two years of efforts to evade parliamentary oversight had all but neutered them, and their constituents, in the most important issue Britain has faced in this century.

And the resurgence of democratic debate was largely the work of John Bercow, the colourful Tory MP who serves as Speaker of the House, who repeatedly over the past several months has overridden Ms. May’s attempts to bypass MPs and impose the EU withdrawal without any parliamentary say.

Without his intervention, Brexit would have been a thoroughly un-democratic event from beginning to end. The EU withdrawal plan was Ms. May’s response to an advisory referendum in June, 2016, in which a narrow majority of Britons voted for a vague proposal to leave the EU. Referendums in Britain do not have any democratic value; they are effectively no more meaningful than any of the public-opinion surveys conducted by the government’s pollsters.

In March, 2017, Ms. May invoked Article 50 of the Treaty of the European Union, which allows states to end their membership with two years’ notice. Her intention was to avoid any parliamentary debate, but the High Court of Justice ruled, after a lawsuit brought by citizens, that such a fundamental constitutional matter required a vote in both Houses of Parliament.

Then, in July, 2017, Ms. May’s ministers declared that the parliamentary vote would take place only after Britain had legally withdrawn from the EU on March 29, 2019. Mr. Bercow stepped in, ordering Parliament to vote on an amendment that Tory MP Dominic Grieve proposed to the EU agreement legislation that required a “meaningful vote” of the House – the vote that took place on Tuesday night.

Mr. Bercow then allowed another amendment by MPs that forced Ms. May to propose an alternative Brexit proposal if her plan were defeated – thus preventing her from presenting it as an all-or-nothing scenario. Ms. May now has until Monday to present her plan, which could involve postponing the EU withdrawal or attempting more negotiations – something EU officials and member states have said will not be permitted. Throughout Tuesday’s tumultuous debate, Mr. Bercow intervened repeatedly to ensure that amendments allowing a wide range of possible outcomes were permitted, and those beyond the scope of British institutions were not. The result was the first really democratic decision on Britain’s EU membership since 2015.

What happens next is something of a mystery. Immediately after the vote, Labour Opposition Leader Jeremy Corbyn tabled a confidence vote, which will go forward on Wednesday night. It is unlikely Ms. May’s minority Tory government will be defeated, because there is no consensus around a replacement. Ms. May has managed to hang onto power since the 2017 election largely by avoiding parliamentary debate – last year, she cancelled her government’s Queen’s Speech (the British version of Canada’s Speech from the Throne), as it would be subject to debate that could cause her government to fall.

While it is unlikely that Tuesday’s huge defeat will immediately bring down her government, for the first time since 2016, it is possible Brexit could be postponed, cancelled or subjected to a second referendum – outcomes that more closely reflect the democratic will.

On the other hand, it is now far more likely than before that Britain could crash out of the EU on March 29, without any trade or economic relations with its neighbours – a possibility that has led to hoarding of food and supplies. While the MPs now have more power than ever to prevent that outcome, they must wait for Ms. May to throw the ball back into their court. 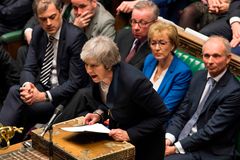 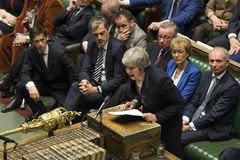 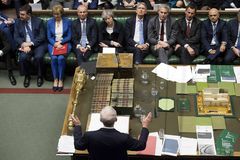