Angela Merkel never gives televised speeches to the German people, except for her yearly New Year’s addresses. So Germans knew something was up when their chancellor appeared on their screens on Wednesday night, the majestic glass dome of the Reichstag visible over her shoulder.

Of course, they already knew something was up: Just a few days earlier, she had told the country, with shocking forthrightness, that up to 70 per cent of its citizens may contract coronavirus. She’d then closed the bars and clubs and cinemas and museums, to fight the spread of the virus. She had ordered schools closed, as well as playgrounds, and “brothels and similar.” (As a recent resident in Germany, I have no idea what the “similar” entails, but I can imagine.)

In her trademark phlegmatic style, Ms. Merkel gave it to the country straight, telling the television audience that Germany had faced no greater challenge since the end of the Second World War, and that only joint action and adherence to orders would slow the spread of the disease. She told people to disregard rumours. She thanked shelf-stockers and cashiers, surely a first for a political leader’s major speech, and gently admonished Germans for “hamstern,” or panic buying (think of a hamster stuffing its cheeks with food). The practice was “unsolidarisch,” and what was going to save Germany was its opposite – togetherness.

To modernize an old saying: Comes the day, comes the woman. While her critics are likely still grumbling that the Chancellor’s reaction to the crisis was too cautious and slow, it’s clear that a good proportion of Germans breathed a sigh of relief that Ms. Merkel is still in charge, 15 years after she first became leader. Especially when they look across Europe to the buffoonery of British Prime Minister Boris Johnson and across the Atlantic to the bluster of U.S. President Donald Trump. She is on her way out, having said she won’t run again next year. So she’s a lame duck, but not roasted yet.

Ms. Merkel’s middle way of confronting the pandemic, somewhere between the anarchy of the British response and the full lockdown of France and Italy, has drawn criticism. She should have acted swiftly to shut down all non-essential stores and services, and ordered people to stay inside, according to armchair critics and political foes.

But her more moderate response – which could easily change in the next couple of days – springs from Ms. Merkel’s unique history and life experience. For one thing, she’s a scientist, having studied physics and obtained a doctorate in quantum chemistry. In a 2014 New Yorker profile, a government official described her decision-making style: “She looks at various vectors, extrapolates, and says, ‘This is where I think it’s going.’ ”

Ms. Merkel examines problems with a scientist’s cool and judicious eye. But having grown up in repressive East Germany, she’s also loath to rein in anyone’s freedom. She said as much in her television speech: “For someone like me, for whom the freedom of travel and the freedom of movement were a hard-fought right, such restrictions can only be justified if they are absolutely imperative. These should never be put in place lightly in a democracy and should only be temporary.”

It is a balancing act, and one that she’s managing to pull off at the moment. As Die Zeit newspaper announced this week, “the crisis chancellor is back.” That is, the person who acted decisively (if controversially) during the financial crisis of 2008 and the refugee influx seven years later. More recently, as she prepared to move aside for her chosen successor, Annegret Kramp-Karrenbauer, Ms. Merkel has seemed less decisive, her foot-dragging caution coming across as timidity. For one thing, her long-awaited green plan to move Germany to a clean-energy future, finally unveiled last fall, was widely slammed as too little, too late. She’s also been criticized for failing to deal with the far-right threat flaming across Germany, whether it’s extremists in the army or racist killers in Hanau and Halle.

The pandemic arrives at a politically fraught moment for the Chancellor. She has to try to co-ordinate the responses of Germany’s states, in which much power is vested, like Canadian provinces. Her party, the Christian Democratic Union, is tanking in state elections, and it needs a new leader, since Ms. Kramp-Karrenbauer resigned after a scandal involving local CDU politicians allying themselves with the far-right AfD. One of the likeliest contenders for the party leadership, Friedrich Merz, announced this week that he’d tested positive for coronavirus.

This moment is going to cement Ms. Merkel’s reputation, one way or another. Her government has moved boldly to protect an economy that was already teetering on the brink of recession. There is a plan to inject as much as €50-billion (around $77-billion) into the economy to protect businesses and workers (who are already being safeguarded through the kurzarbeit program that trims their hours while keeping them on the payroll). The Finance Minister, Olaf Scholz, has talked about aiming a money bazooka at the problem – even if that trashes Germany’s cherished commitment to balanced budgets.

It seems hard to believe that only a few short months ago, the country was celebrating 30 peaceful years since reunification, and Ms. Merkel was giving interviews about her early dreams of one day leaving East Germany to drive across the United States, listening to Bruce Springsteen. That was only November, but it seems about 500 years ago. Now, Ms. Merkel needs to face down one final challenge before she can wave goodbye. It’s comforting to know that, at least for now, there’s still an adult in charge. 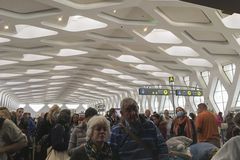 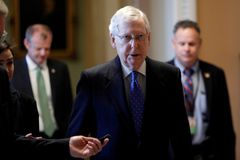