From the reliably rancorous Trump administration, there’s so much daily dross – how about the President being called God’s “chosen one” by his goofy energy secretary Rick Perry? – that big things tend to get small notice.

Outside the clamour of the capital, priorities for Americans haven’t changed. They are peace and prosperity. That Donald Trump scores favourably on both counts bodes badly for Democratic Party prospects.

For Oval Office incumbents, electoral history shows that they are a winning combo. Dwight Eisenhower had the big two going for him in 1956. His campaign slogan was “peace and prosperity” and he won handily over the intellectual bore, Adlai Stevenson.

It was the same for Ronald Reagan, when he smashingly recaptured the seals of office in 1984. For the Democrats, Bill Clinton had the country at peace and prosperous in 1996, when he won a second term. Barack Obama was getting the country moving again and downscaling military commitments, when he defeated the quintessential elitist Mitt Romney in 2012.

Presidents who lost re-election bids – Herbert Hoover, Jimmy Carter, George H.W. Bush – were doing poorly on one or both indices.

Given that Mr. Trump is a tradition breaker nonpareil, the shameless shatterer of all norms, precedent needs to be taken with a great grain of salt. But as a Gallup poll in September demonstrated, Americans like what he is doing on the big two. Republicans had a four-point lead as the party of prosperity and a six point advantage on peace and security.

Trumpian malfeasance and buffoonery are not taking the anticipated toll. Every time things appear to have reached the tipping point, they don’t tip. Even the impeachment proceedings are not moving the yardsticks. Some polls even show an uptick for Mr. Trump.

Ethics are important. More important is that the President presides over one of the best-performing economies in the country’s history; that and his avoidance, unlike so many trigger-happy presidents, of major military conflict.

A warring chief executive Mr. Trump is not. “Great nations do not fight endless wars,” he says. “The United States cannot continue to be the policeman of the world.” In putting a finer point on it, he added: “We are in countries most people haven’t even heard about. Frankly, it’s ridiculous.”

He is fond of threats and sabre-rattling, but usually backs away. In June, after being “cocked and loaded,” Mr. Trump called off an air strike on Iran because he was told it might kill as many as 150 civilians.

Americans appreciate that he has tightened border security, disposed of Islamic State leader Abu Bakr al-Baghdadi and got NATO allies to pay more of the freight for collective security.

All’s not to say it’s an inspired or coherent foreign policy. Rather, it’s impulsive risk-heavy individualism, a jumble of ad hockery that has rocked the liberal international order.

Results don’t match Mr. Trump’s rhetoric. His withdrawal of 1,000 troops from northern Syria created chaos. His promised major Afghan troop withdrawal hasn’t happened. There’s no deal with North Korea, no progress on peace in the Middle East. He’s held hands with dictators, withdrawn the U.S. from international accords and, as Republican leaders are wont do, opted for a deficit-ballooning increase in military spending on gossamer grounds.

But the non-interventionism – less warring under him than any other Republican president of the past half century – aligns with the mood of the country.

The bigger advantage for Mr. Trump is on prosperity. How many presidents have combined record-high stock-market gains (Dow Jones Industrial Average) with near-record unemployment lows? That and gross domestic product growth between 2 per cent and 3 per cent, decent wage growth, low inflation and scant interest rates?

Rapidly rising debt, low investment and income inequality are serious concerns. Much of his success is because of the luck of timing, his catching the economic cycle at a most opportune time. But the prosperity is a pronounced advantage to have in an election year.

Democrats aren't going to win the election on the economy or national security issues. As for the unrelieved perfidy of this administration, what polls suggest is that the public has factored this in to its evaluation long ago.

Democrats should have clued in by now that there’s not much more blood to be drawn from this President on the matter of his character. The dilemma for them is that with peace and prosperity in his quiver, what else have they got? 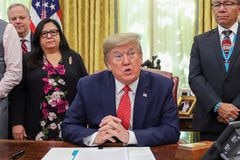 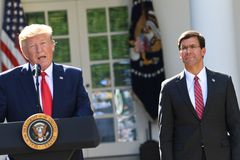 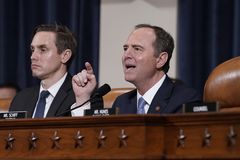