Andrew Cohen is a journalist, professor and author of Two Days in June: John F. Kennedy and the 48 Hours That Made History.

As the field vying to lead the Democratic Party narrows, it ages. With the two remaining serious candidates in their late 70s, this will be the oldest presidential race in modern American history.

The circle of septuagenarians ensures that if the next president is a Democrat, he will be the oldest ever to take the oath of office. The unprecedented age of the commander-in-chief will scramble conventional expectations of physical stamina, mental acuity and life expectancy. This is America’s senior moment.

If Super Tuesday is a trend, the most likely candidate to face Donald Trump is Joe Biden, 77, known for his lapses and gaffes. (Earlier this week, trying to quote the U.S. Constitution, Mr. Biden stumbled over some words and said “you know, the thing.”)

This in itself is a sea change. Until the late 20th century, the office was belittled, a consolation prize. Friends were shocked when Lyndon Johnson, the “Master of the Senate,” agreed to run with JFK in 1960. Nelson Rockefeller called the job “standby equipment” long before he took it under Gerald Ford. John Nance Garner, FDR’s unhappy No. 2 for two terms, said the office wasn’t “worth a bucket of warm spit.” Satirist Tom Lehrer sang of LBJ’s diminished vice-president, Hubert Humphrey: “What ever became of Hubert?”

That has changed as presidents have shared duties with their vice-presidents over the last quarter-century. As the cliché says, he or she is only a heartbeat away from the presidency. That didn’t matter much when the president was young and healthy. But what if the president is old with a troublesome heart, such as Bernie Sanders?

Actuarially, the chances of the next president dying in office are higher for Mr. Sanders (78) and Mr. Biden than they are for Elizabeth Warren (70), Amy Klobuchar (59), Kamala Harris (55) and Pete Buttigieg (38), all of whom are now vice-presidential prospects.

Donald Trump, for his part, is 73. He and his challengers will be almost a year older on Inauguration Day next January.

Expect the choice of running mate to become an issue among Democrats as the race moves to their convention in July. It increasingly makes sense for the candidates to announce their running mates before the convention, as Republican Ronald Reagan did in 1976.

First, an announcement will make a splash, giving voters a sense of who may well be president imminently beyond the top of the ticket. It is an early measure of a candidate’s judgment.

Second, it will establish a balance of sex, race, ethnicity, ideology and geography on the ticket. As the Democrat will be a man, he will probably want to run with a woman. Both will consider someone who is a visible minority – African-American or Hispanic.

They may consider choosing a Midwesterner to help re-claim Wisconsin, Michigan and Pennsylvania, which went Republican in 2016. Philosophically, a moderate nominee might want a progressive running mate, with the reverse for a progressive nominee. A younger running mate brings youth, glamour and vigour to the ticket.

Third, choosing a running mate will ensure a division of labour. A presidential campaign is a marathon, and these folks are old. For Mr. Biden, markedly unsteady, a running mate would offer relief from an enervating campaign and share his unrelenting scrutiny.

This is why he should ask Sen. Harris of California to run with him now. She is of mixed race, a fierce competitor and a former prosecutor. Mr. Sanders might name Ms. Klobuchar, though she has endorsed Mr. Biden and may be too moderate for him.

The vice-presidency this time will be quite a prize. Given the prospect of the president dying or retiring early, it is a more likely stepping stone to the White House, as the office has been for 14 of 45 presidents. There’s a good chance of succeeding the boss.

The next vice-president may well come to power on the death of the president, caused by illness. This was the story of John Tyler, Millard Fillmore, Calvin Coolidge and Harry Truman. Or it might be that he or she is elected, like John Adams, Thomas Jefferson, Martin Van Buren, Richard Nixon (eventually) and George H.W. Bush.

Here’s the deal, as Mr. Biden says: Given the advanced age of the next president, your successor won’t necessarily have to wait two terms. These prospective presidents are so old that none may serve longer than four years. To admit that now would make them a lame duck, but the possibility is deadly serious.

With the average lifespan of Americans is in the mid-to-upper seventies, either one of the two remaining Democrats will be in that zone in his first term. So will Mr. Trump, if he is re-elected, in his second term.

This is the reality of America’s new gerontocracy in 2020. The once-scorned, much-maligned vice-presidency has never looked so good. 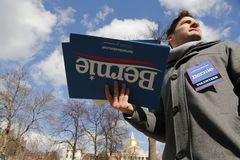 Resurgent Biden aims to stop Sanders as Buttigieg bows out ahead of Super Tuesday
March 2, 2020 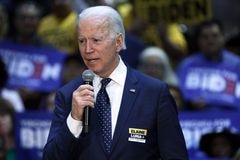 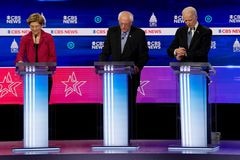