What is it about Catherine McKenna that brings out the worst in her critics?

On a certain level, it’s understandable why the federal Environment Minister, who now requires a security detail on certain public outings, has become a lightning rod for those who feel threatened by measures aimed at reducing greenhouse gases. And it’s not just because the federal carbon tax, applied in provinces that have not put a price on carbon, will increase the cost of filling up at the gas pump or reduce the competitiveness of the industry they work in.

Ms. McKenna is the chief climate advocate of a government that is forcing change on Canadians. There is bound to be resistance, especially among folks who feel there is nothing wrong with their current lifestyle or livelihood. Who is Ms. McKenna to tell them otherwise?

But get a grip, people. Ms. McKenna is only doing her job. And if you don’t like it, there are more adult ways to show it than shouting insults and expletives at her when she takes her children to a movie. Such demonstrations of boorishness always reveal more about their perpetrators than their targets.

You can argue, without condoning it, that the Liberals have invited this anger upon themselves. They have turned climate change into a wedge issue to unite the left against the Conservatives.

The Conservatives, in turn, have decided to make repealing the carbon tax a central part of their platform in the federal election campaign. Indeed, both parties have decided it is in their interest to portray the other as radically outside the mainstream on the climate file.

The truth is that what looks like political polarization is mostly political theatre. The Liberal climate plan is hardly a radical one. And it could even improve the saleability of Canada’s oil sands, which will remain a critical source of national wealth as the country and planet transition to a lower-carbon future. The Liberals have conceded as much by approving the Trans Mountain pipeline expansion, which Liberal Leader Justin Trudeau insists is in the national interest.

Federal Conservative Leader Andrew Scheer, hopelessly overshadowed by Mr. Kenney and Mr. Ford, had little choice but to jump on board. In addition to abolishing the federal carbon tax, Mr. Scheer would scrap the Liberal plan to impose a clean fuel standard, which would require refiners to lower the carbon intensity of gasoline by mixing it with more biofuels.

Unfortunately, the Conservatives appear to have painted themselves into a corner on the carbon tax, which economists agree is the most efficient way to reduce emissions. So, there is less likelihood that Mr. Scheer would be able to pull a Jean Chrétien, who campaigned in 1993 on abolishing the goods-and-services tax, but abandoned the idea in office.

Still, the Conservative climate plan presented by Mr. Scheer in June is nevertheless a serious one. It would replace the Liberals’ output-based pricing system for industry, which would require large emitters to pay a levy on only a small percentage of their carbon emissions. Instead, the Conservatives would introduce caps on industries’ greenhouse gas emissions and require companies to invest in technologies aimed at reducing their emissions.

For his plan to pass the credibility sniff test, however, Mr. Scheer needs to specify during the campaign not only the precise level of carbon caps industries would face, but also what penalties would be imposed on those whose emissions exceed their cap. Only then would it be possible to determine whether the Conservative plan measures up to its billing.

For his part, Mr. Trudeau needs to come clean on whether a Liberal government would increase the carbon tax beyond the $50-a-tonne level it is set to reach in 2022, provided the Supreme Court of Canada rejects provincial challenges to the constitutionality of the carbon levy.

But policy specifics alone won’t be enough. Mr. Scheer and Mr. Trudeau need to set an example in civility. It’s easy to ramp up the rhetoric on climate change. It becomes much harder to govern as a result. 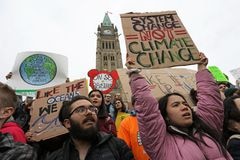