“It is the dawn of a new era,” Prime Minister Shinzo Abe declared last month. He was referring not just to the pending abdication of Japan’s head of state, Emperor Akihito, but to the sudden and dramatic change Japan has experienced in its approach to immigrants and ethnic minorities.

While the Western world has been fighting about building walls, Japan and its East Asian neighbours have been opening their gates.

Japan has long considered itself the ultimate uni-ethnic society, one that has all but forbidden immigration for the better part of 1,200 years. Not any more. For the first time, polls show that a majority of Japanese consider that tradition damaging rather than beneficial, and consider immigrants desirable.

It was Akihito himself, at the end of December, who used his final birthday speech to call for a new pluralism – with a pointed reminder of the struggles Japanese have faced in places like Canada.

“Bearing in mind that people of Japanese ancestry are living as active members of society with the help of the people of their respective countries,” he declared. “I hope that the Japanese people will be able to warmly welcome as members of our society those who come to Japan to work here.”

This was no empty platitude. In November, Japan passed its first real immigration law, allowing more than 345,000 foreigners to settle over the next five years, adding to the almost 3 million who already live there. A few months earlier, another law made it easier for skilled immigrants to become full Japanese citizens, often within one year.

And Mr. Abe, to the surprise of many in his conservative party, declared that Japan should break from its ethnically homogenous past with something resembling multiculturalism: “It would be wrong to force our values on foreigners,” Mr. Abe said. “Instead, it’s important to create an environment in which people can happily co-exist.”

These developments all feel like something of a vindication for the official who has spent the last 20 years warning anyone who will listen that their country will be in trouble if it doesn’t accept at least 10 million immigrants in the next few decades.

“I do feel that in Japan, people have to change – the Japanese themselves must change. And it’s beginning to happen,” Hidenori Sakanaka, the former head of Tokyo’s immigration bureau and head of an influential demographic think tank, told me when we met last week during his visit to Canada. “More and more Japanese are having the opportunity to see foreigners up close and engage with them, have interactions with them – so I think people are starting to grow a bit more.”

Japan remains an enormously prosperous and successful country. But it has become all too apparent that it will not be able to carry on with a declining population, which is shrinking by 300,000 people per year; without immigration, it will drop by 40 million (from 126 million) by mid-century. As my colleague John Ibbitson and co-author Darrell Bricker illustrate in their new book Empty Planet: The Shock of Global Population Decline, this is a crisis of the fortunate: Only well-off places see family sizes decline. But it has consequences. A declining consumer market means a continual fall in the price of many things, including housing – which means people no longer want to invest in them or improve them.

Unemployment is below the rate considered “zero,” and many parts of Japan have a complete absence of workers available to harvest crops, staff hotels and – crucially – care for the elderly. The number of bankruptcies caused by staffing shortages doubled between 2016 and 2017.

“With the population declining and the low birth rate, many of our key companies and industries are kind of bottoming out, because there’s a total lack of human resources," Mr. Sakanaka told me.

Even the conservative Mr. Abe has come around to Mr. Sakanaka’s views because, frankly, Japan has tried everything else. The Prime Minister’s party pushed for what he calls “womenomics,” and succeeded in bringing 2 million more women into the workforce. Another 2 million people were added through policies that allowed people to work beyond 65 while still collecting their pensions.

So the idea of adding millions more Japanese people – who don’t necessarily have Japanese names or faces – has become a majority view, albeit a hotly contested one. When Japanese citizen Naomi Osaka became the world’s top-seeded female tennis player last month, for instance, some fellow Japanese saw her part-Haitian features, her strong accent and her multiple nationalities as reasons to question her identity. But others recognized her as the new face of their country.

Japan, the veteran diplomat Kuni Miyake wrote after her Australian Open victory, “is rapidly becoming a multiracial and multicultural society – something nobody had imagined would happen. In the coming decade or two, we will have millions of people like Osaka who will enrich and evolve the Japanese nation.” 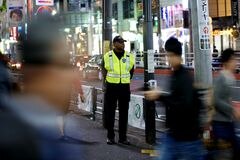