At the start of the year, Mitt Romney bared his knuckles and voted to impeach Donald Trump, becoming the first senator in the republic’s history to vote to remove a president of his own party.

This week, however, Mitt put on his mittens. The Utah senator said he would side with the President – the one he had wanted guillotined – in appointing a new Supreme Court justice to replace the late Ruth Bader Ginsburg, instead of allowing the election result to determine which party should have the right.

The easy yielding of perfidious Republicans such as Mr. Romney and Lindsey Graham, who tore up his vow that new justices should not be appointed in an election year, all but assures the ascent of another core conservative to the court. The new nominee will be the third justice Mr. Trump has installed at the top court in the land, giving conservatives an overwhelming two to one (6-3) advantage over the Democrats' nominees in the government’s judicial branch.

Given the immense power of the court, Democrats might well be asking whether this election is even worth winning. On many of the major issues of the day, such as health care, abortion rights, immigration, LGBTQ rights, voting rights, union power and civil rights, the Republicans will still wield much of the power. As Mr. Trump declared at a rally in Pennsylvania Tuesday, the Supreme Court justices “will set policy for 50 years.”

That outcome can be prevented, however, if Democratic presidential nominee Joe Biden responds in kind to the Mephistophelean tactics of his shameless opponents. What the Trump Republicans are essentially doing is court-packing, and many are advocating that Democrats should respond with a court-packing plan of their own by vowing if elected to increase the size of the court by adding four liberally inclined justices.

The constitution does not forbid such court-packing or, more precisely, court-stacking. The court’s size has been changed through legislation over time. To be sure, however, it would be a cynical power grab – but it wouldn’t be so egregious if the Democrats campaigned on the policy and, if they won the election, earned a mandate to enact it.

For Mr. Biden, however, such a move would be an act of abject hypocrisy on his part, because he’d previously stated that the court should not be turned into a political football. Just last year, he said “we’ll live to rue that day” if the court was expanded, saying it would Iead to round after round of expansion, with Republicans doing the same as Democrats. The court would “lose all credibility.” In utter contrast to Mr. Trump, Mr. Biden has nurtured a reputation for respecting institutions.

Democrats calling for him to shed his holier-than-thou nimbus point to what happened in 2016, when Republican Senate leader Mitch McConnell blocked Barack Obama from appointing Merrick Garland to the court, asserting that in an election year, the people should be left to decide. Now, Mr. McConnell has reversed himself, saying it’s okay to do so this year because, as opposed to 2016, the governing party now controls the Senate.

Mr. Graham, the Senate’s judiciary committee chairman, has done the same, only in more blatant fashion. In 2016, the oleaginous senator went so far as to tell voters that he wanted them to “use my words against me,” should he not hold to his vow that justices shouldn’t be appointed in an election year. Brazenly, Mr. Graham is now refuting them. He even had the gall to send out a fundraising appeal on Tuesday, bellyaching about protesters who “screamed, blared horns and pounded on the front door of my house in Washington.” As if he didn’t have it coming.

Republicans still retain control of the Senate, and they have an even-money chance of maintaining that control on Nov. 3. That would mean that in both legislative and judicial branches, they would potentially retain a great deal of strength, thus emphatically diminishing the scope of a Biden victory should one happen.

The Democrats, though, could play hardball on the Senate as well. They could commit in the campaign to granting statehood to the heavily liberal District of Columbia and Puerto Rico, ensuring them four more senate seats in future elections.

Mr. Biden doesn’t wish to reduce himself to the level of a Mitch McConnell. But as Senate Minority Leader Chuck Schumer said on Tuesday, “We can’t have business as usual when Republicans are destroying the institutions, as they have done.”

Turning the other cheek sounds nice in the scriptures. But when confronted by the sordid scheming of the Trump Republicans, it would be a ruinous course for Mr. Biden to follow. 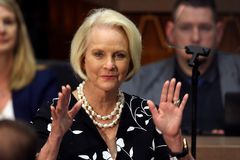 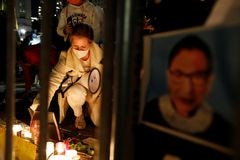 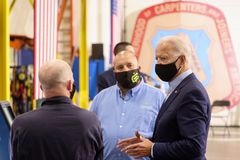