Until now, the tumult in Donald Trump’s Washington has been limited to one crisis at a time – the effort to eliminate Obamacare; the dismissal of a single top official; a contretemps over the President’s comportment. But with astonishing suddenness this week, the crises have multiplied.

Now Mr. Trump has challenges on two continents and within two branches of the American government. He finds himself at once on the offensive (against Syria and the Assad regime’s protector, Russia) and on the defensive (on the Robert Mueller investigation and on Capitol Hill).

The confluence of these challenges is not entirely coincidental. The crisis in Syria has its own momentum, to be sure, but it was fuelled by a bombastic Wednesday morning Trump tweet (‘’get ready Russia’’) that has no precedent in American diplomatic history and that stood as just the sort of unrestrained presidential action that has repeatedly unsettled House Speaker Paul Ryan, the very model of deliberate, sober and conventional comportment.

Hours later, Mr. Ryan, once the beau ideal of the new conservatism and the great unifying hope of Republicans of virtually all stripes, announced that he would not seek re-election, setting off a panic among party members worried about continued GOP control of the House, perhaps nudging other disquieted or disaffected Republicans to the door, and spawning just the sort of leadership succession battle an otherwise fractured GOP House coalition neither wanted nor needed.

Mr. Trump began Wednesday with a morning social-media onslaught that taunted both the leaders of Russia and Syria, themselves deeply unconventional figures. Over Twitter, Mr. Trump, who earlier had goaded North Korea’s Kim Jong-un over the size of his (metaphorical) nuclear button, told Russian President Vladimir Putin that the American missiles he said were Syria-bound were ‘’nice and new and ‘smart!‘’ He added that Russia ’’shouldn’t be partners with a Gas Killing Animal who kills his people and enjoys it!”

The characterization of Syrian President Bashar al-Assad may have struck some in North America and around the world as refreshingly accurate; it jibed, for example, with the assessment of GOP Senator Lindsey Graham of South Carolina, an important voice on foreign affairs, who Monday described Mr. Assad as a ‘’legitimate war criminal.’’ But the Trump remarks were a dramatic departure from customary White House diplomatic language, even when addressed to tyrants.

It’s also the kind of advance warning that drew Mr. Trump’s criticism when it was performed by his predecessor. In 2013, when president Barack Obama announced a chemical-weapons “red line” that would trigger U.S. military action in Syria, Mr. Trump tweeted: “Why do we keep broadcasting when we are going to attack Syria. Why can’t we just be quiet and, if we attack at all, catch them by surprise?”

Besides the tumult in Syria and on Capitol Hill, Mr. Trump faces fresh challenges from Mr. Mueller, the special prosecutor, in the wake of the seizure of documents from the office of the President’s lawyer. The President, dissuaded from firing Mr. Mueller earlier, again is considering dismissing Mr. Mueller or his boss, Deputy Attorney-General Rod Rosenstein.

Such an action would create the sort of Washington firestorm the capital has not witnessed since Richard Nixon, in an episode known as the Saturday Night Massacre, ordered the firing of Watergate independent special prosecutor Archibald Cox. In 1973, attorney-general Elliot Richardson and deputy attorney-general William Ruckelshaus resigned rather that carry out that order.

The result of that action, perhaps presaging the result of any similar decision by Mr. Trump, only deepened Mr. Nixon’s White House crisis. He resigned about nine months later, the only American president to leave office voluntarily in the middle of his term.

Even so, Mr. Trump is deeply aggrieved with the Mueller investigation and with the support that Mr. Rosenstein, who approved the raid on the Trump attorney’s office, has provided the special prosecutor he appointed 11 months ago. Just this week, in an e-mail titled ‘’witch hunt,’’ Mr. Trump set forth to his supporters the argument he might employ in such an eventuality:

‘’Let me be clear. Since Day One, this witch hunt has never been about me. Their target is you. The swamp doesn’t want you to take your country back, and they will fight to the bitter end to stop you.’’

In this regard, ‘’the swamp”− Mr. Trump’s shorthand for entrenched Washington power centres and elites in the press and universities − is personified by Mr. Mueller, who has an Ivy League education and served as director of the FBI during the George W. Bush and Barack Obama administrations.

Indeed, Mr. Trump squared the circle of his multiple challenges with a mid-morning tweet Wednesday:

‘’Much of the bad blood with Russia is caused by the Fake & Corrupt Russia Investigation, headed up by the all Democrat loyalists, or people that worked for Obama. Mueller is most conflicted of all (except Rosenstein who signed FISA & Comey letter). No Collusion, so they go crazy!’’

Mr. Mueller is a lifelong Republican. Moreover, the departure of Mr. Ryan from the House speakership −at a time when the party fears a Democratic ‘’blue wave’’ in the midterm elections − is a reflection of the tensions spawned by Mr. Trump within the Republican Party.

These tensions, and the departure of the Speaker, are watched with fascination and mystery − and by an unusual sense of regret — by Democrats on Capitol Hill.

‘’Ryan’s decision could be something involving the politics or maybe it’s just that he’s seeing a different path for his life,’’ Democratic Senator Robert Casey of Pennsylvania, himself a candidate for re-election in a state that Mr. Trump carried, said in an interview.

“But it could have the effect of spurring more challenge of the culture around here and also challenging the President. Ryan may be unburdened and may be able to speak more directly than he had before. We are going to need Republicans to stand up if Mueller or Rosenstein were fired and to stand up on the ultimate Russia report when that is released,’’ he added. 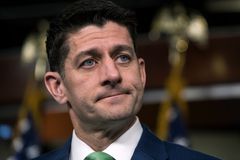 Explainer
After air strikes, what happens now in Syria? What we know so far
April 19, 2018 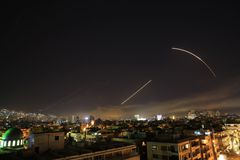