David Shribman
Pittsburgh
Special to The Globe and Mail
Published May 5, 2021 Updated May 5, 2021
Comments
Text Size

David Shribman is the former executive editor of the Pittsburgh Post-Gazette and the winner of a Pulitzer Prize for his coverage of U.S. politics. He also led the Post-Gazette’s Pulitzer-winning coverage of the Tree of Life mass shooting.

The signs of springtime renewal are everywhere in our neighbourhood. The massive trees that loom above our house have donned a fresh green chemise; the gardens smell of mulch; our porch is dusted with the yellow baby powder of pollen. And just three blocks away, down the street and around the corner, stands the saddest spot in our corner of the city, the one most in need of renewal.

Renewal – and reflection and remembrance.

For more than two years, the Tree of Life - Or L’Simcha synagogue – the site of the most deadly antisemitic crime in U.S. history – has stood, tomb-like, at the corner of Wilkins and Shady avenues. In October 2018 it became a crime scene when 11 Jews were massacred there, at prayer; today, it is on the verge of becoming a setting of urban blight surrounded by a chain-link fence, with reproductions of children’s drawings, many of them from the pupils at Stoneman Douglas High School in Florida – another scene of mass murder – now fading.

But this week came the news that a son of Holocaust survivors with a genius for rendering scenes of trauma into venues of healing will transform the structure into a symbol of renewal. Services will be held again, conferences about hatred will be convened and the Holocaust Center of Pittsburgh will install interactive exhibits.

The hurt will remain, to be sure. To this day, posters decrying intolerance occupy the storefronts of the Dollar Bank and Uncle Sam’s Gourmet Subs in the centre of the Squirrel Hill neighbourhood, itself the centre of Jewish life here. Immediately those signs sprung up on the windows of pizza shops and were buckled by the steam of the dry cleaners over the months – the placards proclaiming some version of “No Home for Hate” well before the phrase appeared on yard signs planted in front of homes across the country.

The hope – the fervent belief – is that architect Daniel Libeskind, born in a homeless shelter in Lodz, Poland, and who designed Berlin’s Jewish Museum and was the master planner for the World Trade Centre commemorative site after the 2001 terror attacks, will give new life to a setting where 11 lives were lost. The precise place where the attacks were carried out will be demolished, though a memorial to the victims is planned. The large building – it resembles nothing so much as an Iron Duke-class First World War battleship grounded incongruously on a busy city corner – will remain, and the stained-glass windows will be preserved.

It wasn’t only the families of those killed – nor of the six people, including police officers, who were injured in the melee – who were plunged into remorseless sadness that terrible Saturday morning. It was all of Squirrel Hill, where the time is measured on a clock tower with Hebrew letters, where the nearby Dunkin’ Donuts has been certified kosher by a rabbinic agency, and where a white Star of David placed inside a big heart has been painted on the Starbucks. Here, a controversy brews about how many synagogues there are within a square mile of the community library. Some argue there are 11, others insist it is 12. Who knows? Maybe it’s only 10. Talmudic-like disputes have been spawned over questions of less consequence.

Then the grief washed over all of Pittsburgh, one of the few American cities where Jewish life did not migrate to the suburbs. The iconic Steelers football logo was revised on T-shirts, with a Star of David replacing one of the hypocycloid stars and bearing the legend “Stronger Than Hate,” which also appears on a modified Penguins hockey logo, because here we are what we wear, and whom we root for.

Mr. Libeskind’s project will end community debate over the future of the site, which actually is home to three separate congregations. The plan, according to the synagogue’s executive director Barb Feige, is to “transfer this site that has been one of tragedy into one of hope.” Ms. Feige is the classic Pittsburgher of her time: the child of two Holocaust survivors, a member of an Orthodox synagogue leading a Conservative congregation, and a graduate of a Catholic college.

On Tuesday, I passed Tree of Life, just as I have pretty much every day on my neighbourhood walk. Even in the high humidity of a 23-degree spring morning, I still felt a chill. Sadly, the artistry of Mr. Libeskind will not be able to erase that. The synagogue will open again – but here in Pittsburgh, there is no closure. 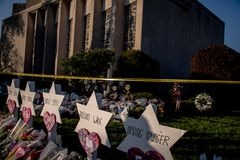 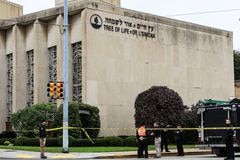 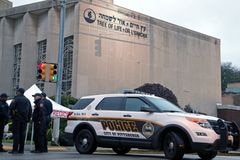