Gideon Forman is a transportation policy analyst at the David Suzuki Foundation.

For 40 years I’ve been reading the literary works of Samuel Beckett. But until recently, I hadn’t noticed his contribution to transportation policy.

This spring I picked up for the first time his novel Molloy, written in French in 1947. The title character is a kind of brilliant homeless philosopher whose quest is to reunite with his elderly mother. The circumstances of the adventure are far from clear. But I was struck by the fact this gentleman, who is disabled, pursues his journey by means of a bicycle.

Perhaps for Mr. Beckett, the bike telegraphs destitution. Too poor to purchase an automobile or even pay train or bus fare, Molloy is forced to cycle. Its creative purpose might be comedic: Here is a man with leg problems so severe he requires crutches managing, nevertheless, to ride a two-wheeler: “Crippled though I was, I was no mean cyclist …”

For a sustainable transportation advocate such as myself, the bike is something different. It demonstrates, in its owner, ecological enlightenment. It’s a climate-change solution, promoter of healthy air; an instrument of urban decongestion.

But can we discover, in Mr. Beckett, other reasons to embrace this mode of transport?

Molloy shows the bicycle is accessible to nearly everyone, even the dispossessed. Its only fuel is will and human energy. In many places it can be operated without fees or a licence. It democratizes movement.

It offers companionship, which makes it compelling in our age of loneliness. It holds us up – literally, of course, but also metaphorically. Near the story’s opening, Molloy walks his bike along a narrow street, noting the hardship of “advancing on my crutches pushing my bicycle at the same time.” But after he has completed his task, he says, “Thus we cleared these difficult straits, my bicycle and I, together.” Like a beloved dog or cat, a bicycle is there for us.

It also brings joy. Unable to find it at one point, the protagonist is bereft. Reunited, he remarks, “It is a pleasure to meet it again.” He addresses it as, “Dear bicycle.” He says it has a red horn and adds, “To blow this horn was for me a real pleasure, almost a vice.”

For the indigent – but not only them – the two-wheeler is a means of escape. After an unhappy encounter with a stranger during which his possessions are taken, Molloy observes, “As for the bicycle, I had hopes that it was waiting for me … ready to carry me away from these horrible scenes.” I know activists who take bikes to demonstrations to make a swift exit if the situation requires.

Cycling teaches us to be alive to what’s in front of us – the demands of living compassionately now – and not immersed in abstraction. When he gets lost in thought while riding, Molloy falls off or, worse, injures others. At one point, he’s unsure of his location and plans to ask a stranger what town he’s in: “I had hardly perfected my plan, in my head, when my bicycle ran over a dog …” He kills the animal because he’s preoccupied with planning – which plunges him into the future – rather than caring about a creature immediately before him. Mr. Beckett is no friend of theory or ideology. The bike reminds us to engage, with empathy and concern, in the world right here.

Across his canon, Mr. Beckett’s characters are steeped in uncertainty. They fail to know where they are or where they’re headed. Molloy is trying to cycle to his mother, but doesn’t know if he’s on the right road. We, too, move forward in much ignorance; the current pandemic leaves the future murky in the extreme. Yet if it’s unclear where we’re going, there’s value at least in travelling by a joyous means, one that provides good company and fosters mindfulness.

That way, though we wander, we do less harm. 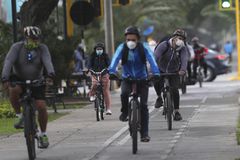