Sara Hastings-Simon is a research fellow at the University of Calgary’s School of Public Policy.

Blake Shaffer is an assistant professor of economics and public policy at the University of Calgary. He previously worked at BC Hydro and Transalta Corporation.

When the last spike was hammered into the ground at Craigellachie, B.C., in 1885, Canada’s original nation-building project – an east-west railway connecting the country – was finished. The completion of the complex and controversial Canadian Pacific Railway would set the economic stage for a successful Confederation as markets became viable across a fledgling nation that was less than 20 years old.

Fast forward 135 years later, and the rhetoric around nation-building now revolves around infrastructure of a different sort: pipelines that can carry natural resources to market across Canada and overseas. And much like the railway, such pipelines have sparked a number of heated debates around provincial priorities, the rights of Indigenous peoples, the environmental impact of oil and gas extraction, and the economic future of the industry.

Lost in this conversation, though, the other interprovincial blockage in market access for another type of energy resource: electricity.

Canada’s electricity system currently largely runs north-south, connecting hydro resources in the north to load centres in Canada’s south and beyond (Canada consistently ranks in the top three for exports of electricity globally). The ability to move power east-west has always been, and remains, limited.

But that may be changing. The federal government’s announcement on March 2 – that it will contribute $18.7 million to increase the transmission capacity between Manitoba and coal-reliant Saskatchewan – increases the potential for electricity trade between the Prairie provinces.

However, the way in which we speak about connecting our provincial power grids doesn’t help. “Ottawa says the hydroelectricity in Manitoba deserves to be shared,” one recent headline blared. Elsewhere, talk of expanding the electricity inter-connection between Alberta and B.C. has often been framed as a way to benefit B.C., as a quid pro quo for accepting a pipeline in return.

The underlying premise of this thinking is that electricity transmission only offers a one-way route for power to flow, as if electricity were like oil and gas on pipelines exiting Western Canada, with benefits accruing solely to the hydroelectric-dominated provinces.

That thinking is wrong. Electricity transmission is an opportunity for two-way trade with benefits to many stakeholders on both sides of the lines. And we must better understand them so that benefits are not ignored or misunderstood, leading to parochial political opposition to interprovincial lines being built.

So who stands to benefit?

First, yes, there are the hydro generators. By providing electricity to neighbouring provinces during their times of need, BC Hydro, Manitoba Hydro and Quebec Hydro will all benefit as they expand their ability to capture the high value of their dispatchable product. As Crown corporations, this directly benefits their provincial citizens.

Second, consumers on both sides of the power lines benefit from lower prices. More transmission access means the potential to source cheaper alternatives than domestic possibilities allow. Consumers in hydro-rich provinces gain access to electricity from renewables such as wind and solar at even lower prices than their hydroelectricity, while consumers in provinces that lack hydro can benefit from the capacity it provides at a lower cost than local alternatives. The analog to general trade principles applies – trade allows connected regions to benefit from each other’s comparative advantages, lowering costs to consumers.

Third, and perhaps less obvious, are the renewable generators. Not only were Alberta and Saskatchewan blessed with abundant oil and gas resources, but they also have among the best wind and solar resources in the country. With the costs of wind turbines and solar panels falling, many renewable sources are now the cheapest form of new electricity generation in Canada. Increasing transmission capacity with neighbouring provinces creates a bigger market for power generated by wind and solar – allowing provinces such as Alberta and Saskatchewan to receive a higher price for their renewable electricity and build out more of the resource as a result. This translates to investment, construction jobs, lease payments to landowners and a tax base for rural municipalities.

Trade does, of course, produce some losers – in this case, natural gas-fired generators, the higher-cost alternative to providing needed generating capacity in non-hydro provinces. In places fervently set on promoting their oil and gas industry above other forms of energy, along with vested interests in the electricity sector, this can present as a political challenge, with consumers potentially losing out.

Looking forward, taking on the challenge of climate change will require electrifying more activity – from industrial processes to transportation – and doing so from a decarbonized grid. Improving transmission connections coast to coast across Canada – but especially from B.C. through to Manitoba – offers a path forward, not as a way to replace the energy from retiring coal plants with hydro, but as a way to enable more low-cost renewable energy to be built with lower costs of managing their variability through two-way trade with hydro provinces.

In addition, a national plan to build out our electricity-transmission infrastructure could also provide a worthy outlet for the economic stimulus that will surely be needed when we emerge from the coronavirus pandemic that the global community faces today. Capitalizing on minuscule interest rates, the economic recovery effort can leave a legacy of infrastructure upon which deeper decarbonization of our electricity grids can occur.

And so, just as a ribbon of rail prompted a nationwide rethink of what was possible in a fledgling country, we could today benefit from a nation-building project that unites Canadians around the challenge of climate change by providing benefits to those across the country. Canada could sorely use it.

Opinion
In the midst of converging crises, the Green New Deal is the answer
March 15, 2020 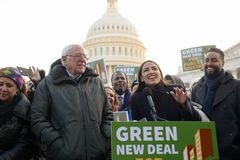