Once upon a time, Boris Johnson was considered a “true blue” British Conservative.

As an opposition Tory MP in 2002, he railed against Britain’s “top-down, monopolistic” National Health Service and chastised the Labour government of the time for raising taxes to expand the NHS instead of dismantling it. Later, Mr. Johnson championed his country’s withdrawal from the European Union to escape the edicts of Brussels-based bureaucrats and vowed to turn Britain into a low-tax Singapore-on-Thames.

On Tuesday, the now-Prime Minister’s government rammed through a £12-billion ($21-billion) payroll tax increase to fund the NHS, breaking a 2019 campaign promise and completing the transformation of the Tory brand. Under Mr. Johnson, the Conservatives are treading on traditionally Labour Party turf as apologists for big government.

To some observers, Mr. Johnson’s Tory makeover is a smart strategy. It squeezes Labour, which has descended ever deeper into identity politics, threatening its grip on its once loyal base of working-class voters. But it has also left many Tories wondering what, if anything, their party stands for.

“The Tories are supposed to be the party of light-touch politics, of sound finance and tight spending, relying on the invisible hand of entrepreneurship, supported by a low-tax economy, to drive individual wealth creation and thus a prosperous nation,” wrote Daily Express columnist Paul Baldwin. “In this Through the Looking Glass world, the Tories haven’t just repositioned to the centre. … [T]hey have made significant inroads into full-on socialist territory once the preserve of the Labour stalwarts.”

Mr. Johnson’s government adopted the bill to raise the National Insurance contribution paid by employers and workers to fund the NHS only six days after introducing it. The legislation also capped lifetime out-of-pocket costs for long-term care that British seniors will be required to pay in the future.

Backbench Tory MPs complained they were given no time to study or amend the bill. Many considered the tax hike a betrayal not just of a campaign promise, but also of the tax-cutting ethos that had been the party’s calling card since Margaret Thatcher – though to be fair, that image had already taken a hit after Mr. Johnson announced a corporate income-tax increase in his March budget.

In the end, just 10 Tory MPs voted against the health tax increase, while several more abstained. But the unhappiness in Tory ranks is likely to linger and could end up causing Mr. Johnson grief in the future. One of the abstainers, Julian Knight, tweeted: “By doing this we are forever going down the road that the answer to social care is found through big government and higher taxes.”

Mr. Johnson defended his decision to raise the health payroll levy by 1.25 percentage points as the “right, reasonable and fair approach,” saying the pandemic had left the NHS with a huge backlog of surgeries and exposed large gaps in long-term care. “So we must now help the NHS to recover, to be able to provide this much needed care to our constituents and the people we love – and we must provide the funding to do so now,” he told the House of Commons, referring to the NHS as “the pride of our whole United Kingdom.”

Critics charged that the tax increase will hit middle-class workers hardest and discourage businesses from hiring, while wealthy pensioners will be spared from paying the levy. They also complained that Mr. Johnson is only papering over problems by injecting more money into the NHS instead of moving to reform the public health care system to increase efficiencies, as he himself once advocated.

To be sure, if the NHS wasn’t already widely considered a cherished British institution before COVID-19, the pandemic has only vastly enhanced its sacred-cow status. As a result, most British voters support an increase in funding for the NHS. Mr. Johnson’s government faced a choice between raising taxes to pay for it or borrowing more and pushing Britain even deeper into debt. With the country’s debt-to-GDP ratio surpassing the 100-per-cent mark on the heels of pandemic-related borrowing, there were financial risks to running even bigger deficits to fund the NHS.

Still, Mr. Johnson’s decision to ram through the payroll tax increase without debate sticks in the craw of many of his own backbenchers. And it plants the seeds for a future caucus revolt. Health Secretary Sajid Javid, a former chancellor of the exchequer with possible leadership ambitions, has insisted there be no further tax increases before the next election.

Mr. Johnson’s embrace of big government threatens to thrust the British Conservative Party into an existential crisis. The voices of dissent from within the party are likely to grow louder, especially if opinion polls continue to show Tory support dropping.

It may only be a matter of time before a self-proclaimed “true blue” rival to Mr. Johnson steps forward. 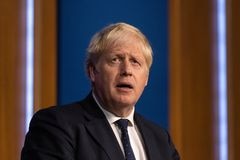 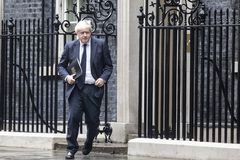 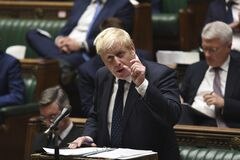