Konrad Yakabuski
Published May 13, 2021 Updated May 13, 2021
For Subscribers
Comments
Text Size
Please log in to listen to this story. Also available in French and Mandarin. Log In Create Free Account

The results of last week’s local council elections in Britain confirmed a realignment that has been under way across the West in the past few years: Working-class voters are fleeing parties on the left that they no longer trust to represent their interests.

The British Labour Party’s defeat in those elections, as well as in a by-election in a riding previously considered a Labour stronghold, vindicated Conservative Prime Minister Boris Johnson’s move to embrace bigger government while eschewing the extreme political correctness of the progressive left that now controls Labour.

Despite his aura of dishevelment, Mr. Johnson knows how to read the political winds. His Tory predecessors David Cameron and Theresa May touted sound fiscal policies – decried as austerity by their critics – and betrayed deep ambivalence toward pro-Brexit populists. And so, Mr. Johnson has thrown fiscal rectitude out the window and went all-in on getting Brexit done. He is now even winning respect from centrist skeptics and is expanding the Tory tent along the way.

It helps that Britain is set to emerge from the COVID-19 pandemic before almost any other country owing to its exemplary vaccination efforts. On Monday, no new COVID-19 deaths were reported in England, a first in 14 months. Mr. Johnson’s chaotic management during the pandemic’s first wave has apparently been largely forgiven as his government got jabs in arms with Swiss watch-like precision. A scandal over the use of donor funds to decorate the Prime Minister’s residence has not done him irreparable damage – at least not yet.

It helps the Tories even more that Labour has descended deeper into internecine warfare under the leadership of Keir Starmer, a lawyer chosen to replace Jeremy Corbyn after he led the party to its worst electoral outcome in 80 years in 2019.

Last year, the Labour Party suspended Mr. Starmer’s predecessor after a report by Britain’s Equality and Human Rights Commission condemned Mr. Corbyn’s handling of complaints about antisemitism within Labour ranks. Mr. Corbyn, a long-standing critic of Israel and defender of the Palestinian cause, was himself accused of stoking antisemitism. His opposition to Israel naturally made him a heroic figure among both young and old wokes on campus, but toxic to mainstream voters who found him uncompromising and scary.

Mr. Starmer set out to straddle the centre, but has only ended up appearing indecisive. The Corbyn wing of the party remains as vocal as ever, and Mr. Starmer has often let it set the agenda. He has been largely overshadowed on the national scene by London’s Labour Mayor Sadiq Khan, who earlier this year formed a new Commission for Diversity in the Public Realm with a mandate to determine “what legacies should be celebrated” with public monuments.

“The majority of London’s statues, street names and memorials largely reflect Victorian Britain, but the Mayor wants to tell the full story of the capital,” the commission’s website says. The 15-member panel “will focus on increasing representation among Black, Asian and minority ethnic communities, women, LGTBQ+ and disabled groups.” Critics argue the commission is stacked with cancel-culture warriors.

Whatever one thinks of the worthiness of the exercise, the preoccupations of Labour elites in London are clearly out of sync with those of working-class voters in the West Midlands and the north of England. Once-diehard Labour supporters who helped the party build a seemingly impenetrable “red wall” in those regions are identifying less and less with Labour’s culture-war crusades and wishy-washiness on Brexit. They feel Mr. Johnson’s Conservatives better represent their interests and values.

A similar political realignment is under way in many Western countries. U.S. President Joe Biden may call his infrastructure proposals a “blue-collar blueprint to build America,” but the progressives leading the Democratic Party continue to alienate working-class voters by making racial justice the dividing line in U.S. politics.

In this country, New Democratic MP Niki Ashton held an online discussion in March with Mr. Corbyn, whom she hailed as a “champion for justice.” The entire discussion was stubbornly detached from the preoccupations of working-class voters – indeed, of most ordinary voters. It epitomized the self-indulgence of wokes.

Mr. Johnson, meanwhile, is rumoured to be preparing to call an early general election as the infighting in the Labour Party further undermines Mr. Starmer’s approval rating, which is now worse than Mr. Corbyn’s was just before he was ousted.

While anti-Brexit Scottish nationalists pressing for a second referendum still pose a political problem for Mr. Johnson, he can ironically count on the European Union officials he previously sparred with to discredit the notion that an independent Scotland could easily gain entry into the EU. National governments in Spain, France and Italy are not about to do anything to encourage the regional autonomist movements seeking to break up their own countries.

For now, at least, Mr. Johnson is sitting in the political sweet spot. 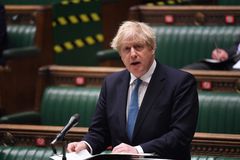 Hugs and pints in the pub are back: Boris Johnson lifts some of Britain’s COVID-19 curbs
May 11, 2021