Mark Kingwell is professor of philosophy at the University of Toronto

Walt Whitman, poet and apologist of America, was a fan of baseball. “I see great things in baseball,” he said. “It’s our game – the American game. It will take people out-of-doors, fill them with oxygen, give them a larger physical stoicism. Tend to relieve us from being a nervous, dyspeptic set. Repair these losses, and be a blessing to us.” Baseball, he added, “belongs as much to our institutions, fits into them as significantly as our constitutions, laws; is just as important in the sum total of our historic life.”

Alas, it’s not certain Whitman said these things; and worse, it’s not true that baseball can do anything like this. Beset by the usual quota of domestic-abuse and drug- enhancement charges, baseball is no sane person’s version of the idyllic American pastime. The best thing you can say about baseball, in fact, is that it’s not as bad as football.

I was in Cooperstown, N.Y., last week, speaking at the Baseball Hall of Fame. The best academic conference on the continent takes place there every spring, and I delivered my talk on Whitman and baseball versus F. Scott Fitzgerald on football. Fitzgerald, Princeton-proud, was a gridiron fan. His hero was Hobey Baker, captain of the Princeton Tigers football and hockey squads, later killed while flying in France during the First World War, and probably the model for heroic Allenby, the golden boy of the Princeton sections of This Side of Paradise.

Fitzgerald thought baseball was “a boy’s game, with no more possibilities in it than a boy could master.” It was, he argued, “a game bounded by walls which keep out novelty or danger, change or adventure.” When he came to write The Great Gatsby, baseball meant the fixing of the 1919 Black Sox scandal by Gatsby’s gangster friend Meyer Wolfsheim, and the youthful self-improvement regime of Jimmy Gatz – later transmuted into the Oxford cricket exploits of poncy, self-invented Jay Gatsby.

The details change, but the big stories remain the same. Football can no longer fancy itself the crucible of character that Scott celebrated a century ago, with morally clean heroes at Ivy League colleges facing “foursquare to the wind.”

His notions of novelty, danger, change and adventure now mean the following: (1) a cruel, perhaps criminal, complicity about recurrent and routine concussions; (2) a policy on anthem observance that amounts to a punitive share-cropping threat; and (3) a system of non-cheering cheerleaders, hired to consort with male fans, which is at best averted-gaze pandering and, at worst, full-on pimping.

None of this should be surprising. The President of the United States, who thinks his own daughter is a hottie and who stated that grabbing women by their crotches is acceptable, indeed laudatory, male behaviour, has the unmitigated gall to “disinvite” the Philadelphia Eagles football team, winners of the Super Bowl, from a White House celebration. The stated reason for this absurdly childish about-face: Some of the Eagles did not conform to his own notion of what counts as nationalistic obeisance.

For the record, none of the Eagles even took a knee during last season’s national-anthem observances, unlike other “sons-of-bitches” the President said he would prefer to see removed from the game, or even the country, for their lack of proper gratitude. The brave Colin Kaepernick isn’t even close. These Philly players were offered disrespect because they failed to demonstrate proper deference to a clown. This, friends, is what fascism looks like.

After my Cooperstown talk, a colleague approached me and said, as baseball people often will, “Baseball is what America wants to be; football is what it is.” That’s true as far as it goes. NFL football is perhaps the most evil sport ever to blight the planet. It is exploitative, violent, morally vacuous, corporatized and now indivisible from the most corrupt White House the great republic has ever witnessed.

Baseball offers very little Edenic respite from that. If only baseball were as perfect as we want it to be. But it isn’t, because nothing is. Contra Whitman, there is no cure for American dyspepsia here, just more indigestion.

Still, as in the game so in life: Three strikes and you’re out. We must admire the personal steadfastness of those Eagles who won’t trek down I-95 to dignify the current President with their presence. Nevertheless, the sport they play is comprehensively tainted. Boycott the NFL now, fans, before the next season starts. Turn the TV off. Do it. You’ll thank me later. And yes, everyone’s invited. 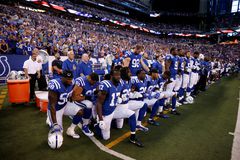