Debra Thompson is an Associate Professor of Political Science at McGill University.

Breonna Taylor is dead. She was incontrovertibly killed by police gunfire on March 13. A grand jury, convened by Kentucky Attorney General Daniel Cameron, decided last week that none of the police officers involved in the shooting would face homicide charges – not even involuntary manslaughter. Instead, one of the officers, former Louisville police detective Brett Hankison, was indicted on three charges of wanton endangerment. The bullets that pierced the apartment next to Ms. Taylor’s were of more legal consequence than those that ended her life.

Here we are again.

The grand jury decided that the events that led the police to shoot and kill Breonna Taylor were all perfectly legal. Improperly executed, perhaps, but legally justifiable nevertheless. The sole function of the grand jury is to safeguard the democratic right to a fair trial by protecting defendants against potentially meritless charges brought forward by overly ambitious or aggressive prosecutors. However, grand juries are the tools of prosecutors. A former Chief Judge of New York State once said that district attorneys have so much power over grand juries, they could get a grand jury to indict a ham sandwich.

Here we are again. Mr. Cameron called for calm during his press conference on September 23. “Mob justice,” he proclaimed, “is not justice.” Protestors took to the streets and at least 127 were arrested that evening, including Attica Scott, the only Black woman in Kentucky’s state legislature. She faces a felony charge of first-degree rioting – the same class of felony that Mr. Hankison is charged with for blindly shooting into Taylor’s home.

Here we are again. Earlier this month Louisville officials settled a wrongful-death lawsuit brought against the city by Ms. Taylor’s family for $12 million USD. Cities such as Chicago, Philadelphia, New York, and Los Angeles regularly pay millions of dollars to settle police misconduct cases. For cities with large police forces, the violation of citizens' constitutional rights is, literally, business-as-usual.

Here we are again. We only know of Breonna Taylor because of relentless pressure from her family and the public over the past six months. The phrase “arrest the cops that killed Breonna Taylor” has been repeated over social media millions of times. Actors, athletes, and musicians added their voices to the fray. High-profile gestures were made by WNBA players, who dedicated their season to Ms. Taylor, and Oprah Winfrey, who gave up her usual cover photo on the September issue of O Magazine to instead feature a portrait of Breonna Taylor.

There are, of course, singularities that make Ms. Taylor’s death and its aftermath unusual. Many questions remain about the way the case has been handled by Louisville officials. On Monday, a member of the grand jury filed a motion to release recordings and transcripts of the normally secret deliberations, accusing Mr. Cameron of “using grand jurors as a shield to deflect accountability and responsibility.” Though in his press conference last week Mr. Cameron called criminal justice “the quest for truth, evidence and facts, and the use of that truth as we fairly apply our laws,” on Tuesday evening he revealed that he did not recommend homicide charges to the grand jury. In a rare, implicit acknowledgment that police practices could amplify dangerous situations, in June the Louisville City Council unanimously voted to ban no-knock search warrants and mandate that officers wear body cameras during searches.

And yet, here we are again. Breonna Taylor is dead and no one is responsible.

The situation is tragically familiar, recurrently soul-crushing. It is another assault on the rule of law, the most fundamental of our democratic values. We all must be treated equally under the law. No one – neither the police, nor the president – is above the law. In some ways, the preservation of democracy requires that those with the enormous responsibility of safeguarding the citizenry be held to even higher standards than the rest of us.

This does not happen. The most violent arm of state power has proven time and time again that it is incapable of holding itself accountable for violating its own rules.

The inevitable outcome of this iterative democratic breach is that our expectations for justice, the so-called “quest for truth,” are dulled and diminished. We can predict, with devastating precision, that we will soon have to protest another death at the hands of the police. It’s only a matter of time. Despair breeds both outrage and indifference.

This is why we must continue to Say Her Name. This campaign, spearheaded by legal scholar 'Kimberlé Crenshaw and the African American Policy Forum, brings attention to the specific forms of police violence against Black women. In particular, Say Her Name highlights the ways that Black women and gender nonconforming people are targeted through the over-policing of low-income communities of colour and the criminalization of poverty, are engaged by the police because of their lack adequate access to health care, or are considered collateral damage in police efforts to capture their “real” targets – Black men.

Most of all, Say Her Name revokes the silence and the erasure of Black women’s deaths at the hands of the police.

We Say Her Name to reject the normalcy of police violence against Black women. Because we shouldn’t have to be here, again. 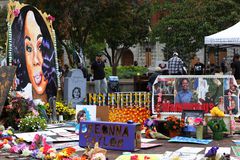 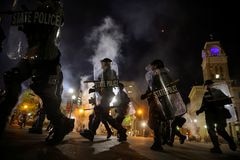