School boards across the country do not allow for religious or philosophical exemptions for students to come to school with head lice. You must kill the monstrous things – or at least have taken a few steps to do so – in order to send your child back to school.

Yes, it is very sad that the bloodsuckers’ nervous systems go haywire as they die, and maybe you have reservations about slathering chemicals on your child’s head to rid them, but the school boards’ primary concern is about preventing an outbreak, not about parents’ feelings on doing so.

This is an imperfect comparison to immunization requirements, currently upheld in just two provinces, Ontario and New Brunswick, for students enrolled in public school. For one, there is no provincial legislation around head lice in school (but just wait until they evolve to super-resistant demons) and there is no way to inoculate against head lice beforehand – just treatments after the fact. Only students with confirmed cases of head lice, like confirmed cases of measles, are required to stay home.

But by allowing religious or philosophical exemptions for unvaccinated students – and in most provinces, having no vaccination requirements at all – we permit students to sit in classrooms incubating certain preventable illnesses, potentially transmitting them to immunocompromised students or other vulnerable community members. The situation is not unlike allowing a student to come to school with a quiet case of head lice, except these lice could leave you permanently disabled or dead.

There is a very good case for more provinces to get on board with immunization requirements. The science on vaccines is that they are overwhelmingly safe and effective (RIP my inbox); once-eradicated diseases are making a comeback in Canada; classrooms are stock exchanges for germs and disease; and religious and other Charter rights in Canada are not absolute. The state can, and routinely does, put limits on individual freedoms in the interest of health and safety.

But New Brunswick Education Minister Dominic Cardy might have gone too far by pre-emptively invoking the notwithstanding clause – which seems to be all the rage these days among provincial governments – in his bill to eliminate non-medical exemptions for vaccinations. The new law would mean that only students with medical exemptions would be permitted to enroll in school unvaccinated.

Mr. Cardy said the province included the notwithstanding clause to pre-empt legal challenges from “an organized, well-financed lobby out there that's intent on derailing efforts to protect vulnerable children.”

But as Mr. Cardy surely knows, that organized, well-financed lobby will not be thrown off by the inclusion of one little clause. Indeed, Section 33 of the Charter of Rights and Freedoms does not neuter all potential legal challenges, as premiers François Legault in Quebec and Doug Ford in Ontario can certainly attest.

What it does do, however, is inadvertently send the message that the government does not believe the bill could survive a direct Charter challenge on conscience and religious freedom grounds, on protections of liberty and security of the person and/or on equality provisions set out under Section 15. And that is the wrong message, especially when so much of what drives the anti-vaxxer movement is rhetoric about state oppression and overreach.

But beyond simply entrenching the views of hard-core anti-vaxxers, this move risks isolating “vaccine hesitant” parents who are still susceptible to influence, but are now being bombarded with messages about the province “suspending” Charter rights. These parents need reasons to trust the establishment and health authorities. The province throwing down its trump card will have the opposite effect.

There is arguably a good case to be made under the Oakes test – that is, the test established by the Supreme Court of Canada to measure the fairness and proportionality of a law that infringes on a right or freedom – that New Brunswick’s immunization bill is reasonably justified.

Of course, there is no guarantee that a court would side with the province, although just a few months ago, Ontario’s top court deemed it a reasonable limit on religious freedom to require physicians to write referrals for procedures that clash with their beliefs. And in cases of acute illness, where for example, a minor requires a blood transfusion, the state will override a parent’s religious objections.

But these are imperfect comparisons, much like comparing measles with head lice. Vaccines don’t prevent imminent death in the way a blood transfusion can, and injecting medicine is a physical burden unmatched by the imposition of a doctor providing a referral.

Yet mandating vaccinations, despite the potential Charter infringement, might nevertheless be justified for the sake of preventing outbreaks, maintaining herd immunity and protecting immunocompromised students. New Brunswick’s government should make that case, without the notwithstanding clause. 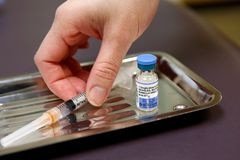 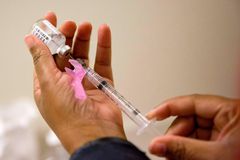