Tensions over Kashmir, the border region that’s contested by India and Pakistan, have simmered and flared for more than seven decades. But earlier this month, India’s government decided to strip the special region of the autonomy guaranteed to it in its constitution since Kashmir became quasi-independent in 1947 and institute a two-week military lockdown. Pakistan, which claims the region as its own and has fought three wars with India, has predictably pushed back.

And stepping into the breach, urging multilateral peace, is China.

The fact that Beijing wants to involve itself in finding peace between two other countries dealing with governance problems may be something of a surprise, given the international attention currently being paid to the still-roiling pro-democracy protests in Hong Kong. But on Aug. 16, the United Nations Security Council held a meeting on the Kashmir issue, the first in more than 50 years. Pakistan had requested the meeting, and it was backed by China, wielding its permanent Security Council membership.

The “closed consultation” didn’t constitute a full council meeting, and after 90 minutes, it adjourned without a statement being issued. But Zhang Jun, China’s ambassador to the United Nations, told the media after the meeting that council members had been “seriously concerned” by the Kashmir crisis, including the reported human-rights situation. He added that in China’s view, Kashmir is an international issue and must be peacefully resolved in accordance with the United Nations Charter, Security Council and bilateral agreements, even though Delhi believes that Kashmir is an internal Indian affair and no other country should be involved.

It’s a clear sign that China is looking to step into an influential international role, interested in keeping peace, especially among nearby countries like India and Pakistan.

But this is a departure from four decades ago, when China kept a low international profile. Today, under President Xi Jinping, China is playing an increasingly prominent role in keeping peace, and with Pakistan being an “all-weather” friend to Beijing, and much work going into improving relations with Delhi, the Kashmir crisis is a key testing ground for this new effort.

Other countries have even started looking to it to help settle disputes. There has been talk that China could help defuse tensions between South Korea and Japan. Even though they’re U.S. allies, they’re geographically close to China, and all three countries are interested in closer economic co-operation, which is impossible in the current atmosphere of hostility between Seoul and Tokyo.

Moreover, as the United States negotiates with the Taliban to facilitate a U.S. military withdrawal from Afghanistan, Chinese diplomats have also been active, hosting a Taliban delegation to discuss the Afghan peace process in June. Lu Kang, a Foreign Ministry spokesman, said China supported the people of Afghanistan to resolve the country’s problems through talks, and that China was helping to promote such talks.

And China’s economic and diplomatic heft is clear in Beijing’s continued support of the Iran nuclear deal, even though U.S. President Donald Trump withdrew the United States from it last year.

Indeed, Mr. Trump has been seen as leading the U.S. in a retreat from its traditional role as a global peacekeeper. He did himself no favours in the Kashmir crisis when he offered last month to act as a mediator between Pakistan and India on the Kashmir issue, raising it abruptly on a visit by Pakistan Prime Minister Imran Khan, and then saying Indian Prime Minister Narendra Modi had asked for his help. Hours later, India’s foreign minister denied that Mr. Modi had made any such suggestion.

It is highly unlikely that India will accept mediation in this matter. But China is better placed than the United States in such a role if a mediator is needed.

But if China was asked by these two countries to help resolve an intractable problem, would it accept? The task is daunting, and thankless unless it is successful. But to enhance its image as an influential and responsible power in Asia, it is quite likely that China would do so and, in the process, show the world that in this new era, there is a new China – trusted by its neighbours, willing to take on tough tasks and cognizant of other parties’ sensitivities.

After Kashmir, is India becoming an illiberal democracy?
August 13, 2019 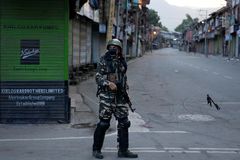 Opinion
Where are the Kashmiris? Caught between two extremes
August 9, 2019 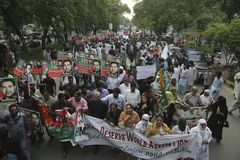