It’s time to sanction Chinese officials for their gross human-rights abuse of Canadians Michael Spavor and Michael Kovrig. As pieces in a global geo-strategic chessboard, their freedom depends on democracies standing strong together.

Accused of violating Chinese national security, the two Michaels have been deprived of meaningful legal representation and consular access in violation of diplomatic norms. Their imprisonment continues following their secret trials.

The Trudeau government’s response to China has been timid and temporizing. When the House of Commons voted to condemn the Chinese genocide of the Uyghurs, Mr. Trudeau and his cabinet were conspicuously absent. Their rhetoric has escalated, reflecting an increasingly angry Canadian public, but their meaningful actions on the two Michaels have been limited to the declaration on arbitrary detentions, and it lacks enforcement provisions.

While the Michaels await their trials’ verdicts in Chinese jails, we need to act. We need to change the calculus by which China assesses its own best interest regarding Canada. We can start by applying teeth to the arbitrary detention declaration by enlisting first the Five Eyes allies – Australia, New Zealand, Britain and the United States – and then the rest of the 61 signatories.

Canada should apply the Magnitsky sanctions against those responsible for the human-rights abuses the two Michaels have endured. We apply them against citizens of Russia, Venezuela, Saudi Arabia, South Sudan, Myanmar and Belarus, and we have just joined the U.S., European Union and Britain in applying them against Chinese officials for human-rights abuses against the Uyghurs.

We should also refuse to let family members of senior Chinese Communist Party members study in our countries. Education, especially in English-speaking countries, is highly valued by the Chinese. President Xi Jinping’s daughter went to Harvard. You can be sure Chinese mothers and grandmothers will similarly be on to their spouses to have their children educated abroad. Publishing the beneficial ownership of assets in Canada held by Chinese Communist Party members would also be a good move. There will be squirming in Beijing.

As for the 2022 Beijing Winter Olympics, Chinese athletes are training at Calgary’s excellent facilities. Former ambassador to China Guy St. Jacques has suggested we send them packing. The House of Commons resolution wants the Games out of China. All athletes need to ask themselves: Do we really want to compete in a country that violates the spirit of the Olympic movement daily?

We got into this mess because the U.S. requested the arrest and extradition of Huawei’s chief financial officer, Meng Wanzhou, on allegations of bank fraud, as she was flying through Vancouver. China has since claimed that the U.S. leaned on others to detain her while in their countries, but there were no takers. We acted, apparently without a careful evaluation of consequences. It’s too late now, but John Manley got it right when he said we might have shown some “creative incompetence.” It’s a reminder why we need a first-class diplomatic service possessing experience, expertise and a sense of realism so we avoid these traps.

We have entered an era of strategic competition with a systemic rival. Xi Jinping is the most aggressive and dangerous Chinese leader since Mao Zedong. Mr. Xi draws his inspiration from Mao rather than the more pragmatic Deng Xiaoping. Mr. Deng and his successors practised Mr. Deng’s dictum “hide your strength, bide your time.” For Mr. Xi, “the East is rising and the West is declining.”

As demonstrated last week in Anchorage, Alaska, relations between the U.S. and China will be a mixture of competition and co-operation. The democracies need to stand together in enforcing freedom of navigation in the Indo-Pacific, combatting cyberintrusions and in enforcing standards on transparency in the digital economy.

Continuing talks at various levels and with different players will be essential to avoid falling into a new cold war. Distinguishing between what is dangerous and what is workable will put a premium on diplomacy. The goal must be to manage confrontations and avoid conflict. We need fail-safe mechanisms to prevent military miscalculations.

The two Michaels are pawns in a bigger geopolitical confrontation between autocracy and democracy. The democracies, especially middle powers such as Canada, need to reassess their foreign policies, going beyond the transactional to ensure that our values are forefront when addressing transnational threats.

It means more attention and investment in security, intelligence and defence. We must continue to engage China in trade and people-to-people contact, but with our eyes wide open, avoiding both wishful thinking and paranoia. Mutual hostility and isolation serve no one’s interests. Just ask the two Michaels. 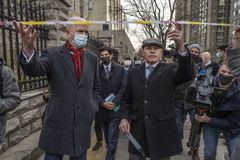