Rick Hillier is a retired general and a former chief of the defence staff of the Canadian Forces.

Life is busy in Canada and for that reason, there seems to be only a fleeting moment in November when any of us pay attention to our history. Nevertheless, Canadians need to remember because in the mud and horror of the First World War, our nation was forged.

On the Somme in 1916, with the French bleeding at Verdun and most of northern France and Belgium occupied by Germany, the British and Canadians had to do something to lessen the chance of France collapsing. But lessons from the American Civil War and earlier battles in this war, if learned, were not applied. On Day 1, there were 60,000 British Empire casualties, of whom some 20,000 died.

This was a war still led largely by gentlemen, the so-called natural leaders. They believed their gallantry and valour would be sufficient to win the day. So much so that the night before battle, one brigade commander and his officers focused more on what the troops would eat for breakfast the next morning, instead of how they would fight. This amateurism was felt everywhere, but nowhere more than the Newfoundland Regiment. Some 800 Newfoundlanders went “over the top” in the early morning on July 1, and, in just an hour, most became casualties. Only 68 were available for duty the next day. By its end, the Battle of the Somme had become an unmitigated disaster, with more than 500,000 casualties during 147 days of fruitless dying for just kilometres of territory.

Canadians distinguished themselves by learning from that disaster. With a team led by Arthur Currie, perhaps Canada’s greatest military leader, they assessed what had happened, what had gone right and wrong and how to improve. The Canadian Corps used those lessons at every level to change the way they led, prepared and trained, and hence changed the way they fought. This experience culminated in victory later on Easter Monday, April 9, 1917, when the Canadians took Vimy Ridge.

Supported by thousands of British soldiers, confident and thoroughly prepared for battle, they emerged from tunnels at 0530 hours and attacked through snow, mud, barbed wire, machine-gun fire and artillery barrages. By noon, most of Vimy Ridge had been captured, the Germans displaced and our military reputation forever changed. For the rest of the war, wherever the Canadians were, their presence presaged an attack in the minds of the Germans, because we were the shock troops who brought success.

In the fall of 1917, the Canadian Corps, now with General Currie commanding, were sent to Passchendaele where one of the most horrific and futile battles was under way. Our sons arrived on a landscape churned into endless mud, water and destroyed bodies from previous battles by more than four million shells fired at the Germans. My great-uncle, Private John Clark, was among those who fought there. He arrived in Belgium in early summer of 1917 with the Newfoundland Regiment. He became a runner – responsible for running orders and messages between commanders and units. At the age of 20, on Aug. 13, 1917, he was wounded by artillery fire and died at a field dressing station the next day. He rests there still.

The arrival of the Canadian Corps in Passchendaele was a key moment in our history. General Currie insisted we would fulfill our mission in our way, with our tactics, on our timeline. He stood up for Canada, saying no one was going to tell Canadian soldiers what to do or how to do it. General Currie’s lessons shaped me and other Canadian commanders when we did our job, decades later, in Afghanistan and on other operations around the world. Passchendaele left us that legacy: We look after Canadian soldiers first. That’s a lesson we must continue to remember by looking after Canadian soldiers as they become veterans.

The True Patriot Love Foundation is a national charity that has provided more than $25-million to 750 community-based programs across Canada, delivering essential support and resources to our military and veteran families. This year, I partnered with it in the making of a documentary film Forged In Stone, which tells the story of the First World War and the one hundred years of soldiering since then, reminding Canadians of the great sacrifice and service required to build our nation and keep us strong today. We, as a nation, continue to need Canada’s sons and daughters to serve in the Canadian Armed Forces. Those great Canadians, in turn, both serving and veterans, need our support.

The film tours many battle sites of the First World War, Commonwealth War Graves and monuments. Our memorials, many of which are far away in Europe, are our physical touchstones to those moments in history when liberty and freedom were in peril. They are here to help us remember the terrible cost of defending that freedom and to honour the sacrifice of the fallen. Equally important, they are symbols both of what it takes to build a nation, and what it takes to maintain one: leadership, self-realization, confidence, maturity and constant learning.

Our growth as a nation is forever forged in those stones.

New brew, students honour those who fought in the often-forgotten Battle of Hill 70
November 9, 2018 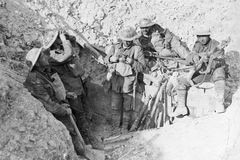 Hill 70: The carnage, courage and victory of the WWI battle Canadians forgot
March 31, 2017 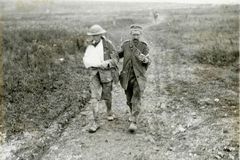 Opinion
Canada’s Siberian dead: How we’ve failed to bury the past
November 8, 2018 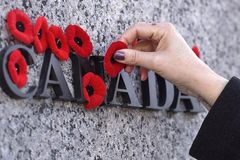