There is no issue dividing us more than the environment.

The debate around climate change has, at times, devolved into one big shouting match. And, today it’s louder than it’s ever been. Most people believe human-caused climate change is real, but far fewer agree on how to fix the problem. A new poll says a majority of Canadians favour setting emissions targets but aren’t sure carbon taxes are the way to reach these goals.

Meantime, hypocrisy abounds. Albertan’s oil industry gets singled out in the climate debate, yet there is nary a word about car makers in Ontario and jet manufacturers in Quebec. There are no protesters threatening to close the Ford plant in Oakville or Bombardier’s aerospace facilities in Dorval. They seem to get a free pass when it comes to environmentalists’ focus on industries producing significant greenhouse gas emissions.

The discussion around climate has been bogged down in recriminations and counter recriminations. The average Canadian doesn’t know who to believe or what to think.

Saskatchewan Premier Scott Moe, for instance, says the province is reducing emissions without a carbon tax. But a recent provincial report said emissions in Saskatchewan are projected to be 55 per cent higher by 2030 than 1990 levels. That sounds bad. But it also said emissions will drop by 11 per cent between 2017 and 2030.

How does anyone make sense of that? Naturally, politicians are going to twist those figures in such a way that best suits their political ends. Mr. Moe uses the numbers he wants to fight a national carbon tax. Since no one likes paying more tax, the people of Saskatchewan are lining up behind him. (As they did with Brad Wall previously). In the process, they become more entrenched in their opposition to the federal government’s plan to bring down emissions.

Precisely the same thing is happening in Alberta, where people there feel they have received nothing in exchange for the significant environmental measures the NDP government brought in. Consequently, the enmity there toward Ottawa’s climate-change measures grows fiercer by the day.

Ontario Progressive Conservative Leader Doug Ford has vowed to ditch the province’s carbon tax plan. He sees people in other provinces not paying the tax and asks: Why should the citizens of Ontario? People there are taxed to death as it is, Mr. Ford says. Find another way to reduce emissions.

People are also confused about the extent to which any tax on carbon will incite real change anyway. The Conference Board of Canada found that even a $200 a tonne carbon tax would have a relatively negligible impact on emission reductions. So what is the point? But there is no such thing as a sane, rational discussion around this subject.

Even Prime Minister Justin Trudeau’s most ardent supporters are abandoning him over the environment. Recently, B.C. Grand Chief Stewart Phillip and environmental crusader David Suzuki branded the Prime Minister a serial liar when it comes to commitments he made. Both are upset about the Trans Mountain pipeline expansion and Ottawa’s approval of the Site C dam in B.C. Both are vowing to campaign against the Liberals in the next election.

Others look at those comments and shake their head in bewilderment. Environmentalists were at war with the government of Conservative prime minister Stephen Harper, considered by many to have been an international embarrassment on the environment. Yet, any fracturing of the centre-left coalition that the federal Liberals built to achieve victory in 2015 could well mean a return to power of the Conservatives. How does that help save the planet, more moderate voices on the environment wonder?

There are people on both sides of the climate issue demanding all or nothing, who can’t see a way to compromise. This leads to the stultifying rancor we are witnessing now, which is causing many Canadians to just tune out of the discussion completely. That’s dangerous.

I sympathize with federal Environment Minister Catherine McKenna. No one has worked harder to bring about meaningful change on this file. For her efforts, she is criticized daily and forced to endure sexist and misogynistic jabs by those who disagree with her. I’m sure there are days she wonders whether it’s all worth it.

The bottom line is, however, the country’s environmental agenda is on the verge of collapse, about to be undone by political in-fighting and the reckless pursuits of self-interest and personal agendas. This is not one of our prouder moments as a nation. 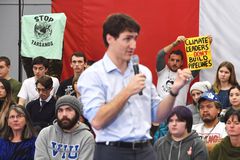