Beatrice Fihn is executive director of ICAN, the 2017 winner of the Nobel Peace Prize. She was part of the civil society delegation participating in the Women Foreign Minister’s Meeting in Montreal last week.

“Women’s rights are human rights,” Hillary Clinton famously said in 1995. Canada’s Minister of Foreign Affairs, Chrystia Freeland repeated those words in her message announcing Canada’s Feminist International Assistance Policy. Prime Minister Justin Trudeau has made women’s empowerment a pillar of his government from his gender-balanced cabinet to the push for a “feminist foreign policy.”

That feminist focus was on display last week as Ms. Freeland invited other female foreign ministers to a summit in Montreal along with a small group of female civil-society leaders. I was honoured to be invited to address that formidable gathering.

As the doors closed on that room, full of some of the most powerful women in the world, it struck me that this was the only high-level gathering I’ve attended where the men – largely staff and aides – waited outside while women made decisions. The discussion inside was not limited to traditional “women’s issues,” but was an in-depth and insightful dialogue about the great foreign-policy challenges of our time, and I was grateful for Ms. Freeland’s initiative in organizing and hosting.

Yet, in stark contrast to that leadership, Canada’s antiquated and patriarchal policies remain when it comes to the most cataclysmic weapon of mass destruction created by man – nuclear weapons.

Nuclear weapons are indiscriminate weapons of mass killing that were created specifically to target cities and civilians, and disproportionately affect women. They are inhumane and against the principles of international human-rights laws.

Women in Hiroshima and Nagasaki had nearly double the risk of developing and dying from solid cancer due to ionizing radiation exposure. Robust findings from Chernobyl indicate that girls are considerably more likely than boys to develop thyroid cancer from nuclear fallout. Pregnant women exposed to nuclear radiation face a greater likelihood of delivering children with physical malformations and stillbirths, leading to increased maternal mortality. And these effects last generations. Near the infamous Semipalatinsk-21 nuclear testing site in Kazakhstan, one in every 20 babies is born with serious deformities.

Although nuclear weapons are indiscriminate, their impact is not. These archaic weapons promote an outdated global order rooted in inequality and oppressive patriarchy. The existence and threatened use of these weapons are an affront to women’s rights that put women’s empowerment in peril.

Fear of nuclear weapons and their proliferation is now one of the top causes of concern on international issues for Canadians, according to Canada’s World Survey 2018, a 9-percentage-point increase over the past decade.

Instead of working to ban and abolish nuclear weapons, Canada continues to support its nuclear allies and their efforts to develop new nuclear weapons meant to last for decades.

In the leadership gap, other states are stepping forward. One hundred and twenty-two nations adopted the Treaty on the Prohibition of Nuclear Weapons last year at the UN. Mr. Trudeau’s government did not participate in the process and the Prime Minister even remarked that the treaty was “sort of useless.”

Dozens of other countries have signed or ratified the treaty in the past year. Canada will not be present as several more states sign and ratify the treaty at the UN this week.

Ms. Freeland should follow their strong feminist example and stand up for women everywhere by supporting the treaty. That is the type of feminist foreign policy women of the world need to bring all of us back from the brink of nuclear devastation.

Canadians and their leaders must make a decision: Will they stand on the right side of history in banning these atrocious weapons, as they have with other inhumane weapons? Or, will Canada’s feminist foreign policy speak of progress while remaining rooted in a violation of human rights – of women’s rights? That kind of leadership is, well, sort of useless.

Opinion
Ban the bomb: How the Treaty on the Non-Proliferation of Nuclear Weapons helped prevent annihilation
June 8, 2018 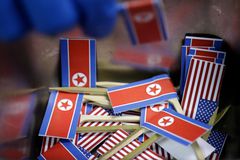