It’s difficult to conceive of a petition that might have been more misguided and more poorly timed on a health-related issue than the one sponsored by Liberal MP Ron McKinnon, who also happens to be the chair of Canada’s Standing Committee on Health.

It’s not quite at the level of, say, calling upon the government to uncover how Bill Gates engineered the novel coronavirus in order to implant the population with vaccine-delivered microchips. Or demanding an investigation into how the world was duped into believing COVID-19 is a real illness, instead of a lie propagated so governments could enforce martial law.

The actual petition, sponsored by Mr. McKinnon, calls upon the government to protect children from harmful radiation by “restrict[ing] the installation of cellular towers/antennas within 305m of all schools and playgrounds.”

The petition cites a study written by three authors (two of whom work for an organization that promulgates a connection between various technologies and cancer) that doesn’t even discuss cellular towers and radiation. Rather, the paper is a review of studies on direct cellphone use, which the authors conclude – mostly, it appears, through extrapolation and loose inference – poses “considerable” health risks to children. More comprehensive research, such as a Scandinavian study of children diagnosed with brain tumours that concluded against a causal association with cell-phone exposure, was conspicuously ignored.

Anyway, that is the paper that forms the basis of a House petition about cellphone towers — a petition that has now found support beyond conspiracy-minded parents. Indeed, groups that oppose 5G technology in Canada generally, including those who have now connected it to the COVID-19 pandemic, have latched onto the petition and shared it as evidence of the inherent danger. Many of these groups, with names such as “5G – Toronto Under Attack,” are now cheering on the spate of suspected arson attacks that have targeted cellular towers around the world; here in Canada, in recent days, four cell towers in Quebec have been suspiciously set ablaze.

The conspiracy theories around 5G and COVID-19 are not particularly dynamic. One is that the novel coronavirus doesn’t really exist, and the illness that has now plagued millions of people is actually one of 5G radiation poisoning. (That doesn’t explain why COVID-19 has sickened people in regions without 5G technology, but I digress.) Another theory is that COVID-19 was created by governments to enforce widespread lockdowns, during which they can expand 5G infrastructure. At time of writing, more than 75 towers have been set ablaze in the United Kingdom.

In Mr. McKinnon’s defence, the petition about cellphone towers in Canada was sponsored in late February, before these conspiracy theories about COVID-19 and 5G really took hold. So while it was very much a silly petition based on bad and irrelevant science back in February, it has entered into this new crackpot territory mostly by accident – as much as bad science bleeding into conspiracy-theory territory is ever really an “accident.” And Mr. McKinnon defended his decision to sponsor the petition when queried by my colleague Steven Chase, saying some of his constituents were pushing for its authorization.

But as Mr. Chase’s report points out, MPs are not required to authorize every petition brought forth by their constituents. Indeed, one would think the chair of the Standing Committee on Health – a body purportedly guided by science and evidence – would be considerably more discerning in deciding where to lend his authority, particularly on conspiracy-laden matters of public health.

According to the House website, MPs cannot withdraw their authorization of a petition after it is offered. But MPs can, outside of the House, repudiate the petition’s premise and emphasize their disagreement with its request, if applicable. Mr. McKinnon, however, has remained mostly silent. That is flatly unacceptable. He cannot at once serve in a health-related position and also pretend that his name is not on a flimsy petition that has been seized upon by conspiracy theorists. One or the other has to give.

Prime Minister Justin Trudeau, Health Minister Patty Hajdu, Industry Minister Navdeep Bains and others in government have all spoken out against the recent spate of vandalism on cellphone towers. They have pointed out, rightly, that damaging critical infrastructure at this time only serves to make it harder to communicate with others when this technology offers one of the only means to do so. Deputy Prime Minister Chrystia Freeland, when asked about the cell tower fires, went even further: “Misinformation is especially dangerous at a time like this,” she said. “It’s a time of both heightened anxiety and tremendous change. And so, disinformation can have a particularly pernicious effect.”

Perhaps she should relay that message directly to her caucus-mate Mr. McKinnon. Misinformation is indeed pernicious – especially when it has the explicit authorization of the chair of the Standing Committee on Health. 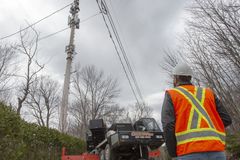 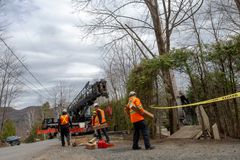